There are many resources available at the federal, state and local levels to assist in the management of disasters and emergencies.

There are many resources available at the federal, state and local levels to assist in the management of disasters and emergencies. Disasters are often assigned levels, which indicate the anticipatedlevel of response (Chart 72-1). A list of the local resources with specific instructions about how and when to contact them should be readily available and frequently reviewed for needed updates. The following are a few of the resources that may be of assistance during a mass casualty incident (MCI) or a disaster. 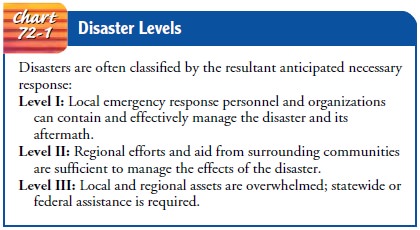 Federal resources include organizations such as Department of Health and Human Services (DHHS) and the Department of Justice (DOJ). Each of these federal departments oversees hundreds of agencies that may respond to MCIs. For example, the Federal Bureau of Investigations (FBI) (under the DOJ) may be used for scene control and collection of forensic evidence. The Federal Emergency Management Agency (FEMA) can acti-vate teams such as the Urban Search and Rescue Teams (USRTs). The DHSS administers the Centers for Disease Control and Prevention (CDC) and the National Disaster Medical System (NDMS). The NDMS has many medical support teams, such as Disaster Medical Assistance Teams (DMATs), Disaster Mortu-ary Response Teams (DMORTs), Veterinary Medical Assistance Teams (VMATs), and National Medical Response Teams for Weapons of Mass Destruction (NMRTs).

The DMAT provides medical personnel who can set up and staff a field hospital; there are many DMATs located across the country. There are only four NMRTs: the mobile California, North Carolina, and Colorado teams and the Washington, DC team, which is stationary. These specialty teams were developed to respond to situations involving WMDs. They consist of spe-cially trained medical and technical personnel. The National Guard is also a resource, with some guard units functioning as Civil Strike Teams (CSTs).

Also included in federal resources are the teams from the CDC. This is the lead federal agency for disease prevention and control activities and provides backup support to state and local health departments. An additional support is available from the American Red Cross, which provides many support systems and shelter as needed.

Some of the state and local agencies may be the same agencies already listed (eg, local CDC and FBI agencies). Other state and local resources may include the American Red Cross, poison control centers, and other local volunteer organizations.

The Metro Medical Response Teams Systems (MMRS) are local teams that are located in cities deemed to be possible terrorist targets and are funded for specialty response to WMDs. Many state and federal task forces have been developed to assist in the development and improvement of civilian medical response to chemical and bio-logical terrorism.

Most cities and all states have an Office of Emergency Man-agement (OEM). The OEM coordinates the disaster relief efforts at the state and local levels. The OEM is responsible for providing interagency coordination during an emergency. It maintains a corps of emergency management personnel, including respon-ders, planners, and administrative and support staff.

The Incident Command System (ICS) is a management tool for organizing personnel, facilities, equipment, and communication for any emergency situation. The federal government mandates that the ICS be used during emergencies. Under this structure, one person is designated as incident commander. This person must be continuously informed of all activities and informed about any deviation from the established plan (Currance & Bronstein, 1999; Lewis & Aghababian, 1996; Londorf, 1995). Whereas the ICS is primarily a field structure and process, aspects of it are used at the level of an individual hospital’s emergency response plan as well.

Every facility is required by the Joint Commission on Accredita-tion of Healthcare Organizations ( JCAHO) to create a plan for emergency preparedness and to practice this plan twice a year (Burgess, Kirk, Burron, & Cisek, 1999; JCAHO, 2000). Gener-ally these plans are developed under the Environment of Care Committee or Safety Committee and are overseen by an admin-istrative liaison.

Before the basic emergency operations plan (EOP) can be de-veloped, the planning committee of the facility first evaluates the community to anticipate the types of natural and manmade dis-asters that might occur. This is not a difficult task and should be a responsibility of the local facility, safety committee, safety of-ficer, or emergency department (ED) manager. This information can be gathered by questioning local law enforcement and fire de-partments and assessing the amount of air or train traffic, auto-mobile traffic, and flood, earthquake, tornado, or hurricane activity. Consideration is given to special situations such as proximity to chemical plants, nuclear facilities, or military bases that may en-hance the community’s potential for manmade disasters. Federal, judicial, or financial buildings, schools, and any places where large groups of people gather can be considered high-risk areas.The planning committee must have a realistic understanding of its resources. It must determine, for example, whether the fa-cility has a pharmaceutical stockpile available to treat specific chemical or biological agents (Anteau, 1997; Stopford, 2000). Another scenario that might be anticipated, the dispersal of a pul-monary intoxicant or choking agent, requires that emergency op-erations planners find out how many ventilators would be available in the facility and in the community. The committee might also outline how staff would triage and assign priority to patients when the number of ventilators is limited. Multiple fac-tors influence a facility’s ability to respond effectively to a sudden influx of injured patients, and the committee must anticipate var-ious scenarios to improve its preparedness.

Once the initial assessment is complete, the facility develops the

EOP. Essential components of the plan are as follows:

·       An internal/external communication plan: Communicationis critical for all parties involved, including communication to and from the prehospital arena (Heightman, 1999; Lewis & Aghababian, 1996; Mickelson, Burno, & Schario, 1999).

·      Security plans: A coordinated security plan involving facilityand community agencies is key to the control of an other-wise chaotic situation.

·       A plan for people management and traffic flow: “People man-agement” includes strategies to manage the patients, the public, the media, and personnel. Specific areas are assigned, and a designated person is delegated to manage each of these areas (Anteau, 1997; Lewis & Aghababian, 1996).

·       A data management strategy: A data management plan forevery aspect of the disaster will save time at every step. A backup system for charting, tracking, and staffing is devel-oped if the facility has a computer system.

·       Deactivation response: Deactivation of the response is as im-portant as activation; resources should not be overused. The person who decides when the facility is able to go from the disaster response back to daily activities is clearly identified. Any possible residual effects of a disaster must be considered before this decision is made (Anteau, 1997).

·      A plan for practice drills: Practice drills that include com-munity participation allow for troubleshooting any issues before a real-life incident occurs.

·      Anticipated resources: Food and water must be available forstaff, families, and others who may be at the facility for an extended period.

The EOP should also include a structure that defines roles for all employees in each emergency situation. The most common structure is the ICS described earlier, but applied at the level of the hospital itself instead of at the site of the disaster. For exam-ple, an administrator, possibly the nurse executive, will act as In-cident Commander within the hospital and coordinate all aspects of the implementation of the plan. Other personnel will be des-ignated to perform key roles, such as resource manager or patient disposition coordinator. Such a predetermined organization is es-sential to minimize confusion, ensure that all key operations are directed, and promote a well-coordinated response.