The water on the earth evaporates into the atmosphere due to the heat of the sun. The water vapour in the atmosphere forms clouds. From the clouds water falls on the earth in the form of rain or snow. By this natural process, water gets renewed. This is called water cycle.

Water cycle is a continuous process. It involves three stages - evaporation, condensation and precipitation. It is also called the hydrological cycle.

Evaporation: Water from oceans, lakes,ponds and rivers evaporates due to the heat of the sun.

Condensation: Water vapour which enters into the atmosphere by evaporation moves upward with air, gets cooled and changes into tiny water droplets that form clouds in the sky.

Precipitation: The millions of tiny droplets collide with one another to form larger droplets. When the air around the clouds is cool these drops of water fall in the form of snow or rain.

Activity 4: Spread a piece of we cloth in the sunlight. Observe after some time. Where has the water in the wet cloth gone? 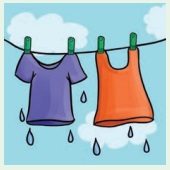 The water evaporates into the atmosphere due to the heat of the sun.

Have you heard of transpiration?

It is the process of loss of water from the aerial parts of a plant in vapour form.

There is a continuous cycling of water and it exists in three forms in nature.

These three states occur in nature, keep the total amount of water on the earth constant even when the whole world is using it!

How do you know that atmosphere has water vapour?

Let us do the following activity...

From where do water drops appear on the outer side of the glass?