The vice-President occupies the second highest office in the country. He is accorded a rank next to the President in the official warrant of precedence.

The vice-President occupies the second highest office in the country. He is accorded a rank next to the President in the official warrant of precedence. This office is modeled on the lines of the American Vice-President. Article 63 of the constitution provides for a Vice President of India. This office has been created to maintain the political continuity of the state. 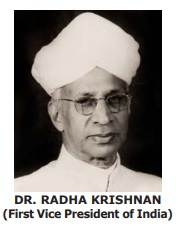 Qualification for the election as Vice President

• He must have completed the age of thirty-five years.

• He must not hold any office of profit under the Union, State or local Government.

• He should have the other qualifications required to become a member of the Rajya Sabha.

Election and term of the Vice-President

Article 66(1) the Vice-President, like the president, is elected not directly by the people but the method of indirect election. The term of office of the Vice President is five years. His office may terminate earlier than the fixed term either by resignation, death or by removal. He is eligible for re-election. Till then deputy chairman of the Rajya sabha can perform the duties of the chairman of the Rajya sabha.

Removal of the Vice President

The Vice President may be removed from his office by a resolution of the Council of States passed by a majority of all the then members of the council and agreed to by the House of the People. A resolution for this purpose may be moved only after a notice of at least a minimum of 14 days has been given of such an intention.

Functions of the Vice President

The Vice-President is Ex-Officio Chairman of the Rajya Sabha.

• He regulates the proceeding of the House.

• He decides the order of the House.

• He decides the admissibility of a resolution or questions.

• He suspends or adjourns the House in case of a grave disorder. When the President is unable to discharge his duties due to illness or absence from the country, he attends to the functions of the President for a maximum period of six months.

According to Article(100) of the Constitution, the vice-president can\only cast his vote when there is a tie over the Bill in the Rajya Sabha. It means that there is need for one vote only to pass the Bill. No members have any right to oppose his decision.