The President of India

The President of India 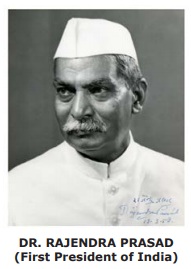 Qualification for the election as President

• He must have completed the age of thirty-five years.

• He must not hold any office of profit under the Union, State or local Government.

• He should have the other qualifications required to become a member of the Lok Sabha.

• His or her name should be proposed by at least ten electors and seconded by another ten electors of the Electoral College which elects the President.

The President cannot be a Member of Parliament or of a State Legislature; if he is a member of any legislature, his seat will be deemed to have been vacated on the date he / she assumes the office of President.

Election of the President

Powers of the President Executive Powers

Article 77 requires that every executive action of the Union shall be taken in the name of the President.

He appoints the Prime Minister and the other members of the Council of Ministers, distributing portfolios to them on the advice of the Prime Minister. He is responsible for making a wide variety of appointments. These include the appointment of Governors of States, the Chief Justice and other Judges of the Supreme Court and high Courts, the Attorney General, the Comptroller and Auditor General, the Chief Election Commissioner and other Election Commissioners the Chairman and other Members of the Union Public Service Commission Ambassadors and High Commissioners to other countries.

He inaugurates the session of the Parliament by addressing it after the general election and also at the beginning of the first session each year. This address is essentially identical in nature to a Speech from the Throne.The President summons Parliament at least twice in a year.

He nominates 12 persons who are eminent in literature, science, sports, art and social service to the Rajya Sabha. He can also nominate two persons belonging to Anglo-Indian Community to the Lok Sabha, if in his opinion, that community is inadequately represented in the House.

Annual Budget of the Central Government is presented before the Lok Sabha by the Union Finance Minister only with the permission of the President. He causes to be laid before the Parliament the annual financial statement (the Union Budget). The Constitution of India places the Contingency Fund of India is at the disposal of the President. No demand for a grant can be made except on his recommendation. He can make advances out of the contingency fund of India to meet any unexpected expenditure. He constitutes a finance commission after every five years.

Article 72 confers on the President power to grant pardons, reprieves, respites or remissions of punishment, or to commute the sentence of any person convicted of an offence.

Article 53(2) lays down that “the supreme command of the Defence Force of the Union shall be vested in the President and the exercise thereof shall be regulated by law”.

The President appoints Indian diplomats to other countries and receives foreign diplomats posted to India. The ambassador designate becomes ambassador after calling on the President and presenting his credentials. All treaties and agreements with foreign States are entered into, in the name of the President.

Kerala and Punjab are the States where the President’s Rule was imposed for maximum number of times i.e., nine times in both States.

Removal of the President

The President may by writing under his hand addressed to the Vice-President, resign his office. The President may, for violation of the Constitution, be removed from office by impeachment in the manner provided in Article 61; The Impeachment action can be brought about in the form of resolution in either house of the Parliament. It must be supported by not less than One-Fourth of the total strength of the House for its introduction. The President shall, in spite of the conclusion of his term, continue to hold office until his successor enters upon his office.