The parliament is the legislative organ of the Union government. The Parliament of India consists of three parts they are the 1) President, 2) Rajya Sabha (the council of States) 3) Lok Sabha (the House of the People).

The parliament is the legislative organ of the Union government. The Parliament of India consists of three parts they are the 1) President, 2) Rajya Sabha (the council of States) 3) Lok Sabha (the House of the People). The Rajya Sabha is the Upper House and the Lok Sabha is the Lower House it is termed as bicameral legislature. 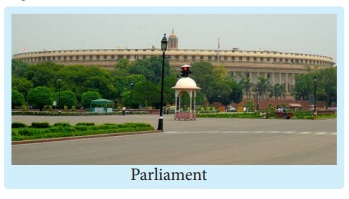 The council of State or Rajya Sabha consists of 250 members out of whom 238 represent the states and the Union Territories, elected by the method of indirect election.

The 12nominated members shall be chosen by the President from amongst persons having ‘special knowledge or practical experience in the field of literature, science, sports, art and social service.

Qualification of the Members

• He should not hold any office of profit under any Government.

• He should be a person with sound mind and monetarily solvent.

• He should not be the member of Lok Sabha or any other legislature.

Members of Rajya Sabha are elected by the elected members of the ‘State Legislative Assemblies’ in accordance with the system of proportional representation by means of the single transferable vote. This process of election is called “indirect election” as they are not elected by the people directly.

The Lok Sabha is the popular house of the Indian Parliament and contains elected representatives of the people. Maximum number of members can be elected for Lok Sabha is 552. The Lok Sabha as of today has 543 elected members. Out of these, 530 members are elected from different states and 13 members from the Union Territories. The President generally nominates two members belonging to the Anglo-Indian community. At present, the Lok Sabha consists of 545 members.

Qualification of the Members

• He should have his name in electoral rolls in some part of the country.

• He should not hold any office of profit under the Union or State Government.

• He should be mentally sound and economically solvent.

The term of the House

Generally the Lok Sabha enjoys a term of five years from the date of its first session. It can be dissolved by the President before the expiry of its term on the advice of the Prime Minister. The emergency provisions of the Constitution enable the President to prorogue or dissolve the Lok Sabha either on the advice of the Prime Minister or on being convinced that no party or no alliance of parties enjoys necessary majority support in the House.

The members of the Lok Sabha are directly elected by the people of the constituencies created on the basis of population. The Election Commission of India arranges, supervises and conducts elections to the Lok Sabha.

“Universal Adult Franchise” is followed while electing the members of the Lok Sabha. All Indian Citizens above 18 years of age who are registered as voters will vote for their representatives. 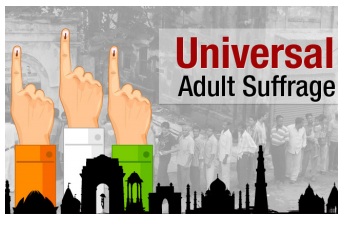 Functions of the Lok Sabha

• Any bill can be introduced and passed in the Lok sabha (Including Money Bill).

• It has the same power as Rajya Sabha to participate in case of impeachment of president and the judges of Supreme Court.

• It has equal power as Rajya Sabha in passing any bill for constitutional amendment.

Elected members of the Parliament from Tamil Nadu.

The Lok Sabha is presided over by the ‘speaker’ who is elected by its members. The office of the Speaker occupies an essential position in our Parliamentary democracy. The Speaker continues to be in the office even in the houses dissolved, till a new Speaker is elected by the new Lok Sabha. The Speaker presides over a joint sitting of the two Houses of Parliament. He has the power to decide whether a Bill is Money Bill or an ordinary one. While the office of speaker is vacant or the speaker is absent from the sitting of the house, the deputy speaker presides, except when a resolution for his own removal is under consideration.

Powers and Functions of the Parliament

• The Parliament of India has the functions of Legislation, overseeing of administration, passing of Budget, ventilation of public grievances, discussion of various subjects like development plans, international relations and internal policies.

• Parliament is also vested with powers to impeach the President and to remove Judges of the Supreme Court and High Courts, Chief Election Commissioner and Comptroller and Auditor-General of India in accordance with the procedure laid down in the Constitution.

• The Parliament has the power to change the boundaries of the States.