In most di-cotyledons there are between two and up to about six protoxylem strands alternating with phloem strands.

The vascular system can take on one of several forms (Fig. 4.4). In most di-cotyledons there are between two and up to about six protoxylem strands alternating with phloem strands. Large numbers of species have triarch (three-stranded) or tetrarch (four-stranded) arrangements, or a mixture of both. If above six strands are present, the roots are described as polyarch. Most monocotyledonous roots are polyarch. The metaxylem tracheids or vessel elements are normally conspicuous, and are on the same radial axis as the protoxylem poles, and to their inner side. This arrangement is charac-teristic of roots, and distinguishes them from stems. Root anatomy is ini-tially exarch, with the protoxylem poles to the outer side, and endarch in stems, with the protoxylem to the inner side of the metaxylem. The transition usually occurs in the hypocotyl or the top of the primary root. 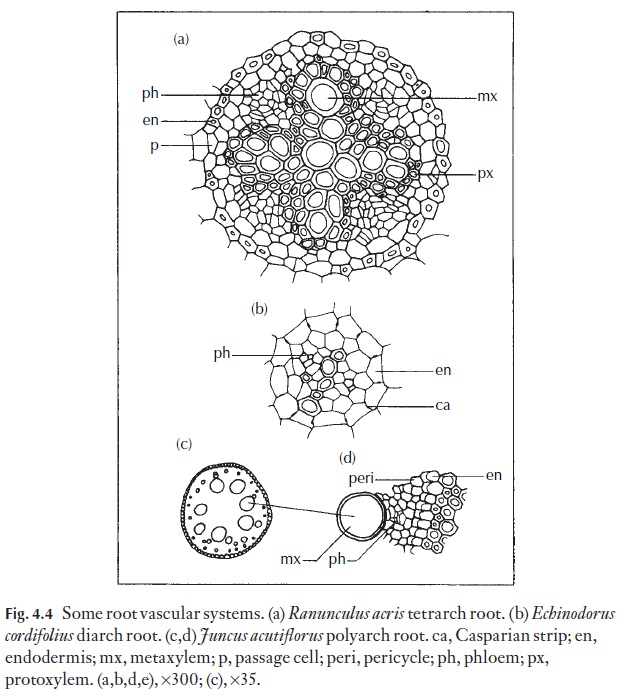 Although phloem is normally confined to the outer ring, occasional gen-era, for example Cannomois in Restionaceae, can have additional strands as-sociated with the dispersed metaxylem elements.

In monocotyledons, the vessel element is thought to have had its origin in roots; in the least advanced plants, if vessels are developed at all, they are found in the root only, and not in the stem or the leaf. The next stage of ad-vancement is for vessels to occur in the root and the stem, and in the most advanced plants vessels occur in the root, the stem and the leaf. A number of plants have shorter, wider vessel elements in the root than in the stem or leaf, bearing out the theory of the evolutionary sequence from the primitive narrow long elements to the more advanced shorter, wider elements. In supposedly primitive monocots, then, it becomes of great interest to see if vessels are present in the roots. The methods used are as described on pages 66 and 67.

Vessel and tracheid wall pittings and thickenings are similar to those of the stem wood. The phloem cells of the root also have the same range of forms as are found in the stem.

The centre of the root may be made up entirely of xylem in the dicotyle-don, or in monocotyledons or some dicotyledons especially at the base of the primary root, it may contain a ground tissue composed of parenchyma with thin or thickened walls, sometimes termed pith (Figs 4.5–4.7). Scle-reids could be present. 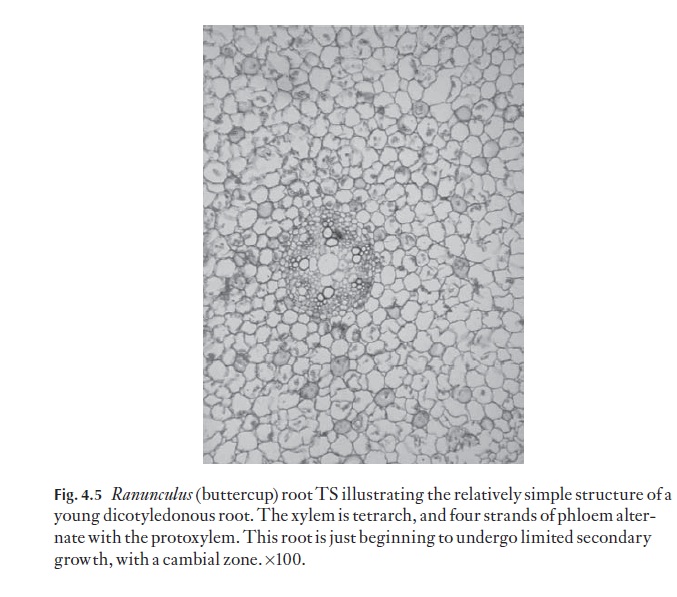 If a root is to be identified, it must be matched accurately in respect of all its tissues with authentic reference material. Descriptions and drawings are rarely full enough for one to be absolutely certain of a match. We have exam-ined roots suspected to be the food supply of underground larvae of various insects. Only by having samples of roots from all the plants growing in the region where the larvae were found was it possible to make identifications of the chewed fragments. The division into monocotyledon or dicotyledon roots is relatively simple; it is only after that that the real problems begin!

Fortunately, secondarily thickened roots of dicotyledons (all monocoty-ledon roots are primary) are much simpler to identify. Secondary thickening is described. 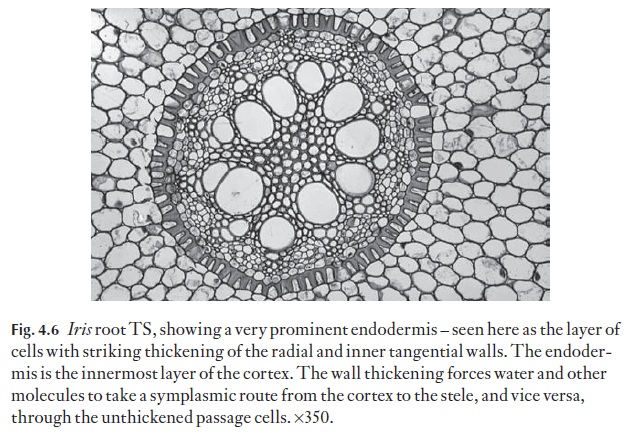 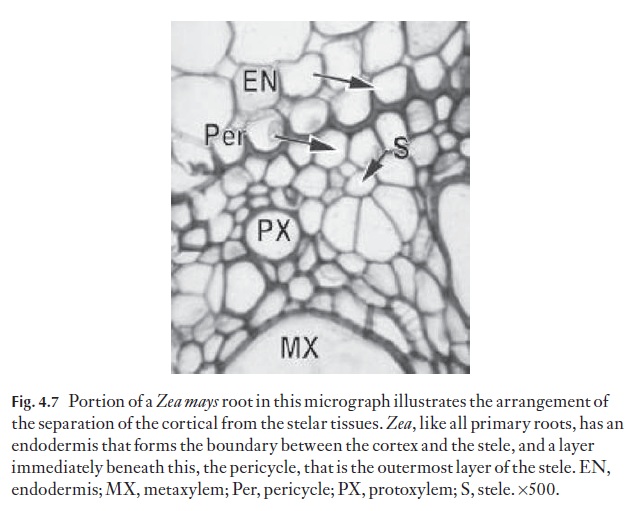