The cortex on its inner side abuts onto the endodermis.

The cortex on its inner side abuts onto the endodermis. This characteristic, physiologically active tissue is frequently one layer thick but in some plants it can be two or more layered. Although the endodermis can be composed of cells with evenly thickened walls, in the majority of plants the inner and an-ticlinal walls are more heavily thickened with lignins and suberins than the outer periclinal walls. Consequently, in transverse section they are readily distinguished from adjacent cell layers, the so-called U-shaped thickenings making them conspicuous (Fig. 4.3). 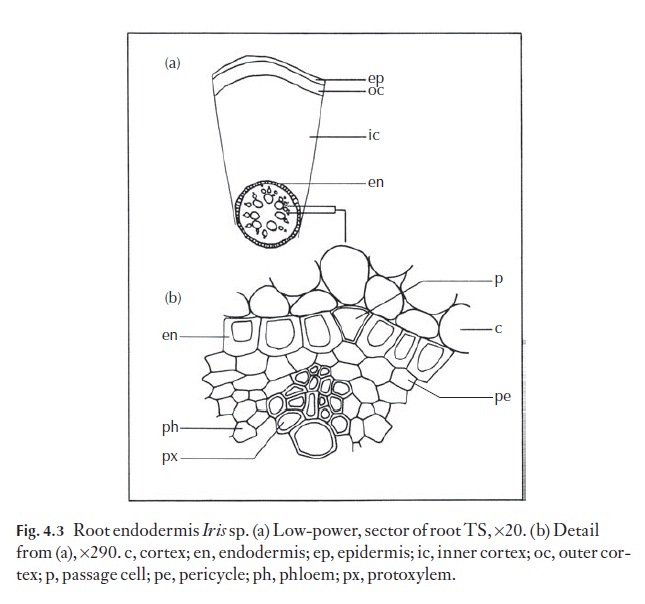 At intervals, certain cells of the endodermis are thin-walled. These are the passage cells and are usually opposite protoxylem poles. They are supposed to afford a more ready pathway from root hairs, via the cortex to the protoxylem elements, for water and dissolved solutes. The other cells in the endodermis are supposed to restrict water flow between cortex and stele. The anticlinal walls of all endodermal cells are equipped with special sub erized ‘waterproof’ impregnations, the Casparian strips, or bands with the cell membrane, the plasmalemma, attached to the Casparian strip. These are most easily seen in young, unthickened cells near to the root apex; they stain readily in Sudan III or IV. When the cells are plasmo-lysed the cytoplasm can be seen as a band because of the cell membrane being attached to the strip. Because of the range of variation in cell height and width and differences in the shape and degree of wall thickening of endodermal cells throughout the monocotyledons and dicotyledons, it is often possible to give a close description of an endodermis that is characteristic for a species or group of species. There may be many species that fit any one description, but if authenticated material is available for comparative purposes in making identifications, then a close matching of endodermis cell types must be achieved for accurate identification. As with all other minute characters, the appearance of the endodermis could never be used on its own to identify an unknown plant, but if it is simply a matter of choosing between several possible plants, then a close match on the endodermis would be quite sound evidence on which to base the identification.