NO has a significant effect on vascular smooth muscle tone and blood pressure.

NO has a significant effect on vascular smooth muscle tone and blood pressure. Numerous endothelium-dependent vasodilators, such as acetylcholine and bradykinin, act by increasing intracel-lular calcium levels in endothelial cells, leading to the synthesis of NO. NO diffuses to vascular smooth muscle leading to vasorelax-ation (Figure 19–2). Mice with a knockout mutation in the eNOS gene display increased vascular tone and elevated mean arterial pressure, indicating that eNOS is a fundamental regulator of blood pressure. 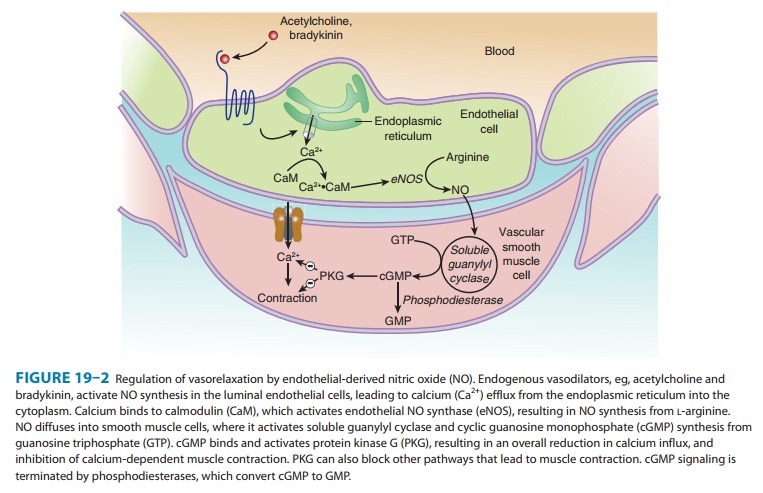 Apart from being a vasodilator and regulating blood pressure, NO also has antithrombotic effects. Both endothelial cells and platelets contain eNOS, which acts via an NO-cGMP pathway to inhibit platelet activation, an initiator of thrombus formation. Thus, in diseases associated with endothelial dysfunction, the associated decrease in NO generation leads to an increased pro-pensity for abnormal platelet function and thrombosis. NO may have an additional inhibitory effect on blood coagulation by enhancing fibrinolysis via an effect on plasminogen.

NO also protects against atherogenesis. A major antiathero-genic mechanism of NO involves the inhibition of proliferation and migration of vascular smooth muscle cells. In animal models, myointimal proliferation following angioplasty can be blocked by NO donors, by NOS gene transfer, and by NO inhalation. NO reduces endothelial adhesion of monocytes and leukocytes, which are early steps in the development of atheromatous plaques. This effect is due to the inhibitory effect of NO on the expression of adhesion molecules on the endothelial surface. In addition, NO may act as an antioxidant, blocking the oxidation of low-density lipoproteins and thus preventing or reducing the formation of foam cells in the vascular wall. Plaque formation is also affected by NO-dependent reduction in endothelial cell permeability to lipo-proteins. The importance of eNOS in cardiovascular disease is supported by experiments showing increased atherosclerosis in animals treated with eNOS inhibitors. Atherosclerosis risk factors, such as smoking, hyperlipidemia, diabetes, and hypertension, are associated with decreased endothelial NO production, and thus enhance atherogenesis.