NO, written as NO• to indicate an unpaired electron in its chemical structure, or simply NO, is a highly reactive signaling molecule that is made by any of three closely related NO synthase (NOS, EC 1.14.13.49) isoenzymes, each of which is encoded by a separate gene and named for the initial cell type from which it was isolated.

NO, written as NO• to indicate an unpaired electron in its chemical structure, or simply NO, is a highly reactive signaling molecule that is made by any of three closely related NO synthase (NOS, EC 1.14.13.49) isoenzymes, each of which is encoded by a separate gene and named for the initial cell type from which it was isolated (Table 19–1). These enzymes, neuronal NOS (nNOS or NOS-1), macrophage or inducible NOS (iNOS or NOS-2), and endothelial NOS (eNOS or NOS-3), despite their names, are each expressed in a wide variety of cell types, often with an over-lapping distribution. These isoforms generate NO from the amino acid L-arginine in an O2- and NADPH-dependent reaction (Figure 19–1). This enzymatic reaction involves enzyme-bound cofactors, including heme, tetrahydrobiopterin, and flavin adenine dinucleotide (FAD). In the case of nNOS and eNOS, NO synthe-sis is triggered by agents and processes that increase cytosolic cal-cium concentrations. Cytosolic calcium forms complexes with calmodulin, an abundant calcium-binding protein, which then binds and activates eNOS and nNOS. On the other hand, iNOS is not regulated by calcium, but is constitutively active. In mac-rophages and several other cell types, inflammatory mediators induce the transcriptional activation of the iNOS gene, resulting in accumulation of iNOS and increased synthesis of NO.

NO  mediates  its  effects  by  covalent  modification  of  proteins.There are three major targets of NO (Figure 19–1):

NO binds to the heme in sGC, resulting in enzyme activation and elevation in intracellular cGMP levels. cGMP activates protein kinase G (PKG), which phosphorylates specific proteins. In blood vessels, NO-dependent elevations in cGMP and PKG activity result in the phosphorylation of proteins that lead to reduced cytosolic calcium levels and subsequently reduced contraction of vascular smooth muscle. Interaction of NO with other metallo-proteins mediates some of the cytotoxic effects of NO associated with NO overproduction, eg, by activated macrophages. For example, NO inhibits metalloproteins involved in cellular respira-tion, such as the citric acid cycle enzyme aconitase and the electron transport chain protein cytochrome oxidase. Inhibition of heme-containing cytochrome P450 enzymes by NO is a major patho-genic mechanism in inflammatory liver disease. 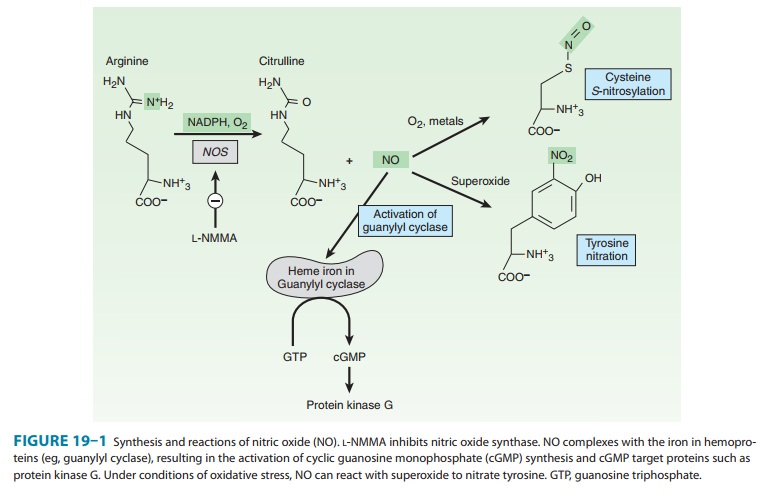 2. Thiols—NO reacts with thiols (compounds containing the–SH group) to form nitrosothiols. In proteins, the thiol moiety is found in the amino acid cysteine. This posttranslational modification, termed S-nitrosylation or S-nitrosation, requires either met-als or O2 to catalyze the formation of the nitrosothiol adduct. S-nitrosylation is highly specific, with only certain cysteine resi-dues in proteins becoming S-nitrosylated. S-nitrosylation can alter the function, stability, or localization of target proteins.

Although the physiologic roles of protein nitrosylation are not fully established, major targets of S-nitrosylation are H-ras, a regulator of cell proliferation that is activated by S-nitrosylation, and the metabolic enzyme glyceraldehyde-3-phosphate dehydrogenase, which is inhibited when it is S-nitrosylated. Denitrosylation of proteins is poorly understood but may involve enzymes, such as thioredoxin, or chemical reduction by intracellular reducing agents such as glutathione, an abundant intracellular sulfhydryl-containing compound. Glutathione can also be S-nitrosylated under physiologic conditions to generate S-nitrosoglutathione. S-nitrosoglutathione may serve as an endogenous stabilized formof NO or as a carrier of NO. Vascular glutathione is decreased in diabetes mellitus and atherosclerosis, and the resulting deficiency of S-nitrosoglutathione may account for the increased incidence of cardiovascular complications in these conditions.

3. Tyrosine nitration—NO undergoes both oxidative andreductive reactions, resulting in a variety of oxides of nitrogen that can nitrosylate thiols and nitrate tyrosines (described below) or arestable oxidation products (Table 19–2). NO reacts very efficiently with superoxide to form peroxynitrite (ONOO–), a highly reactive oxidant that leads to DNA damage, nitration of tyrosine, andoxidation of cysteine to disulfides or to various sulfur oxides (SOx). Several cellular enzymes synthesize superoxide, and the activity of these enzymes, as well as NO synthesis, is increased in numerous inflammatory and degenerative diseases, resulting in an increase in peroxynitrite levels. Numerous proteins are susceptible to peroxynitrite-catalyzed tyrosine nitration, and this irreversible modification can be associated with either activation or inhibition of protein function. Detection of tyrosine nitration in tissue is often used as a marker of oxidative stress and tissue damage, although a direct causal role of tyrosine nitration in the pathogen-esis of any disease has not been definitively established. Peroxynitrite-mediated protein modification is mitigated by intra-cellular levels of glutathione, which can protect against tissuedamage by scavenging peroxynitrite. Factors that regulate the biosynthesis and decomposition of glutathione may have impor-tant consequences on the toxicity of NO.

NO is highly labile due to its rapid reaction with metals, O2, and reactive oxygen species. NO can react with heme and hemopro-teins, including oxyhemoglobin, which oxidizes NO to nitrate. The reaction of NO with hemoglobin may also lead to S-nitrosylation of hemoglobin, resulting in transport of NOthroughout the vasculature. NO is also inactivated by reaction with O2 to form nitrogen dioxide. NO reacts with superoxide, which results in the formation of the highly reactive oxidizing spe-cies, peroxynitrite. Scavengers of superoxide anion such as super-oxide dismutase may protect NO, enhancing its potency and prolonging its duration of action.