Libraries are the usual mechanism for structuring applications as they become larger. There are some good technical reasons to use libraries:

Libraries are the usual mechanism for structuring applications as they become larger. There are some good technical reasons to use libraries:

n   Common functionality can be extracted into a library that can be shared between different projects or applications. This can lead to better code reuse, more efficient

use of developer time, and more effective use of memory and disk space.

n   Placing functionality into libraries can lead to more convenient upgrades where only the library is upgraded instead of replacing all the executables that use the library.

n   Libraries can be used as a mechanism to dynamically provide enhanced functional-ity. The functionality can be made available without having to change or even restart the application.

n   Libraries can enable functionality to be selected based on the runtime environ-ment or characteristics of the system. For instance, an application may load differ-ent optimized libraries depending on the underlying hardware or select libraries at runtime depending on the type of work it is being asked to perform.

On the other hand, there are some nontechnical reasons why functionality gets placed into libraries. These reasons may represent the wrong choice for the user.

n   Libraries often represent a convenient product for an organizational unit. One group of developers might be responsible for a particular library of code, but that does not automatically imply that a single library represents the best way for that code to be delivered to the end users.

n   Libraries are also used to group related functionality. For example, an application might contain a library of string-handling functions. Such a library might be appropriate if it contains a large body of code. On the other hand, if it contains only a few small routines, it might be more appropriate to combine it with another library.

There is a strong attraction to breaking applications down into a set of libraries. Libraries make sense for all the reasons outlined previously, but it is quite possible to have either inappropriate splits of functionality or libraries that implement too little functionality.

n   Library calls may be implemented using a table of function addresses. This table may be a list of addresses for the routines included in a library. A library routine

calls into this table, which then jumps to the actual code for the routine.

n   Each library and its data are typically placed onto new TLB entries. Calls into a library will usually also result in an ITLB miss and possibly a DTLB miss if the code accesses library-specific data.

n   If the library is being lazy loaded (that is, loaded into memory on demand), there will be costs associated with disk access and setting up the addresses of the library functions in memory.

n   Unix platforms typically provide libraries as position-independent code. This enables the same library to be shared in memory between multiple running appli-cations. The cost of this is an increase in code length. Windows makes the opposite trade-off; it uses position-dependent code in libraries, reducing the opportunity of sharing libraries between running applications but producing slightly faster code.

Listing 2.9 shows code for two trivial libraries that can be used to examine how memory is laid out at runtime.

Listing 2.10 shows the process of compiling these two libraries on Solaris.

The main program shown in Listing 2.11 will call the code in liba.so and then pause so we can examine the memory layout of the application.

The compile command in Listing 2.11 builds the main executable. The flag -L tells the linker where to find the library at link time. The flag -R tells the runtime linker where to locate the file at runtime. In the example, these two flags are set to the current directory. The application will link and execute only if the current directory does con-tain the library. However, other approaches are more resilient. Running this application enables us to look at the memory map using the utility pmap. Listing 2.12 shows the memory map.

Listing 2.12   Memory Map of Application and Libraries on Solaris 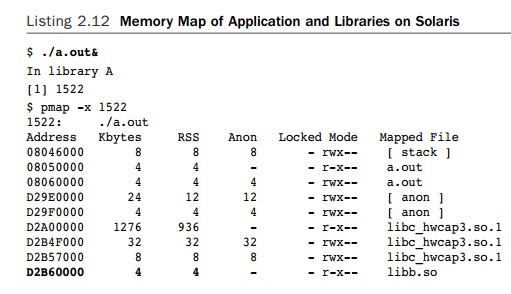 In the memory map shown in Listing 2.12, each library has at least two mapped seg-ments. The first is mapped with read and execute permissions that contain the code in the library. The second contains data and is mapped with read, write, and execute per-missions. Both libraries are mapped in, even though the code does not contain any calls to libb.so and makes no use of the library. The RSS column indicates that the library has been loaded into memory. The x86 processor uses a 4KB default page size, so pages of memory are allocated in 4KB chunks. Although both liba.so and libb.so contain only a few bytes of code, both libraries are allocated 4KB of memory for instructions. The same is true for data. The concern is that each 4KB will require a single TLB entry for a virtual address to physical address mapping when a routine in that page is called. If liba.so and libb.so had been combined, the functions in the two libraries could have been placed into a single 4KB segment for each of the instructions and data.

It is possible to look at the sequence of events when the application is loaded by set-ting the environment variable LD_DEBUG=flags. Listing 2.13 shows an edited form of the output.

This shows the sequence of starting the application, having the runtime linker exam-ine the application, and identifying the need for the libraries liba.so, libb.so, and libc.so.1. Once those libraries are loaded, it examines them for other libraries that might be needed.

The linker performs a sizable amount of work. However, the time spent processing the libraries is likely to be dominated by the time spent fetching them from disk. The more data and instructions a library contains, the more time it will take to read the library from disk. It is possible to use lazy loading to avoid loading libraries from disk until they are actually used. Listing 2.14 shows the application built with lazy loading enabled and the resulting runtime linking.

In this instance, the application runs without loading either liba.so or libb.so up until the point where the symbol ina() is required from the library liba.so. At that point, the runtime linker loads and processes the library. The lazy loading of libraries has meant that the application did not need to load libb.so at all, thus reducing application start-up time.

One more thing to consider for the costs for libraries is the cost of calling code resid-ing in libraries. The easiest way to demonstrate this is to modify the example code so it calls the routine ina() twice and then to use the debugger to examine what happens at runtime. The first call will load the library into memory, but that will happen only once and can be ignored. The second time the routine is called will be representative of all calls to all library routines. Listing 2.15 shows the output from the Solaris Studio debug-ger, dbx, showing execution up until the first call to the routine ina().

Listing 2.15  Execution Until the First Call to the Routine ina

--will trigger on first instruction

Listing 2.16   Jumping Through the PLT to the Routine ina

By the second time the call to ina() is encountered, the library has already been loaded, and the call is again into the PLT. Using the debugger to step into the call, we can see that this time the target is a jump instruction to the start of the routine.

The same procedure can be followed on Linux. Listing 2.17 shows the steps necessary to compile the application on Linux.

Listing 2.18 shows the steps to use the Linux debugger, gdb, to step through the process of calling the library function ina(). 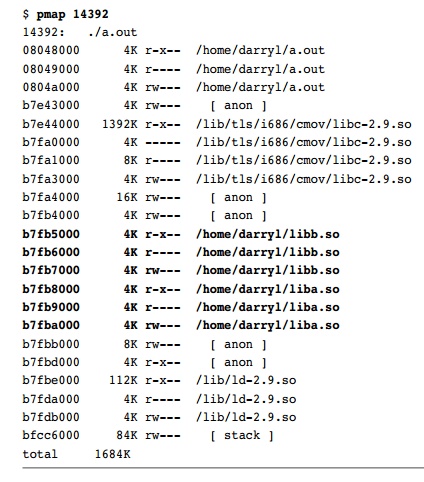 n   Libraries make sense when they contain code that is rarely executed. If a substan-tial amount of code does not need to be loaded from disk for the general use of the application, then the load time of the application can be reduced if this func-tionality is placed in a library that is loaded only when needed.

n   Device drivers are usually packaged as libraries. There is a temptation to produce multiple libraries, some of which are core and some of which are device specific. If there is likely to only ever be a single device of a specific type attached to a sys-tem, then it is better to provide a single library. If there are likely to be multiple types of devices attached that all share the common core, then it might be appro-priate to split the code into device-specific and common code.

The application shown in Listing 2.21 uses the library from Listing 2.20.

Listing 2.22 shows the results of compiling, linking, and running this application on Solaris without lazy loading.

Listing 2.23 shows the same test but with the library being lazy loaded.

There is one situation where libraries that are tagged as being lazy loaded are loaded anyway. If an application needs to find a symbol and the application was not explicitly linked with the library containing that object at compile time, then the application will load all the dependent libraries in order to resolve any unresolved symbols, undoing the usefulness of lazy loading. Suppose we add a second library that prints the message “Library B initializing” when it is loaded but contains no other code. Listing 2.24 shows the command line to compile this library to have a lazy-loaded dependence on liba.

Listing 2.24   Compiling libb to Have a Lazy-Loaded Dependence on liba

The next step, shown in Listing 2.25, is to deliberately link the application so that it lazy loads libb but does not have a dependence on liba. This would usually cause the linker to fail with an unresolved symbol error, but we can switch that safety check off using the -znodefs flag.

Listing 2.25   Compiling the Application to Only Recode the Dependence on libb

The resulting application contains an unresolved symbol for ina() but has a lazy-loaded dependence on libb. When the application is run, it will be unable to resolve the symbol ina(), so the runtime linker will start loading all the lazy-loaded libraries. Once it has loaded libb, it will then lazy load the dependencies of libb, where it will finally load liba and locate the routine ina(). Listing 2.26 shows the resulting output.

Listing 2.26  Output Showing libb Being Lazy Loaded as Part of Search for doStuff()

The other reason that lazy loading would be unsuccessful is if the code is not opti-mally distributed between the libraries. If each library requires code from another in order to work, then there is no way that a subset can be loaded without pulling them all into the application. Therefore, the distribution of code between the libraries is a critical factor in managing the start-up time of an application.