The Impact of Data Structures on Performance

The Impact of Data Structures on Performance

Data structure is probably what most people think of first when they hear the word structure within the context of applications. Data structure is arguably the most critical structure in the program since each data structure will potentially be accessed millions of times during the run of an application. Even a slight gain in performance here can be magnified by the number of accesses and become significant.

When an application needs an item of data, it fetches it from memory and installs it in cache. The idea with caches is that data that is frequently accessed will become resi-dent in the cache. The cost of fetching data from the cache is substantially lower than the cost of fetching it from memory. Hence, the application will spend less time waiting for frequently accessed data to be retrieved from memory. It is important to realize that each fetch of an item of data will also bring adjacent items into the caches. So, placing data that is likely to be used at nearly the same time in close proximity will mean that when one of the items of data is fetched, the related data is also fetched.

The amount of data loaded into each level of cache by a load instruction depends on the size of the cache line. As discussed in “Using Caches to Hold Recently Used Data” in Chapter 1, 64 bytes is a typical length for a cache line; however, some caches have longer lines than this, and some caches have shorter lines. Often the caches that are closer to the processor have shorter lines, and the lines further from the processor have longer lines. Figure 2.2 illustrates what happens when a line is fetched into cache from memory. 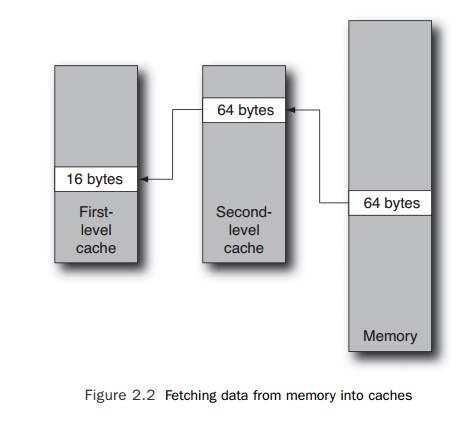 If data is fetched from memory when it is needed, the processor will experience the entire latency of the memory operation. On a modern processor, the time taken to per-form this fetch can be several hundred cycles. However, there are techniques that reduce this latency:

n    Hardware prefetching of data streams is where part of the processor is dedicated to detecting streams of data being read from memory. When a stream of data is iden-tified, the hardware starts fetching the data before it is requested by the processor. If the hardware prefetch is successful, the data might have become resident in the cache before it was actually needed. Hardware prefetching can be very effective in situations where data is fetched as a stream or through a strided access pattern. It is not able to prefetch data where the access pattern is less apparent.

Another approach to covering memory latency costs is with CMT processors. When one thread stalls because of a cache miss, the other running threads get to use the processor resources of the stalled thread. This approach, unlike those discussed earlier, does not improve the execution speed of a single thread. This can enable the processor to achieve more work by sustaining more active threads, improving throughput rather than single-threaded performance.

There are a number of common coding styles that can often result in suboptimal lay-out of data in memory. The following subsections describe each of these.

Paying attention to the order in which variables are declared and laid out in memory can improve performance. As discussed earlier, when a load brings a variable in from memory, it also fetches the rest of the cache line in which the variable resides. Placing variables that are commonly accessed together into a structure so that they reside on the same cache line will lead to performance gains. Consider the structure shown in Listing 2.27.

When the structure member var1 is accessed, the fetch will also bring in the sur-rounding 64 bytes. The size of an integer variable is 4 bytes, so the total size of var1 plus padding1 is 64 bytes. This ensures that the variable var2 is located on the next cache line. Listing 2.28 shows the structure reordered so that var1 and var2 are adjacent. This will usually ensure that both are fetched at the same time.

Listing 2.28 Reordered Data Structure So That Important Structure Members Are Likely to Share a Cache Line

The answer will depend on various factors. In most cases, the best answer is probably to pack the structures as tightly as possible. This will mean that when one structure is accessed, the access will also fetch parts of the surrounding structures. The situation 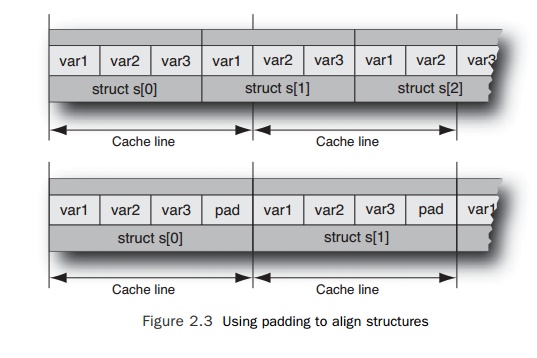 where it is appropriate to add padding to the structure is when the structures are always accessed randomly, so it is more important to ensure that the critical data is not split across a cache line.

A similar optimization is structure splitting, where an existing structure is split into members that are accessed frequently and members that are accessed infrequently. If the infrequently accessed structure members are removed and placed into another structure, then each fetch of data from memory will result in more of the critical structures being fetched in one action. Taking the previous example, where we assume that var3 is rarely needed, we would end up with a resulting pair of structures, as shown in Figure 2.4. 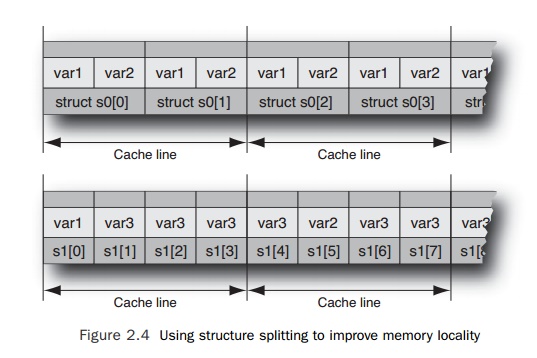 One common data access pattern is striding through elements of an array. The perform-ance of the application would be better if the array could be arranged so that the selected elements were contiguous. Listing 2.29 shows an example of code accessing an array with a stride.

C/C++ arrays are laid out in memory so that the adjacent elements of the final index (in this case indexed by the variable i) are adjacent in memory; this is called row-major order. However, the inner loop within the loop nest is striding over the first index into the matrix and accessing the ith element of that array. These elements will not be located in contiguous memory. 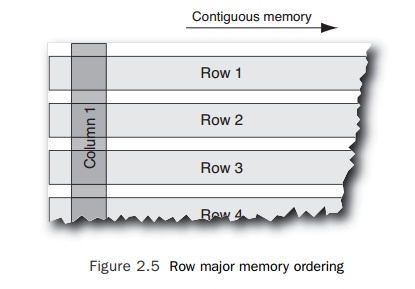 Fortunately, most compilers are often able to correctly interchange the loops and improve the memory access patterns. However, there are many situations where the compiler is unable to make the necessary transformations because of aliasing or the order in which the elements are accessed in the loop. In these cases, it is necessary for the developer to determine the appropriate layout and then restructure the code appropriately.

Choosing the best structure to hold data, such as choosing an algorithm of the appropri-ate complexity, can have a major impact on overall performance. This harks back to the discussions of algorithmic complexity earlier in this chapter. Some structures will be effi-cient when data is accessed in one pattern, while other structures will be more efficient if the access pattern is changed.

Consider a simple example. Suppose you have a dictionary of words for a spell-checker application. You don’t know at compile time how many words will be in the dictionary, so the easiest way to cope with this might be to read in the words and place them onto a linked list, as shown in Figure 2.6. 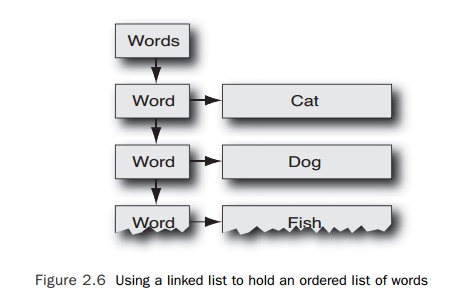 Every time the application needs to check whether a word is in the dictionary, it traverses the linked list of words, so a spell-check of the entire document is an O(N2) activity.

An alternative implementation might be to allocate an array of known length to hold pointers to the various words, as shown in Figure 2.7.

Although there might be some complications in getting the array to be the right length to hold all the elements, the benefit comes from being able to do a binary search on the sorted list of words held in the array. A binary search is an O(log2(N)) activity, so performing a spell-check on an entire document would be an O(N∗log2(N)) activity, which, as indicated earlier, would be a significantly faster approach.

As in any example, there are undoubtedly better structures to choose for holding a dictionary of words. Choosing the appropriate one for a particular application is a case of balancing the following factors:

n   Programmer time to implement the algorithm. There will probably be constraints on the amount of time that a developer can spend on implementing a single part of the application.

n   User sensitivity to application performance. Some features are rarely used, so a user might accept that, for example, performing a spell-check on an entire document will take time. It may also be the case that the compute part of the task is not time critical; in the case of a spell-check, if a spelling error is reported, the user may spend time reading the text to determine the appropriate word to use, during which the application could continue and complete the spell-check of the rest of the document.

n   The problem size is not large enough to justify the more complex algorithm. If the application is limited to documents of only a few hundred words, it is unlikely that a spell-check of the entire document would ever take more than about half a second. Any performance gains from the use of an improved algorithm would be unnoticeable.

In many situations, there are preexisting libraries of code that implement different data management structures. For C++, the Standard Template Library provides a wealth of data structures. Careful coding to encapsulate the use of the data structures can mini-mize developer time by allowing the original structures to be easily replaced with more efficient ones should that prove necessary.