Most modern profiling tools do not require you to do anything special to the application.

The first approach is system-wide profiling. This is the approach taken by tools such as Intel’s VTune, AMD’s CodeAnalyst, and the open source profiling tool oprofile. The entire system is inspected, and timing information is gathered for all the processes run-ning on the system. This is a very useful approach when there are a number of coordi-nating applications running on the system. During the analysis of the data, it is normal to focus on a single application.

Figure 2.9 shows the output from the AMD CodeAnalyst listing all the active processes on the system. 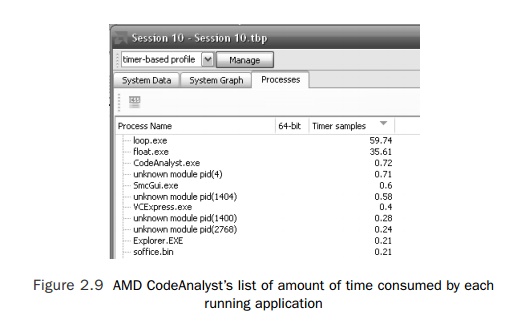 In this instance, there are two applications using up almost all of the CPU resources between them.

The second common approach is to profile just the application of interest. This approach is exemplified by the Solaris Studio Performance Analyzer. Profiling a single application enables the user to focus entirely on that application and not be distracted by the other activity on the system.

Profile data at the function level can be useful for confirming that time is being spent in the expected routines. However, more detail is usually necessary in order to improve the application. Figure 2.11 shows time attributed to lines of source in the AMD CodeAnalyzer. 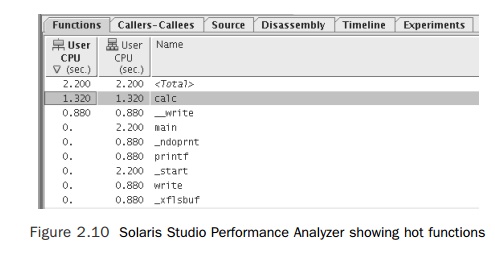 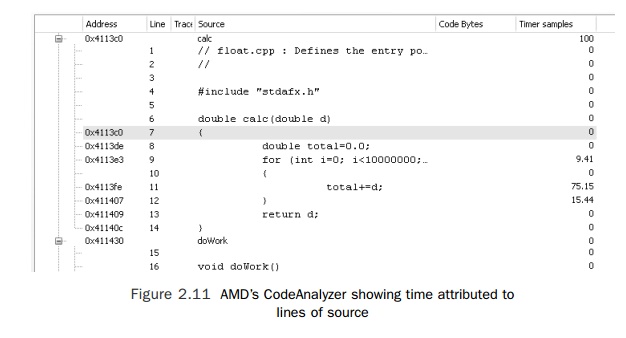 Using the source-level profile, most developers can make decisions about how to restructure their code to improve performance. It can also be reassuring to drop down into assembly code level to examine the quality of the code produced by the compiler and to identify the particular operations that are taking up the time. At the assembly code level, it is possible to identify problems such as pointer aliasing producing subopti-mal code, memory operations taking excessive amounts of time, or other instructions that are contributing significant time. Figure 2.12 shows the disassembly view from the AMD CodeAnalyst. 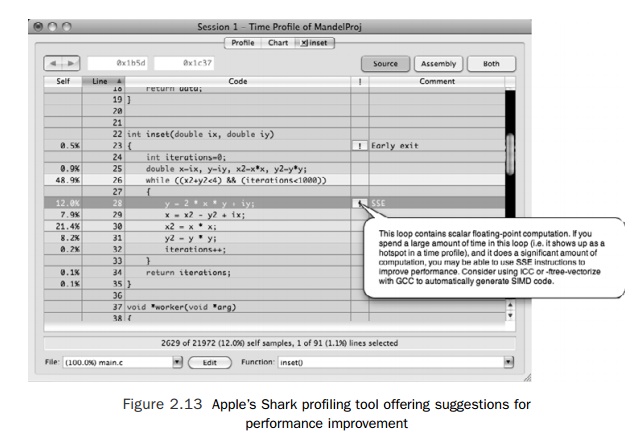 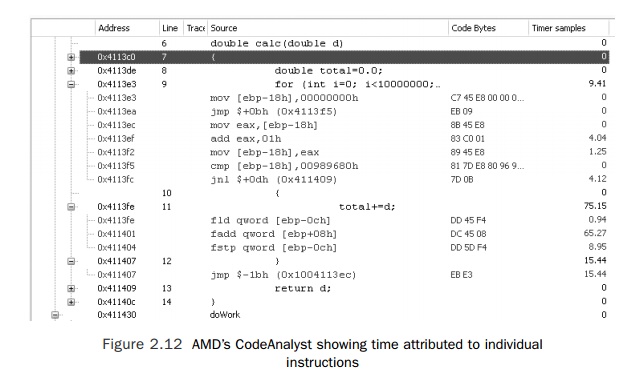 Some tools are able to provide suggestions on how to improve the performance of the application. Figure 2.13 shows output from Apple’s Shark tool, which suggests improving performance by recompiling the application to use SSE instructions.

Many performance problems can be analyzed and solved at the level of lines of source code. However, in some instances, the problem is related to how the routine is used. In this situation, it becomes important to see the call stack for a routine. Figure 2.14 shows a call chart from Intel’s Vtune tool. The figure shows two threads in the application and indicates the caller-callee relationship between the functions called by the two threads.

An alternative way of presenting caller-callee data is from the Oracle Solaris Studio Performance Analyzer, as shown in Figure 2.15. This hierarchical view allows the user to drill down into the hottest regions of code.

Another view of the data that can be particularly useful is the time line view. This shows program activity over time. Figure 2.16 shows the time live view from the Solaris Studio Performance Analyzer. In this case, the time line view shows both thread activity, which corresponds to the shaded region of the horizontal bars, together with call stack information, indicated by the different colors used to shade the bars. Examining the run of an application over time can highlight issues when the behavior of an application changes during the run. An example of this might be an application that develops a great demand for memory at some point in its execution and consequently spends a period of its runtime exclusively in memory allocation code. 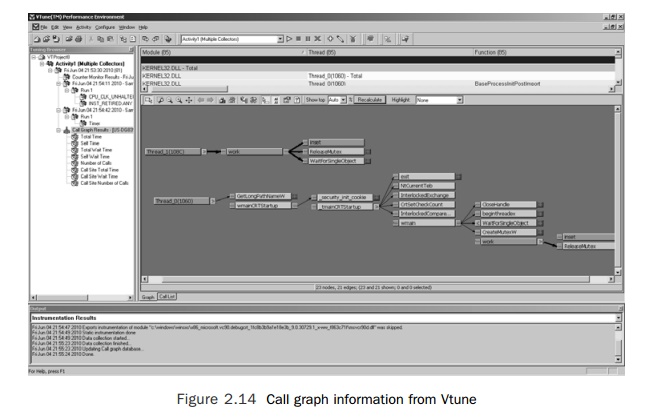 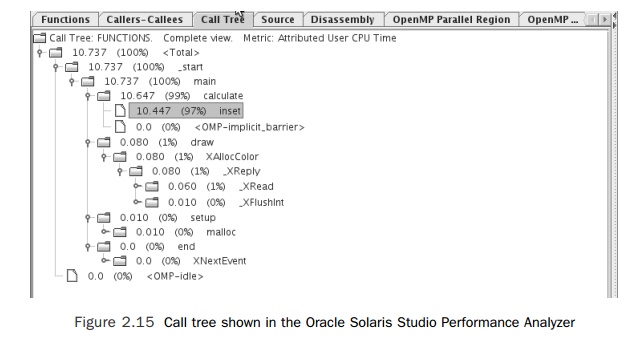 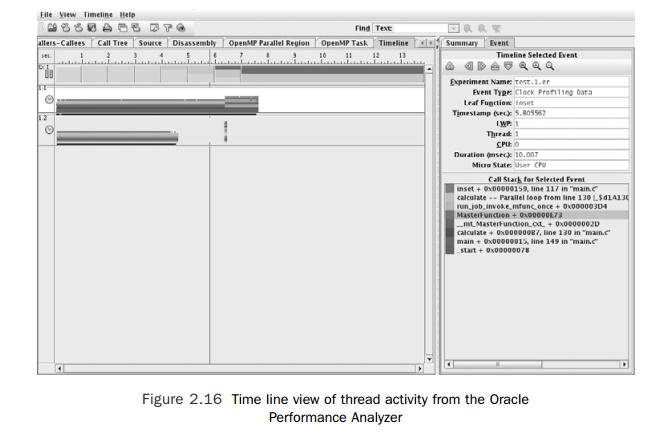 A similar view is available from Apple’s Instruments tool, as shown in Figure 2.17. An instrument is the name given to a tool that gathers data about processor, disk, network, and memory usage over the run of an application. This particular example shows proces-sor utilization by the two threads over the run of the application. The time line view is particularly useful for multithreaded applications. To get the best performance, the work needs to be evenly divided between all threads. The time line view is a quick way of telling whether some threads are more active than others. It can also be useful for codes where a synchronization event, such as garbage collection in the case of Java, causes most of the threads in an application to pause.

Performance analysis tools are critical in producing optimal serial and parallel codes. Consequently, it is important to become familiar with the tools available on your system. For serial codes, a performance analysis tool will identify the region of code that needs to be improved to increase the performance of an application. For parallel codes, they will allow you to identify regions of code where the parallelization could be improved or where the work could be better distributed across the available processors or threads.