The ability of certain drugs to increase both fluid and electrolyte loss has led to their use in the clinical man-agement of fluid and electrolyte disorders, for example, edema. Regardless of the cause of the syndrome associ-ated with edema, the common factor is almost invariably an increased retention of NA+ . The aim of diuretic ther-apy is to enhance NA+ excretion, thereby promoting negative NA+ balance.This net NA+ (and fluid) loss leads to contraction of the overexpanded extracellular fluid compartment.

Diuretics may have considerable value in reducing the edema associated with congestive heart failure; how-ever, each patient must be evaluated individually, since diuresis is not considered mandatory in all patients. Digitalis and salt restriction may be sufficient to de-crease the associated symptoms of pulmonary conges-tion and peripheral edema. In patients who require a di-uretic as adjunctive therapy, the usual choice should be a thiazide or thiazide-type diuretic rather than one of the loop diuretics (e.g., bumetanide or furosemide). This is true especially in mild congestive heart failure. The more efficacious compounds probably should be re-served for those who fail to respond to one of the thi-azides. A K+ -sparing diuretic also can be given with the thiazide to maintain serum K+ levels, which might oth-erwise be depleted. Hypokalemia predisposes patients to digitalis intoxication.

The use of diuretic drugs, either alone or in combination with other agents, in the management of mild to mod-erate hypertension is frequent. Diuresis and restriction of salt intake are often sufficient for all hypertensive pa-tients except those with severe, malignant, or compli-cated hypertension. The mechanisms by which the di-uretics lower arterial pressure are not precisely known, although it is thought that the initial response is due to a reduction of plasma volume with a consequently di-minished cardiac output. However, after a few weeks, the initial degree of extracellular volume reduction is not maintained, probably owing to a gradual increase in aldosterone production (i.e., increased NA+ retention and K+ loss). Nonetheless, the antihypertensive effect is sustained.

Although the arterial pressure in hypertensive pa-tients is related to intravascular volume, the changes in plasma volume are primarily caused by alterations in to-tal body NA+ . Strict dietary NA+ restriction can lower arte-rial pressure in hypertensive patients, whereas a large NA+ intake will reverse the hypotensive effects of thiazide di-uretics. It appears quite plausible that all of the hypoten-sive effects of the diuretics can be attributed to some as-pect of NA+ depletion, that is, either directly on extracellular fluid volume or perhaps indirectly through the effects of NA+ loss on autonomic nervous function (e.g., diminished norepinephrine storage capacity in sym-pathetic nerves) or vascular smooth muscle reactivity.

Diuretics are frequently used in combination with other antihypertensive agents. The appropriateness of this combination becomes even more apparent when it is realized that nondiuretic antihypertensives (e.g., hy-dralazine or diazoxide) produce some increase in plasma volume that if not corrected, would lead to an eventual decrease in their activity .

Cirrhosis and other liver diseases may result in the for-mation of excessive amounts of fluid in the abdomen (ascites). The primary causes of ascites are usually ele-vation of pressure in the portal vein and a decreased amount of hepatic plasma protein production. Both fac-tors tend to reduce the ability of the vascular compart-ment to retain fluid. The resultant ascites may con-tribute to decreased appetite and respiratory difficulties, among other symptoms. When these symp-toms are present, careful reduction in the fluid volume through the use of diuretics is desirable.

Since patients with cirrhosis vary widely in their re-sponse to diuretics, conservative initial diuretic therapy is called for. The mainstay of treatment, however, remains restriction of dietary NA+ . A common finding in patients with cirrhosis is decreased glomerular filtration, despite the increase in total blood volume caused by the exten-sive pooling of blood in the splanchnic vessels. Diminished renal perfusion leads to increased aldos-terone secretion, which in turn increases NA+ retention and K+ loss. Thus, in addition to diuretics, most patients require K+ supplementation. The thiazides remain the drugs of first choice. The use of a high-ceiling drug, such as furosemide, leads more frequently to such complica-tions as hypokalemia, hyponatremia, and azotemia. K+ - sparing diuretics may be useful adjunctive (but not sole) agents if extensive hypokalemia is present.

The usual cause of pulmonary edema is acute left ven-tricular failure. The sequelae of events after left heart failure roughly follow the pattern of reduced stroke vol-ume, leading to increased end-systolic and diastolic vol-ume, which elevates left ventricular end-diastolic pres-sure. Pressure then increases in the left atrium, pul-monary vein, and finally in the pulmonary capillaries. Elevated pressure in the pulmonary capillaries results in the passing of more fluid into the pulmonary intersti-tial space, and this compromises gas exchange, dimin-ishes total lung gas volume, and increases airway resist-ance. With acute pulmonary edema of cardiac origin, the traditional treatment has included administration of the efficacious, rapidly acting loop diuretics. These agents, given parenterally, can reduce total blood volume rap-idly and thus may help to prevent recurrence of pul-monary congestion. The value of immediate and vigor-ous use of the loop diuretics has been questioned. The problems of excessive fluid and K+ loss indicate a con-servative approach to diuresis even in this medical emergency.

A rise in intracranial pressure results in the appearance of a number of symptoms, including headache, vomit-ing, edema of the optic discs, changes in vital signs, and possibly death. Dehydrating measures, including the use of diuretics, can help lower the pressure, particularly if the elevated intracranial pressure is of a nontraumatic origin. The parenteral administration of a hypertonic so-lution of one of the osmotic diuretics, urea or mannitol, can relieve the pressure through its osmotic effects. The oral administration of glycerol also has been used in neurosurgical procedures when increases in intracranial pressure are anticipated.

Nephrotic syndrome is characterized by proteinuria and edema due to some form of glomerulonephritis. The re-sulting fall in plasma protein concentration decreases vascular volume, which leads to diminished renal blood flow. This in turn causes secondary aldosteronism char-acterized by NA+ and water retention and K+ depletion. Rigid control of dietary NA+ is essential. Therapy of the nephrotic syndrome using a thiazide (possibly with a K+ - sparing diuretic) to control the secondary aldosteronism, is a useful initial approach to treatment. Since nephrotic edema is frequently more difficult to control than car-diac edema, it may be necessary to switch to a loop di-uretic (and spironolactone) to obtain adequate diuresis.

The loop diuretics are usually required in treating chronic renal failure, since drugs with lesser intrinsic ac-tivity are not sufficiently effective when tubular function has been compromised greatly. Larger than normal amounts of furosemide are frequently employed, and thus it is especially important to monitor the patient for excessive volume depletion. Intermittent therapy may be the best approach.

The principal rationale for the use of diuretics in acute renal failure is to prevent complete renal shutdown. Whether renal failure is caused by some underlying dis-ease or by drug-induced renal toxicity, the continued production of even a small amount of urine is probably important in reducing further kidney tubular damage. Most commonly employed are the osmotic diuretics, with intravenous mannitol generally being the agent of choice. Osmotic diuresis is possible only if glomerular damage, tubular damage, or both have not progressed too far.

Premenstrual Edema and Edema of Pregnancy

Many women retain fluid during pregnancy and during the last days of the menstrual cycle. Breast fullness and subcutaneous swelling or puffiness are the most com-monly observed symptoms; they are largely the result of elevated circulating hormone levels in the blood. Estrogens possess some mineralocorticoid activity, and thus, when present in relatively high concentrations, may produce some expansion of the extracellular fluid compartment. Excessive premenstrual edema fre-quently responds well to thiazide therapy. Recent expe-rience has diminished enthusiasm for use of any diuret-ics in pregnant women. Since the edema of pregnancy is frequently well tolerated, concerns of compromised uteroplacental perfusion, possible ineffectiveness of di-uretics in preeclampsia, and the risk of adverse effects of diuretics on the baby (e.g., thiazides can both cross the placental barrier and appear in breast milk, produc-ing electrolyte disturbances and thrombocytopenia in newborns) have led to diminished routine use of these agents in pregnancy.

Since the effectiveness of many diuretics ultimately de-pends on establishing a negative NA+ balance to mobi-lize edema fluid, restriction of dietary NA+ intake is gen-erally an essential part of diuretic therapy. Therefore, one cause of therapeutic failure or apparent patient refrac-toriness to diuretics could be the patient’s continued in-gestion of large quantities of NaC1.

Some of the older diuretic drugs were self-limiting; that is, prolonged administration resulted in a gradual diminution of their effectiveness. This problem was cor-rected through the use of intermittent diuretic therapy. Such a program of several days of diuresis followed by several days of drug withdrawal delayed refractoriness to the drug by preventing excessive disturbances in body electrolyte composition.

Many diuretics (e.g., thiazides and loop diuretics) must reach the tubular lumen before they begin to be ef-fective. Because these compounds are organic acids and are bound to plasma proteins, they reach the lu-minal fluid by secretion. Any disease condition or drug that impairs secretion will affect the access of the di-uretics to the luminal fluid and hence to their ultimate site of action (e.g., distal tubule or ascending loop). For example, renal dysfunction may lead to a buildup of endogenous organic acids that decrease drug secretion and thereby alter the patient’s expected response to the diuretic. Patients with azotemia frequently require large doses of organic acid diuretics to achieve a satis-factory response. The concomitant administration of other drugs that are substrates for the organic acid se-cretory system (e.g., probenecid or penicillin) may re-sult in an apparent resistance to diuretic action. It should now be obvious that in addition to disease and electrolyte imbalances, the pharmacodynamic handling of the diuretics themselves may be a factor in diuretic resistance.

Although most individuals respond well to the usual doses of loop diuretics, a small number of pa-tients are refractory to these drugs. These patients may be vulnerable to ototoxicity or other adverse effects if larger amounts of the diuretic are employed. Compensatory proximal tubular sodium absorption may contribute to or be responsible for the resistance to loop diuretics. Combinations of diuretics may be used as an alternative approach to treating diuretic re-sistance once it has been verified that satisfactory NA+ restriction is being followed and that the drug is being adequately absorbed. Administration of a carbonic an-hydrase inhibitor may be sufficient to enhance NA+ de-livery to thick ascending limbs, where its reabsorption can be blocked by loop diuretics. Alternatively, thiazide diuretics may be combined with the loop diuretic to limit absorption by distal convoluted tubules. The thi-azidelike diuretic metolazone, which has some proxi-mal tubule effects unrelated to carbonic anhydrase, ap-pears to be the most effective of the thiazide and thiazidelike drugs in this regard.

Excessively vigorous diuresis may lead to intravascular dehydration before removal of edema fluid from the rest of the extracellular compartment. This is especially dangerous if the patient has significant liver or kidney disease. Once the initial correction of fluid and elec-trolyte derangement has been achieved, the effect sought is maintenance of homeostasis, not dehydration. Drug dosage, frequency of administration, and NA+ intake should be adjusted to achieve homeostasis.

If diuresis has been too vigorous, as may occur after injudicious use of loop diuretics, or if extensive fluid and electrolyte loss has occurred following severe diarrhea or vomiting, replacement therapy may be required. A number of available solutions resemble extracellular fluid and are useful for the repair of water and elec-trolyte deficits (Table 21-5). 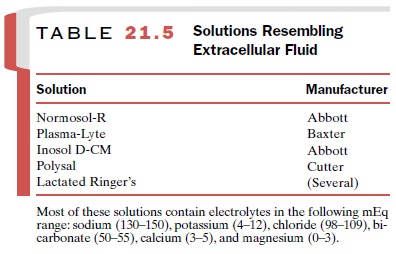 Since the 1950s, diuretic therapy has changed dra-matically. Earlier, the major diuretics were acid-forming salts, xanthines, organomercurial compounds, and carbonic anhydrase inhibitors. Either because of toxicity or lack of efficacy, these agents are rarely if ever used.