Thiazide diuretics consist of two distinct groups: those containing a benzothiadiazine ring, such as hydro-chlorothiazide and chlorothiazide, referred to as thiazide diuretics, and those that lack this heterocyclic structure but contain an unsubstituted sulfonamide group.

Despite the structural distinctions, the drugs share the functional attribute of increasing sodium and chlo-ride excretion by inhibiting NA+ –Cl- cotransport in dis-tal convoluted tubules. 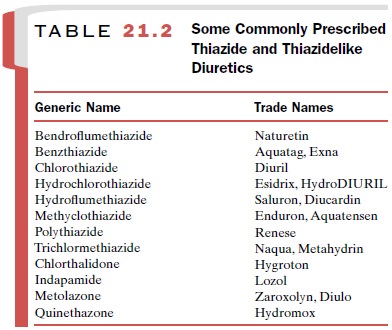 The thiazidelike compounds, including chlorthali-done (Hygroton), quinethazone (Hydromox), and metolazone (Zaroxolyn) have similar mechanisms of action, but they differ substantially from one another in their duration of action, the degree of carbonic anhy-drase inhibition, and the dose required for maximum natriuretic activity. 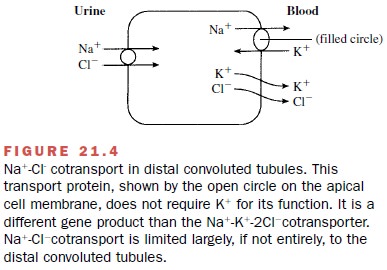 Especially at higher doses, administration of some of the thiazides results in some degree of carbonic anhy-drase inhibition. However, at usual doses, only chloroth-iazide shows any appreciable carbonic anhydrase in-hibitory activity.

When administered at maximal doses, chlorothiazide markedly increases excretion of NA+ , K+ , Cl- , and HCO3- . Maximal diuresis may approach values as high as 10% of the filtered load, although fractional NA+ ex-cretions of 5% are more common. At usual clinical doses, however, the thiazide diuretics generally increase excretion of NA+ and Cl- , with an accompanying loss of K+ . Thus, unlike that of the carbonic anhydrase in-hibitors, the diuresis produced by thiazide and thiazide-like diuretics is of NaCl and not NaHCO3-. The urinary K+ wasting induced by the thiazides is primarily a con-sequence of the increased NA+ delivered to the distal tubule as discussed earlier.

Two renal responses are unique to the thiazide and thiazidelike diuretics. With these compounds, NA+ excre-tion is increased, while Ca++ excretion is decreased, pri-marily and directly because of increased distal Ca++ re-absorption, secondarily and indirectly because of a compensatory elevation of proximal solute absorption, making this class of diuretics useful in treating hypercal-ciuria. This effect, which may not be evident upon initial administration of the drug, is particularly beneficial in individuals who are prone to calcium stone formation.

A second unusual action of this class of diuretics is their utility in treating nephrogenic diabetes insipidus. Patients who have an adequate supply of ADH but whose kidneys fail to respond to ADH excrete large volumes of very dilute urine, not unlike those who have an ADH deficiency. The thiazides reduce glomerular fil-tration modestly and decrease positive free water for-mation (CH2O), that is, production of dilute urine. These actions combine to cause patients with nephrogenic di-abetes insipidus to excrete a somewhat reduced urine volume with increased osmolality.

Orally administered thiazides are rapidly absorbed from the gastrointestinal tract and begin to produce diuresis in about 1 hour. Approximately 50% of an oral dose is excreted in the urine within 6 hours. These compounds are organic acids and are actively secreted into the prox-imal tubular fluid by the organic acid secretory mecha-nism.There also appears to be an extrarenal pathway for their elimination involving the hepatic–biliary acid se-cretory system that is particularly important for thiazide elimination when renal function is impaired.

The thiazides have a variable effect on elimination of uric acid, which also is secreted by the renal acid se-cretory mechanism. Administration of thiazide diuret-ics, especially at low doses, may elevate serum uric acid levels and cause goutlike symptoms. Following large doses, thiazides may compete with uric acid for active reabsorption and thereby may promote uric acid elimi-nation rather than impair it .

Thiazides, especially hydrochlorothiazide (Dyazide, Esidrix, HydroDIURIL, Oretic), are useful adjunctive therapy in controlling the edema associated with con-gestive heart failure, cirrhosis, premenstrual tension, and hormone therapy. They are widely used in the treat-ment of hypertension whether or not it is accompanied by edema .They can be used in patients with renal disease; however, their diuretic activity is proportional to the residual tubular functional capacity of the kidney. The thiazides do not prevent toxemia in pregnancy, nor are they useful in the treatment of it.

Thiazides should be used cautiously in the presence of severe renal and hepatic disease, since azotemia and coma may result. The most important toxic effect associ-ated with this class of diuretics is hypokalemia, which may result in muscular and central nervous system symptoms, as well as cardiac sensitization (see Hypokalemia). Periodic examination of serum elec-trolytes for possible imbalances is strongly recom-mended. Appropriate dietary and therapeutic measures for controlling hypokalemia are described later. The thiazides also possess some diabetogenic potential, and although pancreatitis during thiazide therapy has been reported in a few cases, the major mechanism contributing to the potential for glucose in-tolerance is not known.