Home | | Modern Pharmacology with Clinical Applications | Hypokalemia and Potassium-sparing Diuretics
Posted On :  26.12.2017 11:39 am

The chronic use of some diuretics may require the oral administration of potassium supplements or potassium-sparing diuretics that reduce urinary K+ excretion.

The chronic use of some diuretics may require the oral administration of potassium supplements or potassium-sparing diuretics that reduce urinary K+ excretion. This is true especially for patients with congestive heart fail-ure and cirrhosis, who are particularly sensitive to K+ loss. The presence or absence of clinical symptoms of hypokalemia is quite closely related to serum K+ con-centrations, and even small changes in extracellular K+ can have marked effects. Most patients begin to show symptoms when serum K+ levels fall below 2.5 mEq/L (from a normal value of approximately 5 mEq/L).

Hypokalemia can be treated by supplying additional K+ through the diet, drug treatment, or both. Replacement should be gradual, with frequent evalua-tion of both serum K+ concentrations and cardiac activ-ity (electrocardiographic monitoring). K+ supplements can be administered in several forms. KCl is generally preferred over other forms such as bicarbonate, citrate, or gluconate, since most patients exhibit concurrent metabolic alkalosis. KCl corrects both the hypokalemia and the alkalosis. When hypokalemia is not attended by metabolic alkalosis, other forms of K+ supplementation may be preferred. Since KCl solutions have a rather bit-ter and unpleasant taste, this salt was formerly given as an enteric-coated tablet. However, the rapid release of KCl from the tablet after it entered the small intestine was responsible for a severe local ulceration, hemor-rhage, and stenosis, especially when there was a delay in gut transit time; therefore, the enteric-coated tablets have been withdrawn.

Sugar-coated products have been marketed that contain KCl in a wax matrix (Slow-K+ and Kaon-Cl) and are purportedly slow- and controlled-release prepara-tions. Available evidence indicates that these slow-release forms of KCl are occasionally capable of causing local tissue damage and therefore probably should be used with caution for K+ supplementation. Solutions of potassium gluconate, like the tablets, also have been as-sociated with intestinal ulceration. Microencapsulated KCl preparations (Micro-K, K-Dur) that are neither en-teric coated nor contained within a wax matrix appear to be superior to the wax matrix formulation.

Consumption of potassium-rich foods is the easiest and most generally advised means of counteracting a K+ deficit. Table 21.3 lists foods that are suitable for K+ supplementation. 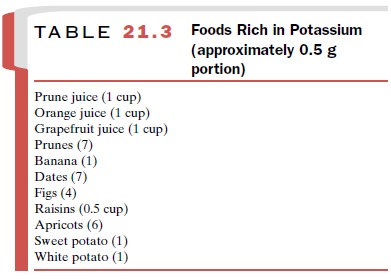 In general, a normal diet plus about 40 mEq per day of K+ is adequate to prevent hypokalemia. If K+ -rich foods prove inadequate in replacing large quantities of the electrolyte or if the increased caloric intake that is part of the dietary supplementation is not desirable, oral liquid therapy is the formulation of choice. A listing of these solutions is given in Table 21.4. Although pa-tients may find many of these products unpalatable, their further dilution with water or fruit juice can be helpful. Finally, the addition of a K+ -sparing diuretic to the therapeutic regimen may prove useful. 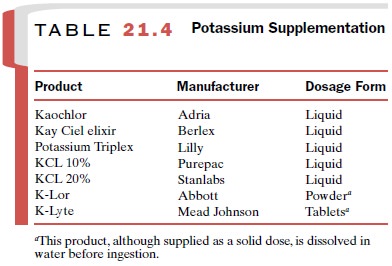 The three principal potassium-sparing diuretic agents produce similar effects on urinary electrolyte composition. Through actions in the distal convoluted tubule and collecting duct, they cause mild natriuresis and a decrease in K+ and H+ excretion. Despite their similarities, these agents actually constitute two groups with respect to their mechanisms of action.

The mechanism by which NA+ is reabsorbed in coupled exchange with H+ and K+ in the collecting duct has been discussed previously; that is, NA+ -driven K+ secre-tion is partially under mineralocorticoid control. Aldosterone and other compounds with mineralocorti-coid activity bind to a specific mineralocorticoid recep-tor in the cytoplasm of late distal tubule cells and of principal cells of the collecting ducts. This hormone– receptor complex is transported to the cell nucleus, where it induces synthesis of multiple proteins that are collectively called aldosterone-induced proteins. The precise mechanisms by which these proteins enhance NA+ transport are incompletely understood. However, the net effect is to increase NA+ entry across apical cell membranes and to increase basolateral membrane NA+ –K+ –ATPase activity and synthesis.

Spironolactone is poorly absorbed after oral adminis-tration and has a delayed onset of action; it may take sev-eral days until a peak effect is produced. It has a some-what slower onset of action than triamterene and amiloride (discussed later), but its natriuretic effect is modestly more pronounced, especially during long-term therapy. Spironolactone is rapidly and extensively metab-olized, largely to the active metabolite canrenone. Canrenone and potassium canrenoate, its K+ salt, are available for clinical use in some countries outside the United States. Canrenone has a half-life of approximately 10 to 35 hours. The metabolites of spironolactone are ex-creted in both the urine and feces. New selective aldos-terone receptor antagonists (SARA), such as eplerenone, have been developed but have not yet been introduced into clinical practice. Eplerenone and canrenone exhibit fewer steroidlike side effects (gynecomastia, hirsutism).

Spironolactone has been used clinically in the fol-lowing conditions:

·              Primary hyperaldosteronism. Used as an aid in preparing patients with adrenal cortical tumors for surgery.

·              Hypokalemia. Used in patients with low serum K+ resulting from diuretic therapy with other agents. Its use should be restricted to patients who are un-able to supplement their dietary K+ intake or ad-equately restrict their salt intake or who cannot tolerate orally available KCl preparations.

·              Hypertension and congestive heart failure. Although spironolactone may be useful in com-bination with thiazides, the latter remain the drugs of first choice. Fixed-dose combinations of spironolactone and a particular thiazide (e.g., Aldactazide) generally offer no therapeutic ad-vantage over either component given separately and tend to restrict the ability of the clinician to determine the optimal dosage of each drug for a particular patient.

·              Cirrhosis and nephrotic syndrome. Spironolactone is a mild diuretic and may be useful in treating the edema that occurs in these two clinical conditions, that is, when excessive K+ loss is to be avoided.

Serum electrolyte balance should be monitored peri-odically, since potentially fatal hyperkalemia may occur, especially in patients with impaired renal function or ex-cessive K+ intake (including the K+ salts of coadminis-tered drugs, e.g., potassium penicillin). Spironolactone can induce hyponatremia and in cirrhotic patients, meta-bolic acidosis. A variety of gastrointestinal disturbances may accompany spironolactone administration. These include diarrhea, gastritis, gastric bleeding, and peptic ul-cers. Spironolactone is contraindicated in patients with peptic ulcers. Spironolactone may also cause elevated blood urea nitrogen, drowsiness, lethargy, ataxia, confu-sion, and headache. Gynecomastia and menstrual irreg-ularity in males and females, respectively, can occur. Painful gynecomastia (directly related to dosage level and duration of therapy), which is generally reversible, may necessitate termination of therapy. Animal studies demonstrating tumorigenic potential support the clinical judgment that spironolactone alone or in combination should not be used for most patients who require di-uretic therapy and its unnecessary use should be avoided.

Triamterene (Dyrenium) or amiloride (Midamor) ad-ministration results in changes in urinary electrolyte patterns that are qualitatively similar to those produced by spironolactone. The mechanism by which these agents bring about the alterations in electrolyte loss, however, is quite different. Triamterene and amiloride produce their effects whether or not aldosterone or any other mineralocorticoid is present. The action of these two drugs is clearly unrelated to endogenous mineralo-corticoid activity, and these drugs are effective in adrena-lectomized patients.

Both agents appear to affect NA+ reabsorption in the cortical collecting duct. A site in the connecting tubule also may be involved. Although amiloride has been more extensively studied than triamterene, both diuretics specifically block the apical membrane epithe-lial NA+ channel (ENaC) (Fig. 21-5). The reduced rate of NA+ reabsorption diminishes the gradient that facili-tates K+ secretion. K+ secretion by the collecting duct principal cells is a passive phenomenon that depends on and is secondary to the active reabsorption of NA+ .

In addition to their effects on distal NA+ and K+ transport, all of the K+ -sparing diuretics inhibit urinary H+ secretion by the late distal tubule and cortical collect-ing duct. The mechanism of this inhibitory action is not totally clear.

Both triamterene and amiloride are effective after oral administration. Diuresis ensues within 2 to 4 hours after administration, although a maximum therapeutic effect may not be seen for several days. Both drugs cause a modest (2–3%) increase in NA+ and HCO3 -ex-cretion, a reduction in K+ and H+ loss, and a variable ef-fect on Cl- elimination. Approximately 80% of an ad-ministered dose of triamterene is excreted in the urine as metabolites; amiloride is excreted unchanged.

Triamterene can be used in the treatment of conges-tive heart failure, cirrhosis, and the edema caused by secondary hyperaldosteronism. It is frequently used in combination with other diuretics except spironolactone. Amiloride, but not triamterene, possesses antihyperten-sive effects that can add to those of the thiazides.

These K+ -sparing diuretics have low efficacy when used alone, since only a small amount of total NA+ re-absorption occurs at more distal sites of the nephron. These compounds are used primarily in combination with other diuretics, such as the thiazides and loop di-uretics, to prevent or correct hypokalemia. The avail-ability of fixed-dose mixtures of thiazides with nons-teroidal K+ -sparing compounds has proved a rational form of drug therapy. Both triamterene and amiloride are available alone or in combination with hy-drochlorothiazide.

Because the actions of triamterene and amiloride are independent of plasma aldosterone levels, their pro-longed administration is likely to result in hyper-kalemia. Both amiloride and triamterene are con-traindicated in patients with hyperkalemia. Triamterene should not be given to patients with impaired renal function. Potassium intake must be reduced, especially in outpatients. A folic acid deficiency has been reported to occur occasionally following the use of triamterene.