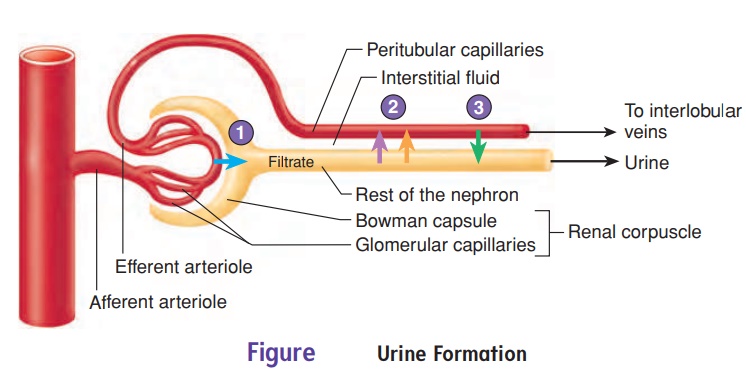 A. Identify the principal factors that influence filtration pressure, and explain how they affect the rate of filtrate production. B. Give the function of the proximal convoluted tubule, descending and ascending limbs of the loop of henle distal convoluted tubule, and collecting duct. C. Explain how the movement of substances across the wall of the nephron and collecting duct influences the composition of the filtrate.

The primary function of the kidney is regulation of body fluid com-position. The kidney is the organ that sorts the substances from the blood for either removal in the urine or return to the blood. Substances that are waste products, toxins, and excess materials are permanently removed from the body, whereas other substances need to be con-served to maintain homeostasis. The structural components that per-form this sorting are the nephrons, the functional units of the kidney. If you have ever decided to organize your “junk” drawer in your desk or kitchen, you may realize just how difficult it is to quickly sort through all its contents. In fact, you may have found yourself simply emptying the drawer onto a table and then sorting the contents one by one as you place objects into a “save” group or a “throw away” group. In a sense, the kidney uses the same approach when regulating blood composition. The “throw away” items end up in the urine, and the “save” items go back into the blood. Urine is mostly water and some organic waste products, as well as excess ions (table 18.1). 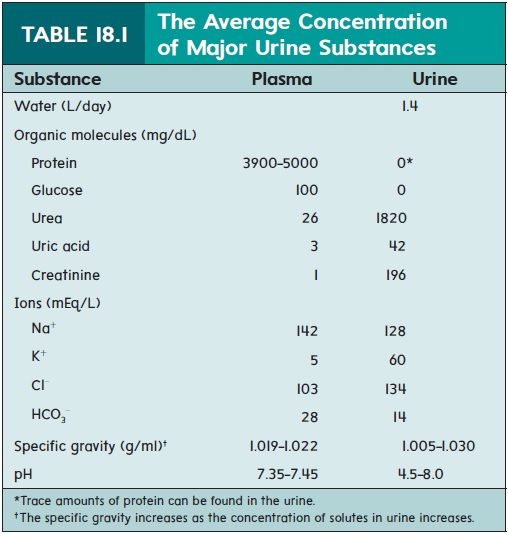 Filtration occurs when blood pressure nonselectively forceswater and other small molecules out of glomerular capillaries and into the Bowman capsule, forming a fluid called filtrate.

Tubular reabsorption is the movement of substances fromthe filtrate across the wall of the nephron back into the blood of the peritubular capillaries. Certain solute molecules and ions are reabsorbed by processes such as active transport and cotransport into the cells of the nephron wall and then from there into the interstitial fluid. Water reabsorption occurs by osmosis across the nephron wall. The molecules and ions that enter the interstitial fluid surrounding the nephron pass into the peritubular capillaries. In general, the useful substances that enter the filtrate are reab-sorbed, and metabolic waste products remain in the filtrate and are eliminated. For example, when proteins are metabolized, ammonia is a by-product. Ammonia, which is toxic to humans, is converted into urea by the liver. Urea forms part of the filtrate; although some of it is reabsorbed, much of it is eliminated in the urine.

The filtration membrane allows some substances, but not oth-ers, to pass from the blood into the Bowman capsule. Water and small solutes readily pass through the openings of the filtration membrane, but blood cells and most proteins, which are too large, do not enter the Bowman capsule. One example of a small blood protein that can enter the filtrate in very small amounts is albumin. Consequently, the filtrate contains no cells and little protein.

The blood pressure within the glomerular capillaries is fairly con-stant because the afferent and efferent arterioles either dilate or con-strict to regulate the blood pressure there, even though the systemic blood pressure may fluctuate substantially. Also, the concentration of blood proteins and the pressure inside the Bowman capsule are fairly constant. As a consequence, the filtration pressure and the rate of filtrate formation are maintained within a narrow range of values most of the time.

However, the filtration pressure does change dramatically under some conditions. Sympathetic neurons innervate the blood vessels of the kidney. Sympathetic stimulation constricts the arteries, causing a decrease in renal blood flow and filtrate formation in proportion to the intensity of the stimulation. It is possible to decrease filtrate forma-tion to only a few milliliters per minute. Consequently, only a small volume of urine is produced (see figure 18.17). For instance, during cardiovascular shock, the filtration pressure and filtrate formationfall dramatically. One of the dangers of cardiovascular shock is that the renal blood flow can be so low that the kidneys suffer from lack of O2. If the O2 level remains too low for a long enough time, permanent kidney damage or complete kidney failure results. One important reason for treating cardiovascular shock quickly is to avoid damage to the kidneys. Other conditions, such as intense physical activity or trauma, also increase sympathetic stimulation of renal arteries and decrease urine production to very low levels. On the other hand, increased blood pressure decreases sympathetic stimulation of renal blood arteries, and urine volume increases (see figure 18.17). 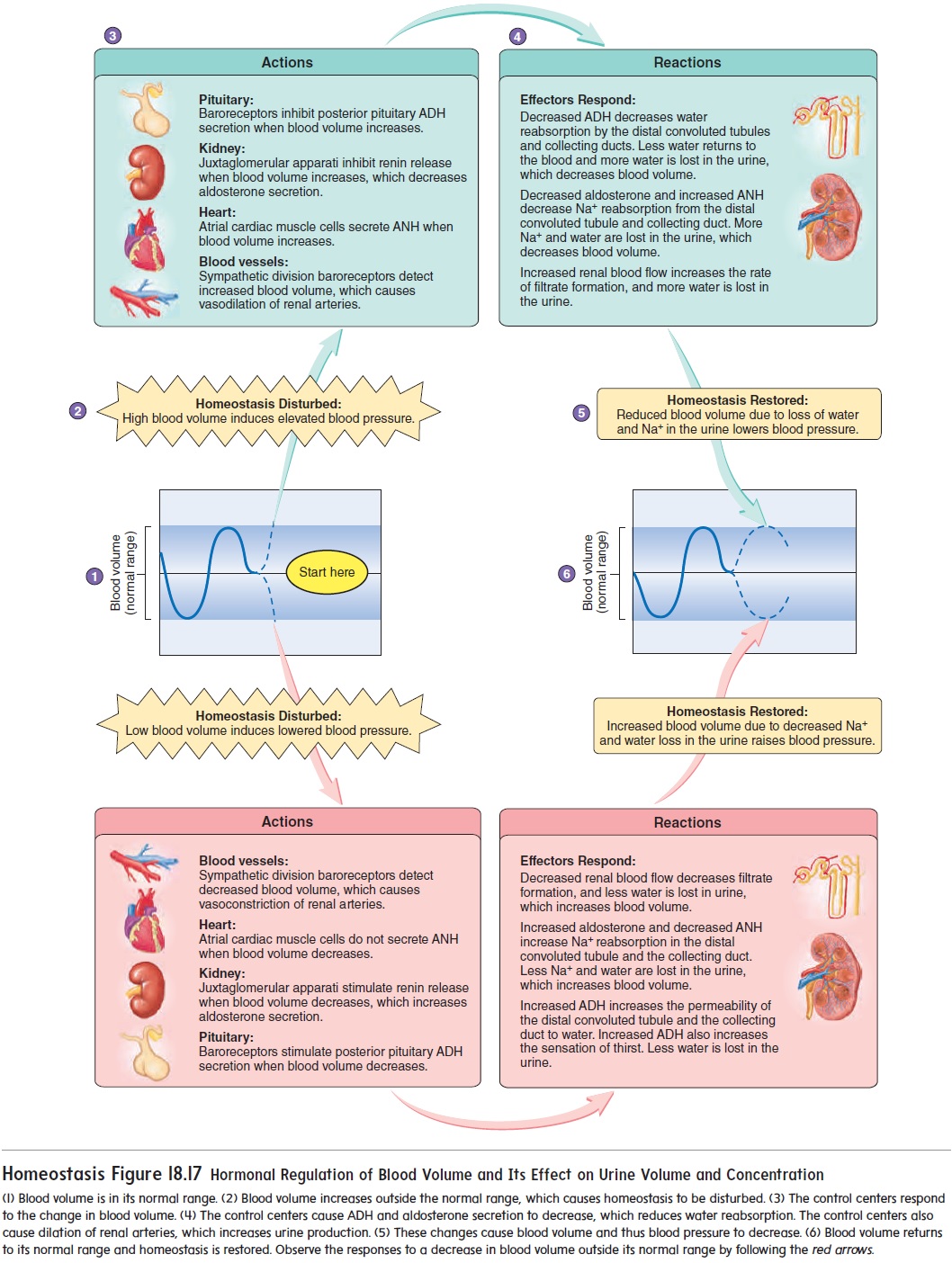 As the filtrate flows from the Bowman capsule through the proxi-mal convoluted tubule, loop of Henle, distal convoluted tubule, and collecting duct, many of the solutes in the filtrate are reabsorbed. About 99% of the original filtrate volume is reabsorbed and enters the peritubular capillaries. The reabsorbed filtrate flows through the renal veins to enter the general circulation. Only 1% of the orig-inal filtrate volume becomes urine (figure 18.9). Because excess ions and metabolic waste products are not readily reabsorbed, the small volume of urine produced contains a high concentration of ions and metabolic waste products. 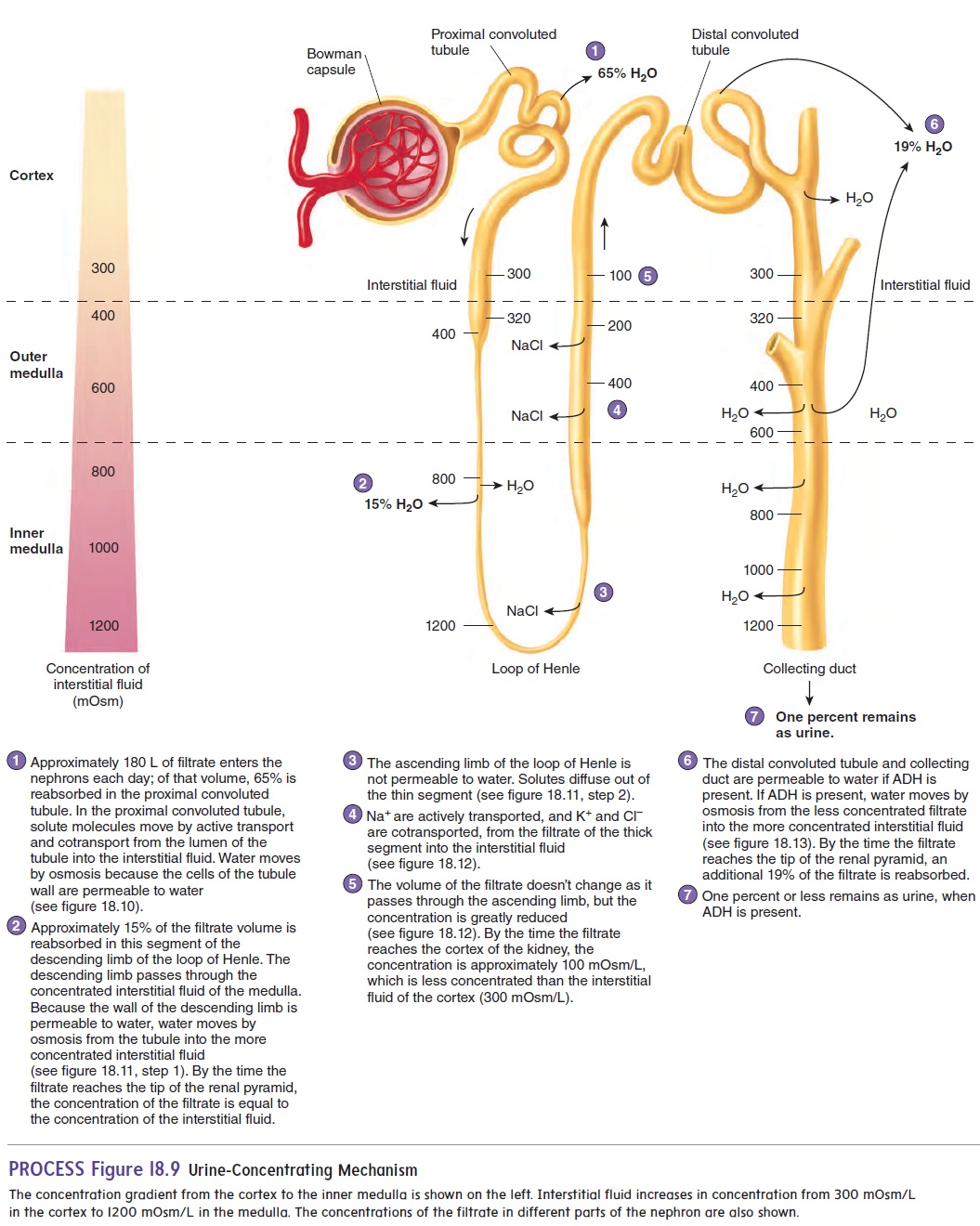 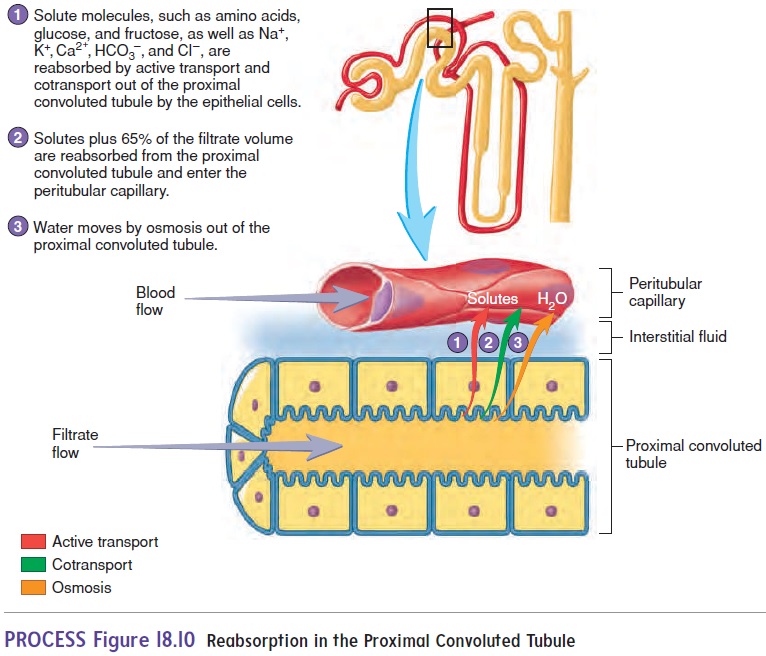 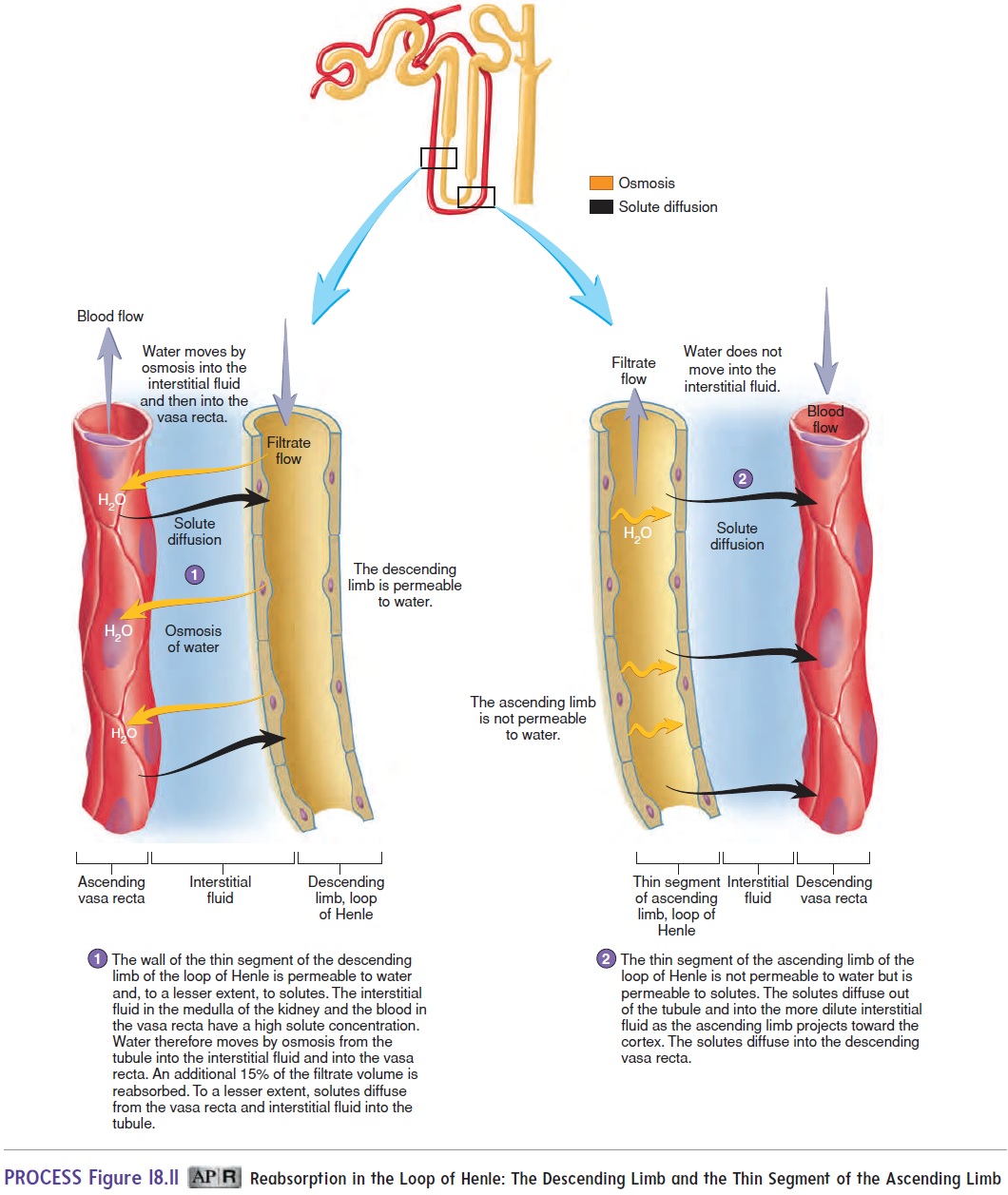 The cuboidal epithelial cells of the thick segment of the ascending limb actively transport Na+ out of the nephron, and K+ and Cl− are cotransported with Na+. The thick segment of the ascending limb is not permeable to water. As a result, Na+, K +, and Cl−, but little water, are removed from the filtrate (see figure 18.9, step 4). Because of the efficient removal of these solutes, the high-ly concentrated filtrate that enters the ascending limb of the loop of Henle is converted to a dilute solution by the time it reaches the distal convoluted tubule (figure 18.12; see figure 18.9, step 5). As the filtrate enters the distal convoluted tubule, it is more dilute than the interstitial fluid of the renal cortex. Also, because of the volume of filtrate reabsorbed in the proximal convoluted tubule and the descending limb of the loop of Henle, only about 20% of the original filtrate volume remains. The solutes transported from the ascending limb of the loop of Henle enter the interstitial fluid of the medulla and help keep the concentration of solutes in the medulla high. Excess solutes enter the vasa recta. 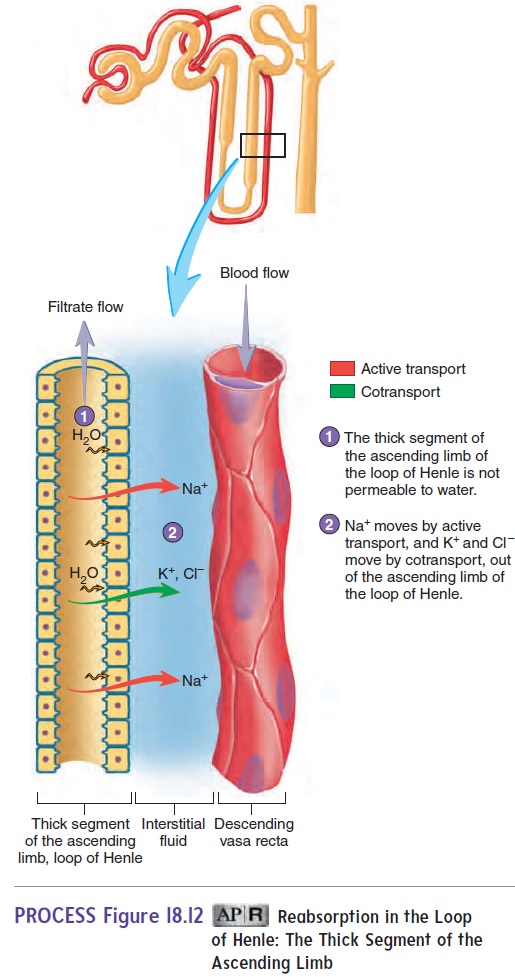 The cuboidal cells of the distal convoluted tubule and col-lecting duct remove water and additional solutes. Na+ and Cl− are reabsorbed. Sodium ions are actively transported, and chloride ions are cotransported. Also, 19% of the original filtrate volume is reabsorbed by osmosis, leaving about 1% of the original filtrate as urine (figure 18.13; see figure 18.9, steps 6 and 7). The reabsorbed water and solutes from the distal convoluted tubule enter the peri-tubular capillaries and the vasa recta from the collecting ducts.

The reabsorption of water and solutes from the distal convo-luted tubule and collecting duct is controlled by hormones, which have a great influence on urine concentration and volume (see “Regulation of Urine Concentration and Volume”).

Some substances, including by-products of metabolism that become toxic in high concentrations and drugs or other molecules not nor-mally produced by the body, are secreted into the nephron from the peritubular capillaries. As with tubular reabsorption, tubular secretion can be either active or passive. For example, ammonia diffuses into the lumen of the nephron, whereas H+, K+, creatinine, histamine, and penicillin are actively transported into the nephron.

Hydrogen ions are actively transported into the proximal con-voluted tubule. The epithelial cells actively transport large quanti-ties of H+ across the nephron wall into the filtrate. The secretion of H+ plays an important role in regulating the body fluid pH.