Illustrate how the mechanisms that regulate the body fluid pH function, by explaining how they respond to decreasing and increasing pH in the body fluids. 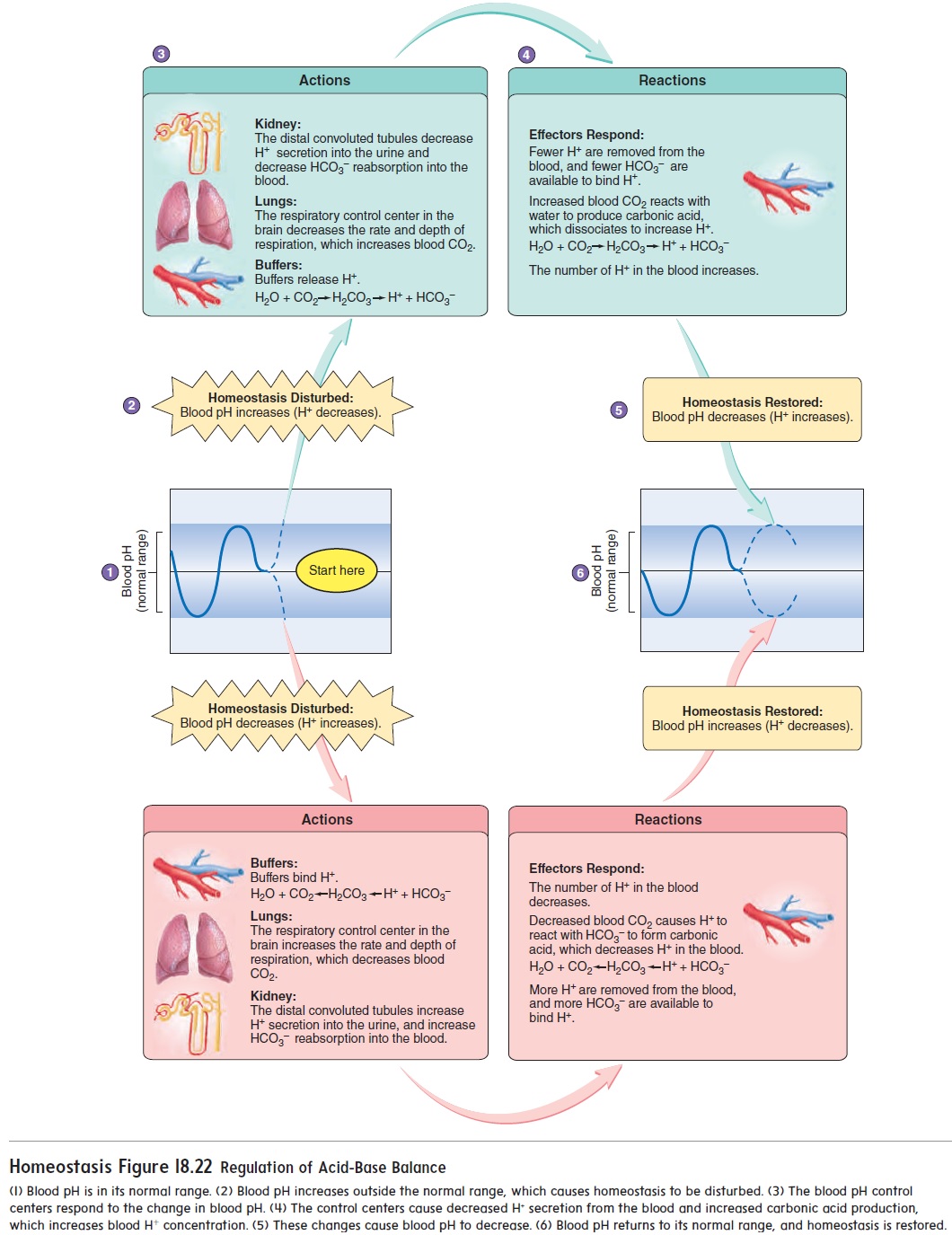 Buffers are chemicals that resist a change in the pH of a solutionwhen either acids or bases are added to the solution. The buffers in the body fluids contain salts of either weak acids or weak bases that combine with H+ when H+ increases in those fluids, or release H+ when H+ decreases in those fluids. Buffers tend to keep the H+ concentration, and thus the pH, within a narrow range of values (figure 18.22) because of these characteristics. The three major buffers in the body fluids are the proteins, the PO43− buffer system, and the HCO3− buffer system.

The bicarbonate (HCO3−) buffer system is unable to combine with as many hydrogen ions as can proteins and PO43− buffers, but the HCO3− buffer system is critical because it can be regulated by the respiratory and urinary systems. Carbon dioxide (CO2) combines with water (H2O) to form carbonic acid (H2CO3), which in turn forms H+ and HCO3− as follows:

The reaction between CO2 and H2O is catalyzed by an enzyme, called carbonic anhydrase, which is found in red blood cells and on the surface of capillary epithelial cells . The enzyme accelerates the rate at which the reaction proceeds in either direction.

The respiratory system responds rapidly to a change in pH and helps bring the pH of body fluids back toward normal. Increasing CO2 levels and decreasing body fluid pH stimulate neurons in the respiratory center of the brain and cause elevated rate and depth of ventilation. As a result, CO2 is eliminated from the body through the lungs at a greater rate, and the concentration of CO2 in the body fluids decreases. As CO2 levels decline, the concentration of H+ also declines. The pH therefore rises back toward its normal range (figure 18.22).

The nephrons of the kidneys secrete H+ into the urine and therefore can directly regulate the pH of the body fluids. The kidney is a powerful regulator of pH, but it responds more slowly than does the respiratory system. Cells in the walls of the distal convoluted tubule are primarily responsible for the secretion of H+. As the pH of the body fluids drops below normal, the rate at which the distal convo-luted tubules secrete H+ increases (figure 18.22). At the same time, reabsorption of HCO3− increases. The increased rate of H+ secretion and the increased rate of HCO3− reabsorption both cause the blood pH to rise toward its normal value. On the other hand, as the body fluid pH elevates above normal, the rate of H+ secretion by the distal con-voluted tubules declines, and the amount of HCO3− lost in the urine increases. Consequently, the blood pH drops toward its normal value.

Failure of the buffer systems, the respiratory system, or the uri-nary system to maintain normal pH levels can result in acidosis or alkalosis.

Acidosis (as-i-dō′ sis) occurs when the blood pH falls below 7.35.The central nervous system malfunctions, and the individual becomes disoriented and, as the condition worsens, may become comatose. Acidosis is separated into two categories. Respiratory acidosis results when the respiratory system is unable to eliminate adequate amounts of CO2. Carbon dioxide accumulates in the circulatory system, causing the pH of the body fluids to decline. Metabolicacidosis results from excess production of acidic substances, suchas lactic acid and ketone bodies, because of increased metabolism or decreased ability of the kidneys to eliminate H+ in the urine.

Alkalosis (al-kă-lō′ sis) occurs when the blood pH increases above7.45. A major effect of alkalosis is hyperexcitability of the nervous system. Peripheral nerves are affected first, resulting in spontane-ous nervous stimulation of muscles. Spasms and tetanic contrac-tions result, as can extreme nervousness or convulsions. Tetany of respiratory muscles can cause death. Respiratory alkalosis results from hyperventilation, as can occur in response to stress. Metabolicalkalosis usually results from the rapid elimination of H+from thebody, as occurs during severe ­vomiting or when excess aldosterone is secreted by the adrenal cortex.