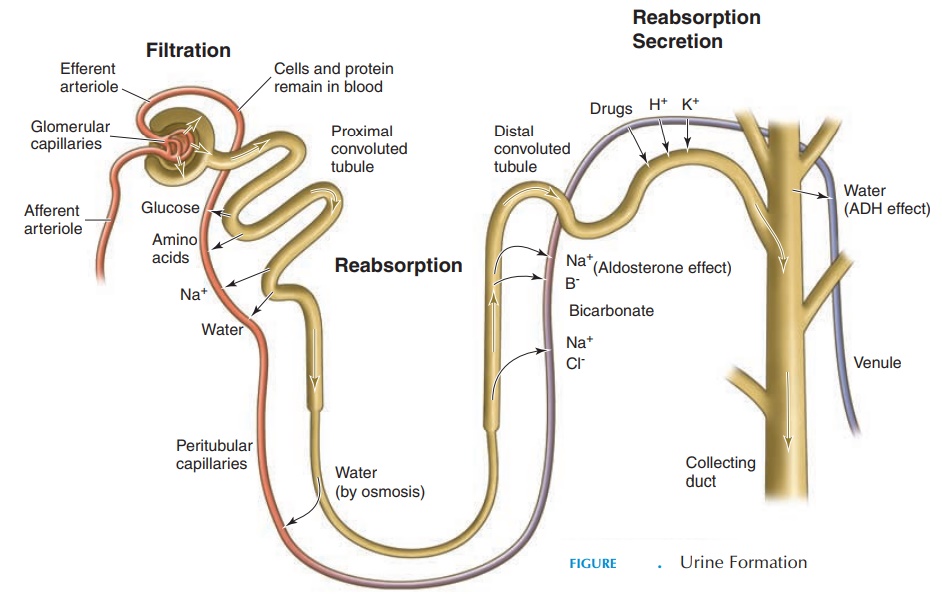 The filtrate originally formed in the renal corpuscle undergoes many changes as it travels down the renal tubule.

The filtrate originally formed in the renal corpuscle undergoes many changes as it travels down the renal tubule. These changes are made in different segments of the renal tubule, according to the internal envi-ronment (i.e., in accordance to the blood volume, blood pressure, plasma concentration, and level of such electrolytes as sodium, potassium, and calcium) The structure of the cells lining the different seg-ments of the tubule is modified according to the func-tions they perform (see Figure 12.8). 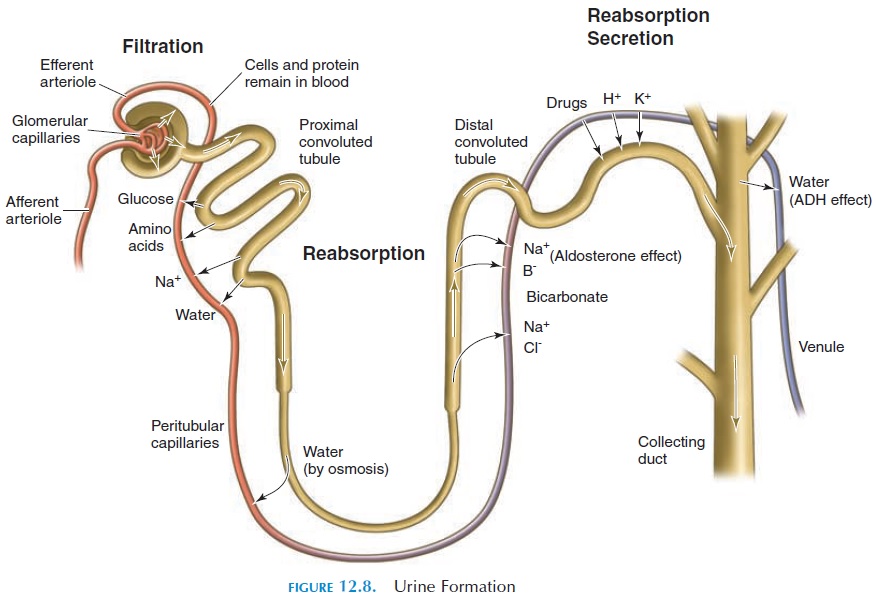 In the renal corpuscle, substances from the blood are allowed to pass passively through the filtration membrane, based on their size. Therefore, solutes, such as glucose, amino acids, and fatty acids, are also filtered. To increase efficiency and avoid waste, useful substances such as these must be reabsorbed. In ad-dition, the large volume of water filtered from the plasma cannot be wasted. To give an idea of the water volume involved, the rate at which the glomeruli filter the plasma—the glomerular filtration rate (GFR)— is 125 mL/minute (7.6 in3). This is about 180 liters (10,980 in3 or 47.6 gal) per day. Fortunately, 99% of this fluid is reabsorbed in the renal tubule and only about 1.5 liters (91.5 in3) of urine is excreted a day (see Table 12.1). 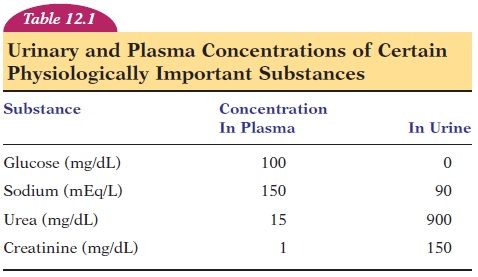 The cells of the renal tubule have the ability to re-absorb from the lumen as well as secrete into thetubule. They reabsorb all useful substances and se-crete the waste products that may have escaped fil-tration. The primary function of different segments of the nephrons is given in Table 12.2. 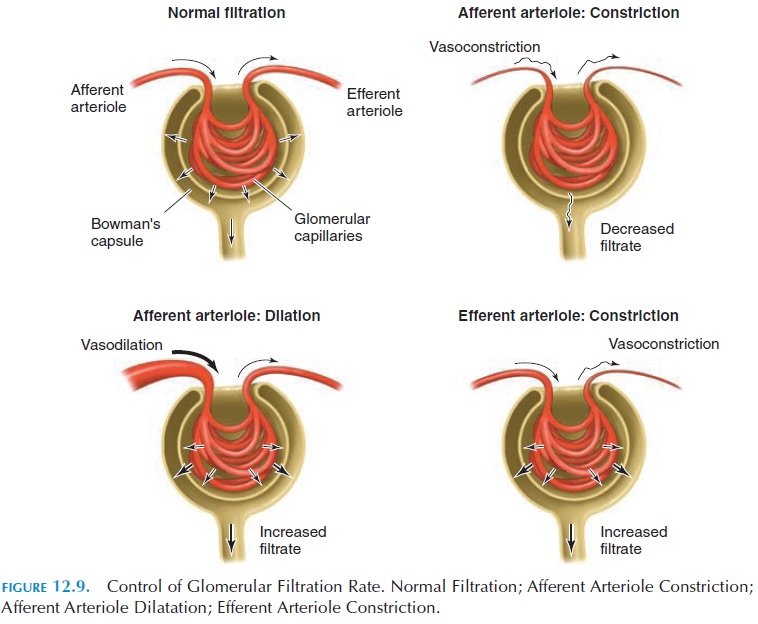 The rate of water and electrolyte absorption is modified by the action of hormones such as antidi-uretic hormone (ADH) and aldosterone. The auto-nomic nerves are also involved.

In summary, three physical processes—filtration,secretion, and absorption—are involved in urine for-mation. The process of concentrating urine and con-serving water depends on the differences in the per-meability of the cells lining the tubules from segment to segment.

REGULATION OF BODY FLUIDS— THE PROCESS OF CONCENTRATING AND DILUTING URINE

At the glomeruli, filtration occurs; the filtrate, which is similar to plasma other than the lack of plasma protein, travels down the renal tubule. In the proxi-mal convoluted tubule, most ions and organic sub-stances are actively or passively reabsorbed. Some reabsorbed solutes include sodium, potassium, cal-cium, chloride, phosphate, and bicarbonate. Small proteins and peptides are reabsorbed by pinocytosis. A few substances, such as hydrogen ions, urea, am-monia, and creatinine, may be secreted. Water is re-absorbed by osmosis.

This drastically reduces the volume of the filtrate. As the fluid descends further into the descending limb, more water is reabsorbed and the tubular fluid becomes concentrated. Water and other reabsorbed substances are transported across the lining cells to the surrounding fluid, where they are absorbed into the blood capillaries that surround the tubules.

The cells in the ascending limb of the loop of Henle are not permeable to water or solutes. The sodium and chloride absorbed here must be actively transported. This process dilutes the tubular fluid (i.e., by removing the solutes alone from the tubular fluid). At the same time, the movement of ions into the interstitial fluid results in concentrating the in-terstitial fluid surrounding the tubule. As a result, the concentration of interstitial fluid surrounding the loop of Henle progressively increases from the cortex to the deeper parts of the medulla (see Figure 12.10). 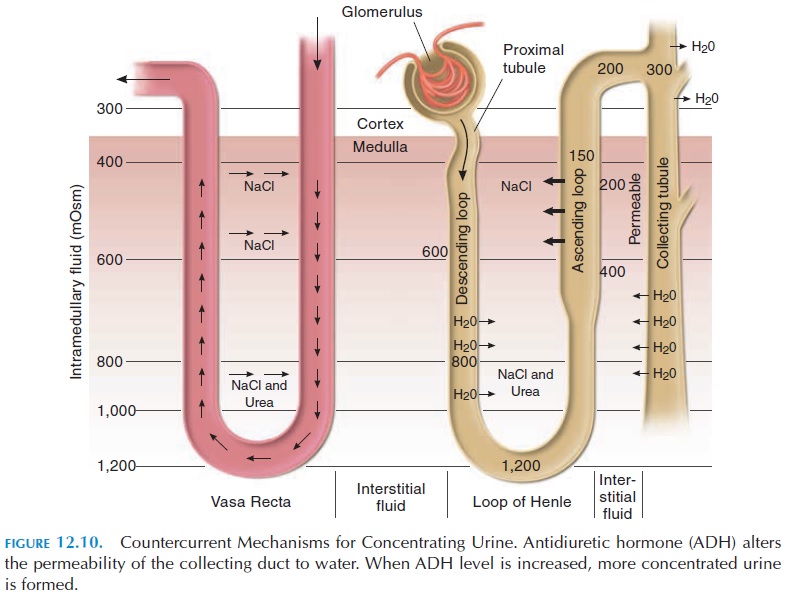 The volume of water absorbed from the filtrate as it travels through the rest of the renal tubule—distal convoluted tubule and collecting duct—is determined by the ADH level in the blood. ADH increases the per-meability of this segment of the tubule. If a person is dehydrated, more ADH is secreted and the permeabil-ity of this segment to water increases and more water moves back into the blood. Water absorption is also increased by the action of aldosterone, which in-creases sodium reabsorption from the filtrate, and water moves by osmosis along with the sodium. The fluid from all the nephrons (conveyed by the collect-ing ducts) that finally reaches the pelvis of the kidney is much less in volume, with a high concentration of waste products. Now referred to as urine, from the pelvis, the urine flows into the ureter.

The permeability properties of the ascending and descending limbs (ascending permeable to water; de-scending, impermeable), the countercurrent (direc-tion of flow opposite in ascending and descending limbs) flow of fluid in the tubule, the countercurrent flow of blood in the vasa recta, the permeability properties of the collecting duct (permeability to wa-ter increased by the presence of ADH), and the active and passive transport of solutes across the tubular cells contribute to the ability of the kidneys to con-centrate urine. (The process of concentrating urine is complex and beyond the scope of this book. For more details, please refer to more advanced physiol-ogy textbooks).

The kidney is important in acid-base balance. It can regulate the body pH by conserving or eliminating the bases (e.g., bicarbonate) or acids (e.g., hydrogen ions). The kidney has the capacity to secrete hydro-gen ions into the tubular fluid. Large quantities of hy- drogen ions can be eliminated because of the pres-ence of buffers in the urine that combine with the hy-drogen ions. (Buffers are substances that combine with hydrogen ions to form weaker acids).

The three major urinary buffers are bicarbonate (HCO3-), phosphate (HPO4—) and ammonia (NH3). Bi-carbonate present in the filtrate combines with hy-drogen ions to form carbonic acid (a weak acid). This acid dissociates into water and carbon dioxide. The carbon dioxide diffuses into the cells and is used to form more bicarbonate ions.

When the blood pH is alkaline, fewer hydrogen ions are secreted and more bases excreted.

THE COMPOSITION OF URINE

Urine is composed of 93% to 97% water. Urine pH ranges from 4.5–8.0. Normally, about 1,200 mL (73.2 in3) of urine is excreted each day. Urine is a sterile fluid. It only becomes contaminated with bacteria when it passes through the external genitalia. Some organic substances present include urea, creatinine, ammonia, uric acid, urobilin, and bilirubin.

Urobilin and bilirubin are breakdown products of hemoglobin and give urine its yellow color. Increased amounts are excreted when there is liver disease or when there is excessive breakdown of red blood cells. The color of urine may be altered by medications and diet (e.g., beets can cause reddish colored urine).

Urine normally does not contain glucose, or it only contains minute quantities. In conditions in which the blood glucose levels are persistently high, the kidney is unable to reabsorb all the glucose that is filtered. In this case, some glucose is lost in the urine. Glucose is absorbed from the tubules by carriers. When the level of glucose in the filtrate is higher than these carriers can absorb, glucose appears in the urine (glucosuria). The upper limit of the rate at which glucose can be transported is known astransport maximum (Tm). Tm is measured in milligrams /minute.

The most common cause of glucosuria is diabetes mellitus, in which the blood glucose levels are above normal because of the lack of insulin. Rarely, gluco-suria may be found in people whose renal tubules have a low Tm as a result of genetic mutations. One test used to detect and monitor diabetes mellitus is to test the urine for glucose.

Little, if any, protein is lost in the urine. In kidney disease or inflammation or infection of the urinary tract, protein may be detected in the urine.

The excretion of sodium, chloride, potassium, and other ions vary with diet, pH of urine, and effect of hormones.

The urine can be analyzed to reveal the state of the body. If body metabolism is altered, or if there is kid-ney dysfunction, substances that are not normally present in the urine may be found or the concentra-tion of normal constituents of urine may be increased to abnormal levels. The status of the kidney can also be analyzed by measuring urea and creatinine levels in blood.