Components of the Urinary System The urinary system consists of two kidneys that pro-duce urine, two ureters that convey the urine to the urinary bladder, where it is stored, and the urethra, which transports the urine out of the body (see Fig-ures 12.1and 12.2)

COMPONENTS OF THE URINARY SYSTEM

The urinary system consists of two kidneys that produce urine, two ureters that convey the urine to the urinary bladder, where it is stored, and the urethra, which transports the urine out of the body (see Fig-ures 12.1and 12.2) 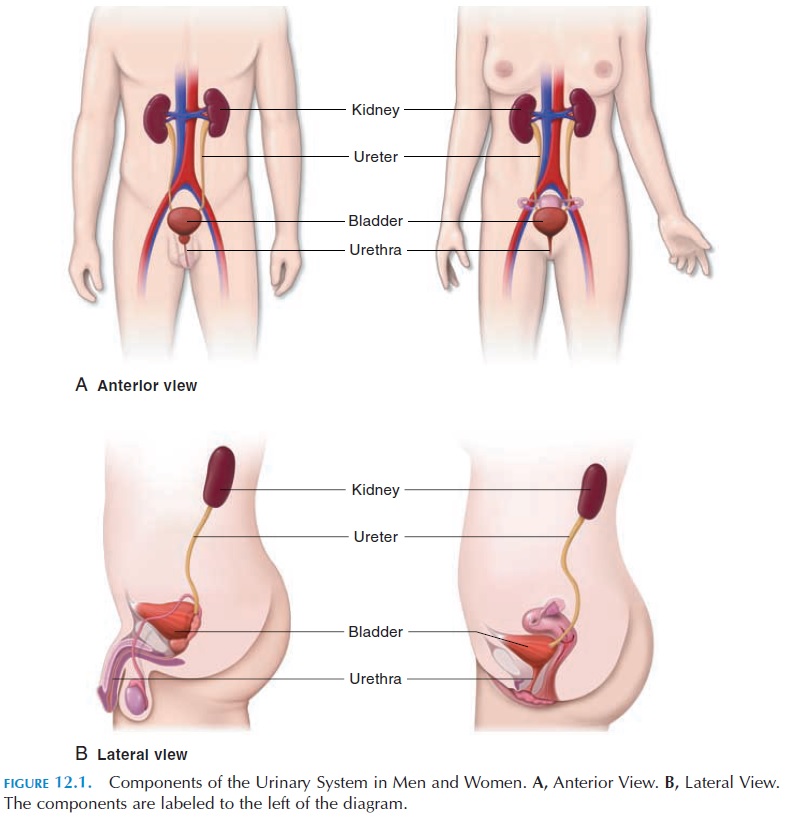 The paired kidneys (Figure 12.2) are bean-shaped, with the indentation (the hilum) facing medially. The renal artery, renal vein, lymphatics, and renal nerves enter and leave at the hilum.

An adult kidney is about 11.25 cm (4.43 in) long, 5–7.5 cm (2–3 in) wide, and about 2.5 cm (1 in) thick. The kidneys are located on either side of the vertebral column between the T12 and L3 vertebrae. The right kidney is slightly lower than the left because of the presence of the liver. These organs areretroperitoneal (i.e., they are located behind the peritoneum). The anterior aspect of the right kidney is related to the liver, the hepatic flexureof the colon, and the duodenum. The left kidney is covered by the stomach, pancreas, spleen, jejunum, and splenic flexure of the colon. The superior aspect of both the kidneys is covered by the adrenal glands. Posteriorly, the kidneys are related to the muscles of the back; the tendon of the transverses abdominis muscle, the quadratus lumborum and the psoas, the diaphragm, the eleventh and twelfth ribs on the left side and the twelfth rib on the right.

The kidneys are held in place, supported, and pro-tected by the surrounding fat and connective tissue. From deep to superficial, the kidney is invested by a fibrous layer of dense collagen fibers known as the re-nal capsule. The renal capsule forms a smooth andfirm covering to the organ. Medially, the renal cap-sule folds inward at the hilus and lines an internal cavity, the renal sinus. The renal blood vessels and the ureter pass through the hilus and branch in the renal sinus (see Figure 12.3). The kidney and its ves-sels are embedded in a mass of adipose tissue (adi-pose capsule, orperirenal fat). Both the kidneys and the fatty tissue are surrounded by a thick outer layer of fascia, the renal fascia, which anchors the kidneys to surrounding structures such as the peri-toneum anteriorly and the fascia covering the back muscles posteriorly. Because the kidneys are not di-rectly fixed to the abdominal wall, they move with the diaphragm during respiration.

If a section is made through the kidney, it is found to have two distinctive parts—the outer cortex and an inner medulla. Medially, the medulla forms 6–18 conical structures known as renal pyramids. The part of the cortex that dips between the pyramids is the renal column. The apex of the pyramids—the re-nal papilla, located medially—projects into the renalsinus. Urine that is formed is drained by the ducts in the papilla into cup-shaped structures known as re-nal calyces (singular, calyx). Four or five smaller ca-lyces—the minor calyces—empty into two to three larger, major calyces. The major calyces join and form a large chamber, the renal pelvis. The funnel-shaped pelvis, which occupies most of the renal si-nus, is continuous with the ureter.

Each kidney is made up of about 1.25 million tubu-lar, microscopic structures known as the nephrons (see Figure 12.4). The nephrons are the functional units of the kidney. These nephrons, if laid end to end, would extend about 145 kilometers. Study of the nephron structure is required to un-derstand the process of urine formation. Each nephron can be considered to be a long tube with one end closed. Imagine the closed end of the tube to be dilated and indented to form a cup.

The glomerular capsule is a double-walled sac. The outer (parietal) wall is continuous with the inner (vis- ceral) wall where the blood vessels enter. The cavity between the two layers is continuous with the lumen of the tubule. The outer and inner walls are made up of a single layer of epithelium. The visceral layer of the capsule is in close contact with the capillary en-dothelium and consists of modified epithelial cells (podocytes), with footlike processes known as pedicels. The pedicels wrap around the capillary en-dothelial cells and the slits between the pedicels (fil-tration slits) covered by a membrane (slit mem-brane), permitting the passage of small molecules.

The capillary endothelium is leaky, and the en-dothelial cells contain large pores or fenestrations. These two layers (the visceral layer of the glomerular capsule and the capillary endothelium), together with the basement membrane and the gelatinous, glyco-protein matrix between them, filter those specific substances from the blood that enter the lumen of the tubule. This filter, known as the filtration membrane or the endothelial-capsular membrane (see Figure 12.5), allows water and solutes from the plasma to pass through. However, it does not allow large struc-tures such as proteins. The renal tubule is arranged in the cortex and medulla of the kidney in a specific way (Figure 12.4). Most renal corpuscles are located in the renal cortex. Soon after it forms the glomerular capsule, the tubule becomes coiled—the proximal convoluted tubule.

The distal convoluted tubule comes in close contact with its own glomerulus before it joins a larger duct, the collecting duct. The collecting duct collects urine from many different nephrons. This duct descends into the medulla and opens at the apex of the papilla, emptying the urine into the calyces.

The urine collected from all the nephrons travels, via the pelvis, into the ureter and then into the uri-nary bladder, where it is temporarily stored until it is emptied in a convenient location and time. This urine is different from the filtrate that is originally present in the renal corpuscle.

The distal convoluted tubule, as mentioned, is in close proximity to its own glomerulus before it straightens and connects with the collecting duct. In this region, the wall of the afferent arteriole, the cells lining the tubule and other cells in the vicinity are modified to form the juxtaglomerular apparatus (see Figure12.6). The juxtaglomerular apparatus is an endocrine structure that secretes the erythropoietin and renin. Erythropoietin is a hormone that regu-lates the production of red blood cells by the bone marrow. The hormone renin is involved with the reg-ulation of blood pressure . The rate of secretion of these hormones is related to the compo-sition of blood in the afferent arteriole and the tubu-lar fluid in the distal convoluted tubule. In this way, if the oxygen content of blood is low, cell production is stimulated by erythropoietin. Similarly, if the blood pressure drops in the renal vessels, it is brought to normal by the actions of renin. Blood Supply to the Kidneys

The right and left renal arteries, branches of the ab-dominal aorta, supply the kidneys. They bring about 20% to 25% of the total cardiac output (the volume of blood pumped every minute by the ventricle of the heart) (i.e., about 1,200 mL (73.2 in3) of blood every minute) to the kidneys. After entering at the hilus, each artery divides and redivides in a unique manner until it forms numerous afferent arterioles (see Fig-ure 12.7). Each afferent arteriole reaches the renal corpuscle to form the network of glomerular capil-laries. The blood from the capillaries leaves the cor-puscle via theefferent arteriole. The efferent arteri-oles descend downward and form capillaries again around the loop of Henle. This enables fluid and other substances to be reabsorbed and/or secreted from the renal tubules into the blood and vice versa. These capillaries join and rejoin to form venules and veins that ultimately empty into therenal vein. Therenal vein conveys the blood into the inferior venacava.

The capillaries around the renal tubules of the jux-tamedullary nephrons are different from those of the cortical nephrons in that they form long loops paral-lel to the long loops of Henle. These capillaries are known as the vasa recta. This unique arrangement is required for the kidneys to concentrate urine.

Lymphatic Supply to the Kidneys

The kidney has an abundant supply of lymphatic ves-sels, which drain into the thoracic duct and, ulti-mately, into the subclavian vein.

Nerve Supply to the Kidneys

The renal nerves of the sympathetic nervous system are the major nerves that supply the kidneys. These nerves regulate the blood flow and pressure in the glomerulus by controlling the diameter of the affer-ent and efferent arterioles. They also stimulate the re-lease of renin from the juxtaglomerular apparatus when the blood pressure drops in the body. In addi- tion, they increase the reabsorption of water and sodium in the renal tubules. The latter is especially important when the blood volume drops, as in dehy-dration or profuse bleeding.

Two hormones play a major part in altering urine concentration. The antidiuretic hormone (ADH), also known as vasopressin, from the posterior pitu-itary has an effect on the collecting tubules, increas-ing the reabsorption of water back into the capillar-ies. The secretion of ADH is increased when the volume of blood decreases. By reducing the volume of water lost in the urine, the body tries to bring about homeostasis. Antidiuretic hormone, in addi-tion, stimulates the thirst center in the brain to in-crease water intake and constricts blood vessels to in-crease blood pressure.

Aldosterone, another hormone secreted by theadrenal cortex, plays an important role in kidney function. This hormone regulates the sodium content in the blood by altering the amount of sodium reab-sorbed by the kidney tubules. In conjunction with ADH, by increasing sodium absorption, it draws wa-ter back into the renal capillaries by osmosis.