Ø   There are periods  of high power  consumption as well  as  low power consumption.

Ø   It is therefore possible to commit the generating units from the available capacity into service to meet the demand.

Ø   The previous discussions all deal with the computational aspects for allocating load to  a plant  in  the  most  economical  manner.

Ø   The plant commitment and unit ordering schedules extend the period of optimization from a few minutes to several hours.

Ø    From daily schedules weekly patterns can be developed.

Ø   Likewise, monthly, seasonal and annual schedules can be prepared taking into consideration the repetitive nature of the load demand and seasonal variations.

Ø   Unit commitment schedules are thus required for economically committing the units in plants to service with the time at which individual units should be taken out from or returned to service.

Ø   Many constraints can be placed on the unit commitment problem. The list presented here is by no means exhaustive.

Ø   Each individual power system, power pool, reliability council, and so forth, may impose different rules on the scheduling of units, depending on the generation makeup, load-curve characteristics, and such.

Ø   Spinning reserve is the term used to describe the total amount of generation available from all units synchronized (i.e., spinning) on the system, minus the present load and losses being supplied.

Ø   Spinning reserve must be carried so that the loss of one or more units does not cause too far a drop in system frequency.

Ø   Quite simply, if one unit is lost, there must be ample reserve on the other units to make up for the loss in a specified time period.

Ø   Spinning reserve must be allocated to obey certain rules, usually set by regional reliability councils (in the United States) that specify how the reserve is to be allocated to various units.

Ø   Others calculate reserve requirements as a function of the probability of not having sufficient generation to meet the load.

Ø   This allows the automatic generation control system to restore frequency and interchange quickly in the event of a generating-unit outage.

Ø   Beyond spinning reserve, the unit commitment problem may involve various classes of

Ø   These include quick-start diesel or gas-turbine units as well as most hydro-units and pumped-storage hydro-units that can be brought on-line, synchronized, and brought up to full capacity quickly.

Ø   As such, these units can be “counted” in the overall reserve assessment, as long as their time to come up to full capacity is taken into account.

Ø   Reserves, finally, must be spread around the power system to avoid transmission system limitations (often called “bottling” of reserves) and to allow various parts of the system to run as “islands,” should they become electrically disconnected.

Ø     Thermal units usually require a crew to operate them, especially when turned on and turned off.

Ø     A thermal unit can undergo only gradual temperature changes, and this translates into a time period of some hours required to bring the unit on-line.

Ø     As a result of such restrictions in the operation of a thermal plant, various constraints arise, such as:

1.  Minimum up time: once the unit is running, it should not be turned off immediately

2.  Minimum down time: once the unit is decommitted, there is a minimum time before it can be recommitted.

Up to a certain number of hours, the cost of banking will be less than the cost of cooling, as is illustrated in Figure.

Finally, the capacity limits of thermal units may change frequently, due to maintenance or unscheduled outages of various equipment in the plant; this must also be taken.

Ø   Unit commitment cannot be completely separated from the scheduling of hydro-units.

Ø   In this text, we will assume that the hydrothermal scheduling (or “coordination”) problem can be separated from the unit commitment problem.

Ø   We, of course, cannot assert flatly that our treatment in this fashion will always result in an optimal solution. 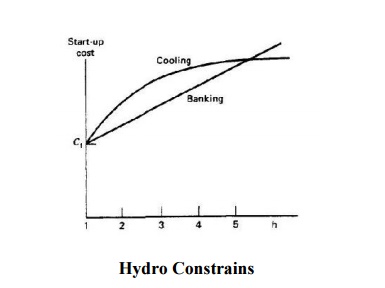 Ø Some units are given a must-run status during certain times of the year for reason of voltage support on the transmission network or for such purposes as supply of steam for uses outside the steam plant itself.

Ø   We will treat the “fuel scheduling” problem system in which some units have limited fuel, or else have constraints that require them to burn a specified amount of fuel in a given time, presents a most challenging unit commitment problem.