In general, the SELECT operation is denoted by

where <attribute name> is the name of an attribute of R, <comparison op> is nor-mally one of the operators {=, <, ≤, >, ≥, ≠}, and <constant value> is a constant value from the attribute domain. Clauses can be connected by the standard Boolean oper-ators and, or, and not to form a general selection condition. For example, to select the tuples for all employees who either work in department 4 and make over $25,000 per year, or work in department 5 and make over $30,000, we can specify the following SELECT operation:

In general, the result of a SELECT operation can be determined as follows. The <selection condition> is applied independently to each individual tuple t in R. This is done by substituting each occurrence of an attribute Ai in the selection condition with its value in the tuple t[Ai]. If the condition evaluates to TRUE, then tuple t is 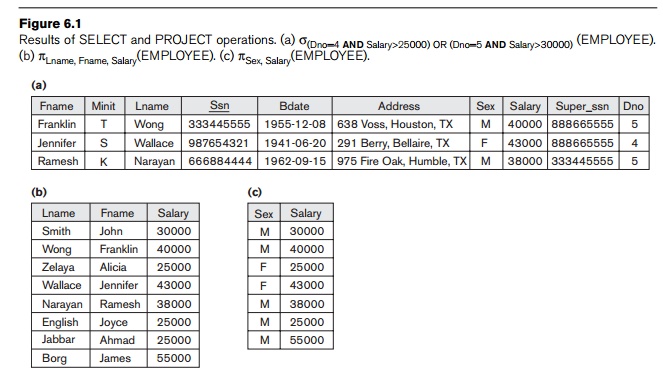 selected. All the selected tuples appear in the result of the SELECT operation. The Boolean conditions AND, OR, and NOT have their normal interpretation, as follows:

(NOT cond) is TRUE if cond is FALSE; otherwise, it is FALSE.

The SELECT operator is unary; that is, it is applied to a single relation. Moreover, the selection operation is applied to each tuple individually; hence, selection condi-tions cannot involve more than one tuple. The degree of the relation resulting from a SELECT operation—its number of attributes—is the same as the degree of R. The number of tuples in the resulting relation is always less than or equal to the number of tuples in R. That is, |σc (R)| ≤ |R| for any condition C. The fraction of tuples selected by a selection condition is referred to as the selectivity of the condition.

Notice that the SELECT operation is commutative; that is,

Hence, a sequence of SELECTs can be applied in any order. In addition, we can always combine a cascade (or sequence) of SELECT operations into a single SELECT operation with a conjunctive (AND) condition; that is,

In SQL, the SELECT condition is typically specified in the WHERE clause of a query. For example, the following operation:

would correspond to the following SQL query:

The resulting relation is shown in Figure 6.1(b). The general form of the PROJECT operation is

The result is shown in Figure 6.1(c). Notice that the tuple <‘F’, 25000> appears only once in Figure 6.1(c), even though this combination of values appears twice in the EMPLOYEE relation. Duplicate elimination involves sorting or some other tech-nique to detect duplicates and thus adds more processing. If duplicates are not elim-inated, the result would be a multiset or bag of tuples rather than a set. This was not permitted in the formal relational model, but is allowed in SQL (see Section 4.3).

as long as <list2> contains the attributes in <list1>; otherwise, the left-hand side is an incorrect expression. It is also noteworthy that commutativity does not hold on

In SQL, the PROJECT attribute list is specified in the SELECT clause of a query. For example, the following operation:

would correspond to the following SQL query:

Notice that if we remove the keyword DISTINCT from this SQL query, then dupli-cates will not be eliminated. This option is not available in the formal relational algebra.

3. Sequences of Operations and the RENAME Operation

The relations shown in Figure 6.1 that depict operation results do not have any names. In general, for most queries, we need to apply several relational algebra operations one after the other. Either we can write the operations as a single relational algebra expression by nesting the operations, or we can apply one operation at a time and create intermediate result relations. In the latter case, we must give names to the relations that hold the intermediate results. For example, to retrieve the first name, last name, and salary of all employees who work in depart-ment number 5, we must apply a SELECT and a PROJECT operation. We can write a single relational algebra expression, also known as an in-line expression, as follows:

Figure 6.2(a) shows the result of this in-line relational algebra expression. Alternatively, we can explicitly show the sequence of operations, giving a name to each intermediate relation, as follows:

It is sometimes simpler to break down a complex sequence of operations by specifying intermediate result relations than to write a single relational algebra expression. We can also use this technique to rename the attributes in the intermediate and 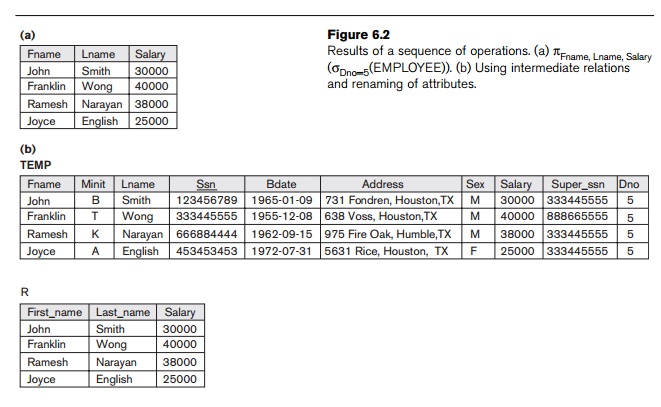 result relations. This can be useful in connection with more complex operations such as UNION and JOIN, as we shall see. To rename the attributes in a relation, we simply list the new attribute names in parentheses, as in the following example:

These two operations are illustrated in Figure 6.2(b).

We can also define a formal RENAME operation—which can rename either the relation name or the attribute names, or both—as a unary operator. The general RENAME operation when applied to a relation R of degree n is denoted by any of the following three forms:

In SQL, a single query typically represents a complex relational algebra expression. Renaming in SQL is accomplished by aliasing using AS, as in the following example: