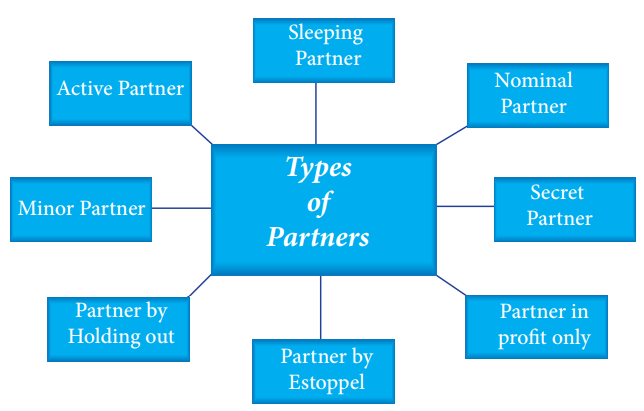 A partner who takes an active part in the conduct of the partnership business is known as an active partner. Though every partner is entitled to manage its affairs, all may not do so.

Such a partner contributes capital and shares in the profits or losses of the firm but does not take part in the management of the business. He may not be known as a partner to the outsiders; yet he is liable to third parties to an unlimited extent as any other partner.

Such a partner neither contributes any capital nor is he entitled to manage the affairs of the business. He only lends his name to the firm because on the strength of his name and reputation, the  firm may attract additional business and raise funds easily. A nominal partner, however, is liable for all the acts and debts of the firm as if he were a real partner, though he does not get any share in the firm’s profit.

iv. Partner in Profits only

When a person joins a firm as a partner on the condition that he is entitled to a specified share of the firm’s profit only, he is called a partner in profits only. It means that he will not be called upon to bear any portion of the losses sustained. He will, however, be liable to third parties for all the debts of the firm like any other partner. Such partners usually do not take part in the management of the business.

In case, a person represents himself/ herself by words or actions or has allowed him to be represented as a partner of the firm, even though he is not a partner, he is called partner by estoppels.

Such a partner cannot deny his liability, if outside party lends money to the firm supposing him to be a partner.

vi. Partner by Holding out

When a person is declared as a partner and he does not deny this even after becoming aware of it, he becomes liable to the third party, who lends money or credit to the firm on the basis of such a declaration.

A secret partner is one whose association is not known to the general public. Other than this distinct feature, he is like rest of the partners in all respects.

Under the Indian Majority Act, person who has not completed 18 years of age is a minor. However,  he will continue  to be a minor till he completes 21 years if a guardian has been appointed to the minor. He can be admitted to the benefits of partnership.

Partnership arises as a result of contract. But a minor has no contractual capacity. Though a partnership cannot be created with a minor as a partner, a minor can be admitted to the benefits of a partnership which is already in existence. The consent of all partners is a ‘must’ for such admission.