The terminology in this area presents problems because of a lack of universal agree- ment on all of the terms and because some of the categories overlap. Table 21.1 is a useful guide.

Malicious software can be divided into two categories: those that need a host program, and those that are independent. The former, referred to as parasitic, are essentially fragments of programs that cannot exist independently of some actual application program, utility, or system program. Viruses, logic  bombs, 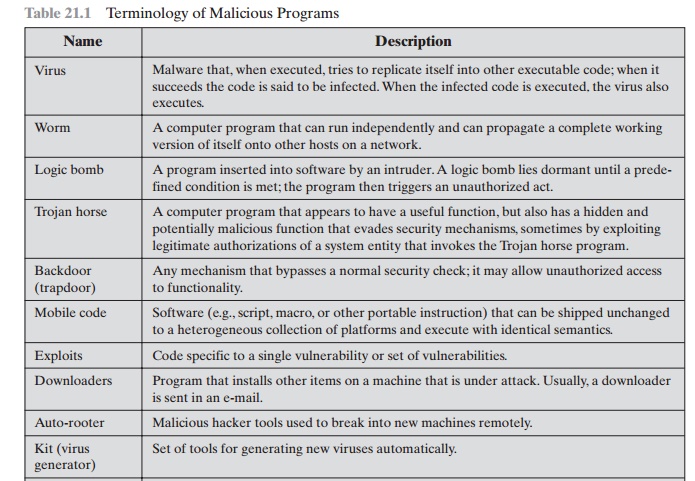 and backdoors are examples. Independent malware is a self-contained program that can be scheduled and run by the operating system. Worms and bot programs are examples.

We can also differentiate between those software threats that do not repli- cate and those that do. The former are programs or fragments of programs that are activated by a trigger. Examples are logic bombs, backdoors, and bot pro- grams. The latter consist of either a program fragment or an independent program that, when executed, may produce one or more copies of itself to   be activated later on the same system or some other system. Viruses and worms are examples.

In the remainder of this section, we briefly survey some of the key categories of malicious software, deferring discussion on the key topics of viruses and worms until the following sections.

A backdoor, also known as a trapdoor, is a secret entry point into a program that allows someone who is aware of the backdoor to gain access without going through the usual security access procedures. Programmers have used backdoors legiti- mately for many years to debug and test programs; such a backdoor is called a maintenance hook. This usually is done when the programmer is developing an application that has an authentication procedure, or a long setup, requiring the user to enter many different values to run the application. To debug the program, the developer may wish to gain special privileges or to avoid all the necessary setup and authentication. The programmer may also want to ensure that there is a method of activating the program should something be wrong with the authentication proce- dure that is being built into the application. The backdoor is code that recognizes some special sequence of input or is triggered by being run from a certain user ID or by an unlikely sequence of events.

Backdoors become threats when unscrupulous programmers use them to gain unauthorized access. The backdoor was the basic idea for the vulnerability portrayed in the movie War Games. Another example is that during the develop- ment of Multics, penetration tests were conducted by an Air Force “tiger team” (simulating adversaries). One tactic employed was to send a bogus operating system update to a site running Multics. The update contained a Trojan horse (described later) that could be activated by a backdoor and that allowed the tiger team to gain access. The threat was so well implemented that the Multics developers could not find it, even after they were informed of its presence [ENGE80].

It is difficult to implement operating system controls for backdoors. Security measures must focus on the program development and software update activities.

One of the oldest types of program threat, predating viruses and worms, is the logic bomb. The logic bomb is code embedded in some legitimate program that is set to “explode” when certain conditions are met. Examples of conditions that can be used as triggers for a logic bomb are the presence or absence of certain files, a particular day of the week or date, or a particular user running the appli- cation. Once triggered, a bomb may alter or delete data or entire files, cause a machine halt, or do some other damage. A striking example of how logic bombs can be employed was the case of Tim Lloyd, who was convicted of setting a logic bomb that cost his employer, Omega Engineering, more than $10 million, derailed its corporate growth strategy, and eventually led to the layoff of   80 workers [GAUD00]. Ultimately, Lloyd was sentenced to 41 months in prison and ordered to pay $2 million in restitution.

A Trojan horse1 is a useful, or apparently useful, program or command procedure containing hidden code that, when invoked, performs some unwanted or harmful function.

Trojan horse programs can be used to accomplish functions indirectly that an unauthorized user could not accomplish directly. For example, to gain access to the files of another user on a shared system, a user could create a Trojan horse program that, when executed, changes the invoking user’s file permissions so that the files are readable by any user. The author could then induce users to run the program by placing it in a common directory and naming it such that it appears to be a useful utility program or application. An example is a program that ostensibly produces a listing of the user’s files in a desirable format. After another user has run the program, the author of the program can then access the information in the user’s files. An example of a Trojan horse program that would be difficult to detect is a compiler that has been modified to insert additional code into certain programs as they are compiled, such as a system login program [THOM84]. The code creates a backdoor in the login program that permits the author to log on to the system using a special password. This Trojan horse can never be discovered by reading the source code of the login program.

Another common motivation for the Trojan horse is data destruction. The program appears to be performing a useful function (e.g., a calculator program), but it may also be quietly deleting the user’s files. For example, a CBS executive was victimized by a Trojan horse that destroyed all information contained in his com- puter’s memory [TIME90]. The Trojan horse was implanted in a graphics routine offered on an electronic bulletin board system.

Trojan horses fit into one of three models:

Mobile code refers to programs (e.g., script, macro, or other portable instruction) that can be shipped unchanged to a heterogeneous collection of platforms and execute with identical semantics [JANS01]. The term also applies to situations involving a large homogeneous collection of platforms (e.g., Microsoft Windows). Mobile code is transmitted from a remote system to a local system and then executed on the local system without the user’s explicit instruction. Mobile code often acts as a mechanism for a virus, worm, or Trojan horse to be transmitted to the user’s workstation. In other cases, mobile code takes advantage of vulnerabilities to perform its own exploits, such as unauthorized data access or root compromise. Popular vehicles for mobile code include Java applets, ActiveX, JavaScript, and VBScript. The most common ways of using mobile code for malicious operations on local system are cross-site scripting, interactive and dynamic Web sites,  e-mail

attachments, and downloads from untrusted sites or of untrusted software.

Viruses and other malware may operate in multiple ways. The terminology is far from uniform; this subsection gives a brief introduction to several related concepts that could be considered multiple-threat malware.

A blended attack uses multiple methods of infection or transmission, to maxi- mize the speed of contagion and the severity of the attack. Some writers characterize a blended attack as a package that includes multiple types of malware. An example of a blended attack is the Nimda attack, erroneously referred to as simply a worm. Nimda uses four distribution methods:

• E-mail: A user on a vulnerable host opens an infected e-mail attachment; Nimda looks for e-mail addresses on the host and then sends copies of itself to those addresses.

• Windows shares: Nimda scans hosts for unsecured Windows file shares; it can then use NetBIOS86 as a transport mechanism to infect files on that host in the hopes that a user will run an infected file, which will activate Nimda on that host.

• Web servers: Nimda scans Web servers, looking for known vulnerabilities in Microsoft IIS. If it finds a vulnerable server, it attempts to transfer a copy of itself to the server and infect it and its files.

• Web clients: If a vulnerable Web client visits a Web server that has been infected by Nimda, the client’s workstation will become infected.

Thus, Nimda has worm, virus, and mobile code characteristics. Blended attacks may also spread through other services, such as instant messaging and peer-to-peer file sharing.