Distributed denial of service (DDoS) attacks present a significant security threat to corporations, and the threat appears to be growing [VIJA02]. In one study, covering a three-week period in 2001, investigators observed more than 12,000 attacks against more than 5000 distinct targets, ranging from well-known ecommerce com- panies such as Amazon and Hotmail to small foreign ISPs and dial-up connections [MOOR01]. DDoS attacks make computer systems inaccessible by flooding servers, networks, or even end user systems with useless traffic so that legitimate users can no longer gain access to those resources. In a typical DDoS attack, a large number of compromised hosts are amassed to send useless packets. In recent years, the attack methods and tools have become more sophisticated, effective, and more difficult to trace to the real attackers, while defense technologies have been unable to with- stand large-scale attacks [CHAN02].

A denial of service (DoS) attack is an attempt to prevent legitimate users of a service from using that service. When this attack comes from a single host or net- work node, then it is simply referred to as a DoS attack. A more serious threat is posed by a DDoS attack. In a DDoS attack, an attacker is able to recruit a number of hosts throughout the Internet to simultaneously or in a coordinated fashion launch an attack upon the target. This section is concerned with DDoS attacks. First, we look at the nature and types of attacks. Next, we examine means by which an attacker is able to recruit a network of hosts for attack launch. Finally, this section looks at countermeasures.

A DDoS attack attempts to consume the target’s resources so that it cannot provide service. One way to classify DDoS attacks is in terms of the type of resource that is consumed. Broadly speaking, the resource consumed is either an internal host resource on the target system or data transmission capacity in the local network to which the target is attacked.

A simple example of an internal resource attack is the SYN flood attack.

Figure 21.9a shows the steps involved:

3.                        Each SYN packet is a request to open a TCP connection. For each such packet, the Web server responds with a SYN/ACK (synchronize/acknowl- edge) packet, trying to establish a TCP connection with a TCP entity at a spu- rious IP address. The Web server maintains a data structure for each SYN request waiting for a response back and becomes bogged down as more traffic floods in. The result is that legitimate connections are denied while the victim machine is waiting to complete bogus “half-open” connections.

The TCP state data structure is a popular internal resource target but by no means the only one. [CERT01] gives the following examples:

Figure 21.9b illustrates an example of an attack that consumes data transmis- sion resources. The following steps are involved:

1.                        The attacker takes control of multiple hosts over the Internet, instructing them to send ICMP ECHO packets3 with the target’s spoofed IP address to a group of hosts that act as reflectors, as described subsequently.

Another way to classify DDoS attacks is as either direct or reflector DDoS attacks. In a direct DDoS attack (Figure 21.10a), the attacker is able to implant zom- bie software on a number of sites distributed throughout the Internet. Often, the DDoS attack involves two levels of zombie machines: master zombies and slave zom- bies. The hosts of both machines have been infected with malicious code. The attacker coordinates and triggers the master zombies, which in turn coordinate and trigger the slave zombies. The use of two levels of zombies makes it more difficult to trace the attack back to its source and provides for a more resilient network of attackers.

The first step in a DDoS attack is for the attacker to infect a number of machines with zombie software that will ultimately be used to carry out the attack. The essen- tial ingredients in this phase of the attack are the following: 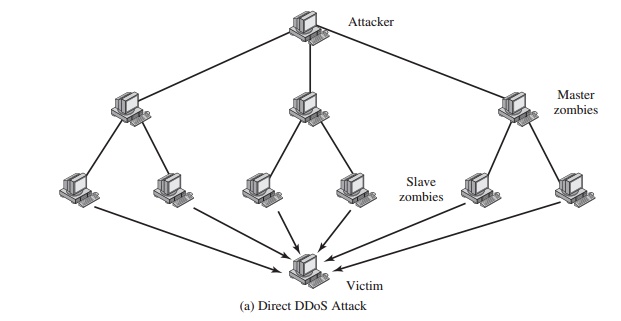 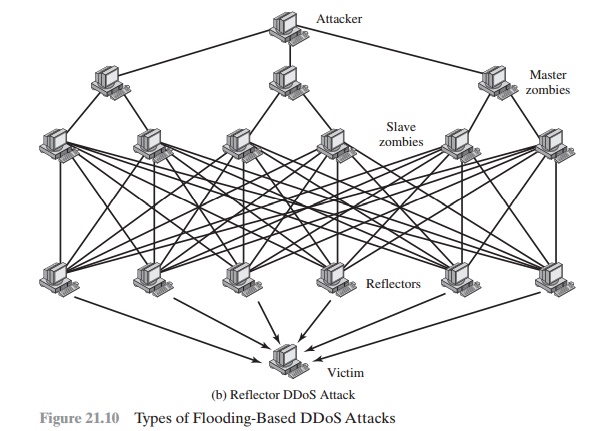 Random: Each compromised host probes random addresses in the IP address space, using a different seed. This technique produces a high volume of Internet traffic, which may cause generalized disruption even before the actual attack is launched.

•                          Hit-List: The attacker first compiles a long list of potential vulnerable machines. This can be a slow process done over a long period to avoid detec- tion that an attack is underway. Once the list is compiled, the attacker begins infecting machines on the list. Each infected machine is provided with a portion of the list to scan. This strategy results in a very short scanning period, which may make it difficult to detect that infection is taking place.

•                          Local subnet: If a host can be infected behind a firewall, that host then looks for targets in its own local network. The host uses the subnet address structure to find other hosts that would otherwise be protected by the firewall.

In general, there are three lines of defense against DDoS attacks [CHAN02]:

•                          Attack prevention and preemption (before the attack): These mechanisms enable the victim to endure attack attempts without denying service to legiti- mate clients. Techniques include enforcing policies for resource consumption and providing backup resources available on demand. In addition, prevention mechanisms modify systems and protocols on the Internet to reduce the possi- bility of DDoS attacks.

•                          Attack source traceback and identification (during and after the attack): This is an attempt to identify the source of the attack as a first step in preventing future attacks. However, this method typically does not yield results fast enough, if at all, to mitigate an ongoing attack.

The challenge in coping with DDoS attacks is the sheer number of ways in which they can operate. Thus DDoS countermeasures must evolve with the threat.