The ideal solution to the threat of viruses is prevention: Do not allow a virus to get into the system in the first place, or block the ability of a virus to modify any files containing executable code or macros. This goal is, in general, impossible to achieve, although prevention can reduce the number of successful viral attacks. The next best approach is to be able to do the following:

• Detection: Once the infection has occurred, determine that it has occurred and locate the virus.

• Identification: Once detection has been achieved, identify the specific virus that has infected a program.

• Removal: Once the specific virus has been identified, remove all traces of the virus from the infected program and restore it to its original state. Remove the virus from all infected systems so that the virus cannot spread further.

If detection succeeds but either identification or removal is not possible, then the alternative is to discard the infected file and reload a clean backup version.

A first-generation scanner requires a virus signature to identify a virus. The virus may contain “wildcards” but has essentially the same structure and bit pattern in all copies. Such signature-specific scanners are limited to the detection of known viruses. Another type of first-generation scanner maintains a record of the length of programs and looks for changes in length.

A second-generation scanner does not rely on a specific signature. Rather, the scanner uses heuristic rules to search for probable virus infection. One class of such scanners looks for fragments of code that are often associated with viruses. For example, a scanner may look for the beginning of an encryption loop used in a poly- morphic virus and discover the encryption key. Once the key is discovered, the scanner can decrypt the virus to identify it, then remove the infection and return      the program to  service.

Another second-generation approach is integrity checking. A checksum can be appended to each program. If a virus infects the program without changing the checksum, then an integrity check will catch the change. To counter a virus that is sophisticated enough to change the checksum when it infects a program, an encrypted hash function can be used. The encryption key is stored separately from the program so that the virus cannot generate a new hash code and encrypt that. By using a hash function rather than a simpler checksum, the virus is prevented from adjusting the program to produce the same hash code as before.

Third-generation programs are memory-resident programs that identify a virus by its actions rather than its structure in an infected program. Such programs have the advantage that it is not necessary to develop signatures and heuristics for a wide array of viruses. Rather, it is necessary only to identify the small set of actions that indicate an infection is being attempted and then to intervene.

Fourth-generation products are packages consisting of a variety of antivirus techniques used in conjunction. These include scanning and activity trap compo- nents. In addition, such a package includes access control capability, which limits the ability of viruses to penetrate a system and then limits the ability of a virus to update files in order to pass on the infection.

More sophisticated antivirus approaches and products continue to appear. In this subsection, we highlight some of the most important.

GENERIC DECRYPTION Generic decryption (GD) technology enables the antivirus program to easily detect even the most complex polymorphic viruses while maintaining fast scanning speeds [NACH97]. Recall that when a file containing a polymorphic virus is executed, the virus must decrypt itself to activate. In order to detect such a structure, executable files are run through a GD scanner, which contains the following elements:

• Emulation control module: Controls the execution of the target code.

At the start of each simulation, the emulator begins interpreting instructions in the target code, one at a time. Thus, if the code includes a decryption routine that decrypts and hence exposes the virus, that code is interpreted. In effect, the virus does the work for the antivirus program by exposing the virus. Periodically, the con- trol module interrupts interpretation to scan the target code for virus signatures.

During interpretation, the target code can cause no damage to the actual per- sonal computer environment, because it is being interpreted in a completely con- trolled environment.

The most difficult design issue with a GD scanner is to determine how long to run each interpretation. Typically, virus elements are activated soon after a program begins executing, but this need not be the case. The longer the scanner emulates a particular program, the more likely it is to catch any hidden viruses. However, the antivirus program can take up only a limited amount of time and resources before users complain of degraded system performance.

DIGITAL IMMUNE SYSTEM The digital immune system is a comprehensive approach to virus protection developed by IBM [KEPH97a, KEPH97b, WHIT99] and subsequently refined by Symantec [SYMA01]. The motivation for this development has been the rising threat of Internet-based virus propagation. We first say a few words about this threat and then summarize IBM’s approach.

Traditionally, the virus threat was characterized by the relatively slow spread of new viruses and new mutations. Antivirus software was typically updated on a monthly basis, and this was sufficient to control the problem. Also traditionally, the Internet played a comparatively small role in the spread of viruses. But as [CHES97] points out, two major trends in Internet technology have had an increasing impact on the rate of virus propagation in recent years:

• Integrated mail systems: Systems such as Lotus Notes and Microsoft Outlook make it very simple to send anything to anyone and to work with objects that are received.

• Mobile-program systems: Capabilities such as Java and ActiveX allow programs to move on their own from one system to another.

In response to the threat posed by these Internet-based capabilities, IBM has developed a prototype digital immune system. This system expands on the use of program emulation discussed in the preceding subsection and provides a general- purpose emulation and virus-detection system. The objective of this system is to provide rapid response time so that viruses can be stamped out almost as soon as they are introduced. When a new virus enters an organization, the immune system automatically captures it, analyzes it, adds detection and shielding for it, removes it, and passes information about that virus to systems running IBM AntiVirus so that it can be detected before it is allowed to run elsewhere. 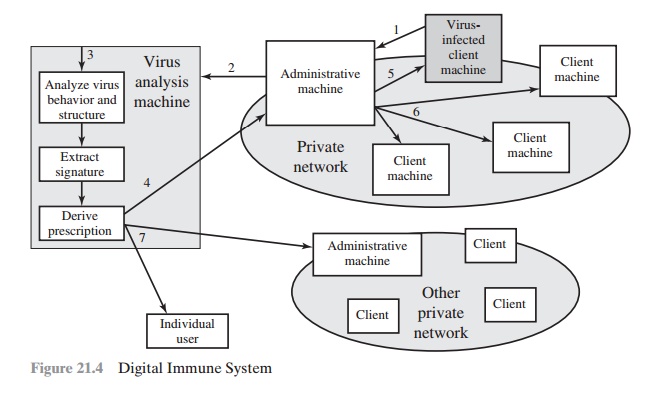 The success of the digital immune system depends on the ability of the virus analysis machine to detect new and innovative virus strains. By constantly analyzing and monitoring the viruses found in the wild, it should be possible to continually update the digital immune software to keep up with the threat.

BEHAVIOR-BLOCKING SOFTWARE Unlike heuristics or fingerprint-based scanners, behavior-blocking software integrates with the operating system of a host computer and monitors program behavior in real-time for malicious actions [CONR02, NACH02]. The behavior blocking software then blocks potentially malicious actions before they have a chance to affect the system. Monitored behaviors can include

Figure 21.5 illustrates the operation of a behavior blocker. Behavior-blocking software runs on server and desktop computers and is instructed through policies set by the network administrator to let benign actions take place but to intercede when unauthorized or suspicious actions occur. The module blocks any suspicious software from executing. A blocker isolates the code in a sandbox, which restricts the code’s access to various OS resources and applications. The blocker then sends an alert.

Because a behavior blocker can block suspicious software in real-time, it has an advantage over such established antivirus detection techniques as fingerprinting or 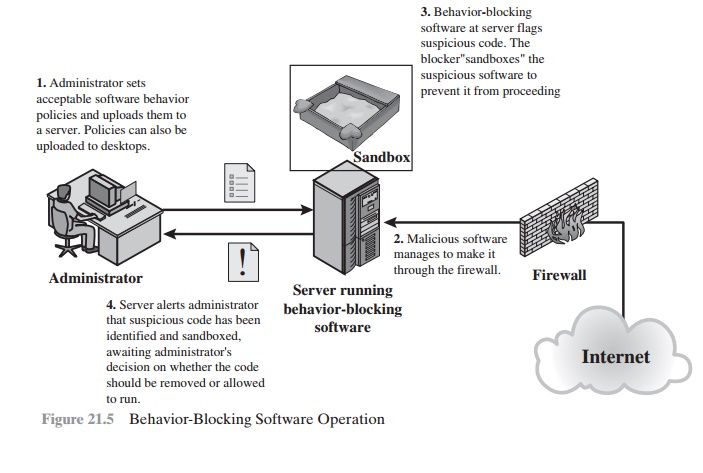 heuristics. While there are literally trillions of different ways to obfuscate and rearrange the instructions of a virus or worm, many of which will evade detection by a fingerprint scanner or heuristic, eventually malicious code must make a well-defined request to the operating system. Given that the behavior blocker can intercept all such requests, it can identify and block malicious actions regardless of how obfuscated the program logic appears to be.

Behavior blocking alone has limitations. Because the malicious code must run on the target machine before all its behaviors can be identified, it can cause harm before it has been detected and blocked. For example, a new virus might shuffle a number of seemingly unimportant files around the hard drive before infecting a sin- gle file and being blocked. Even though the actual infection was blocked, the user may be unable to locate his or her files, causing a loss to productivity or possibly worse.