England, France, Japan and SriLanka are examples of Unitary Form of governments.

Merits of unitary form of government

De-merits of unitary form of government

Unitary features of the indian constitution

•      Flexibility of the Constitution

•      Appointment of Governor by the central government

The classification of governments into unitary and federal is based on the nature of relations between the national and the regional governments.

Merits of federal form of government

De-merits of federal form of government 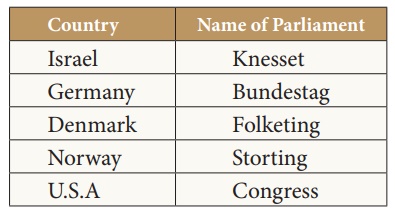 Federal features of the Indian constitution

The Constitution is the supreme law of the land. The laws enacted by the Centre and the states must confirm to its provisions.

Difference between Unitary form and Federal form of Government

Modern democratic governments are classified into parliamentary and presidential on the basis of the nature of relations between the executive and the legislative organs of the government.

The parliamentary system of government is the one in which the executive is responsible to the legislature for its policies and acts.

The parliamentary government is also known as cabinet government or responsible government or Westminster model of government and is prevalent in Britain, Japan, Canada and India among others.

Features of parliamentary form of government

• Leadership of the Prime Minister

Merits of the parliamentary form of government

• Harmony between Legislature and Executive

Demerits of the parliamentary form of government

• No Continuity of Policies

• Dictatorship of the Cabinet

• Against Separation of Powers

The presidential form of government

The Presidential Form Of Government is also known as non-responsible or non- parliamentary or fixed executive system of government, basically built on the principle of separation of power and is prevalent in the USA, Brazil, Russia and Sri Lanka among others.

Features of presidential form of government

The President is elected by an electoral college for a fixed tenure of four years. He cannot be removed by the Congress, except by impeachment for a grave unconstitutional act.

The President governs with the help of a cabinet or a smaller body called ‘Kitchen Cabinet’. It is only an advisory body and consists of non-elected departmental secretaries. They are selected and appointed by him, are responsible only to him and can be removed by him any time.

The President and his secretaries are not responsible to the Congress for their acts. They neither possess membership in the Congress, nor attend its sessions.

Transition from the hereditary monarchy to the Parliamentary Democracy. In 2006, the king abdicated the throne 34 years after ascending it. His son Crown Prince Jigme Khesar Namgyel Wangchuck became the fifth monarch and head of the state of the Himalayan kingdom. Now Bhutan is a Parliamentary Democracy and King Jigme a constitutional monarch. 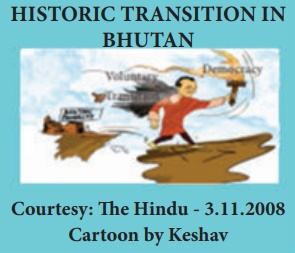 The President cannot dissolve the House of Representatives—the lower house of the Congress. The doctrine of separation of powers is the basis of the American presidential system. The legislative, executive and judicial powers of the government are separated and vested in three independent organs of the government.

Merits of the presidential system of government

Demerits of the presidential system of government

April Revolution and democracy in Nepal

On April, 2006 the leaders of Nepal vibrant pro-democracy civil society movement “Seven Party Alliance” (SPA) called for a million strong demonstration to be staged at 7 different points along the Ring road encircling the capital Kathmandu. The millions of citizens who made up the people's movement demanded an end to autocratic rule of monarchy and Restoration of total democracy in the Himalayan kingdom. An unprecedented development forced King Gyanendra to step down and paved the way for democracy 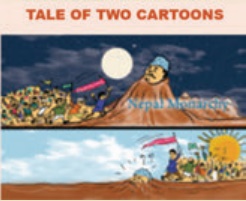 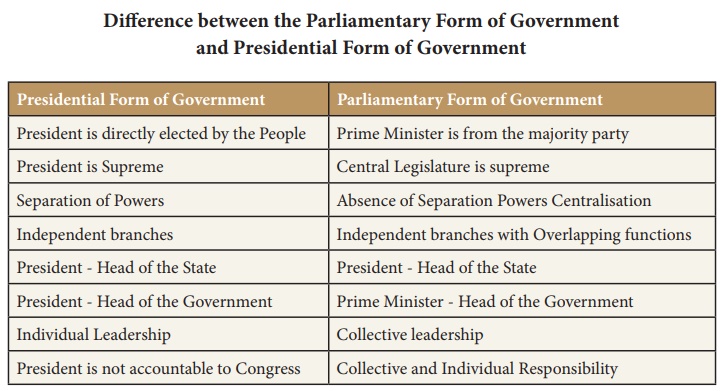 The relationship between the Centre and the State in India

Union List: Union list has 100 subjects. These include Foreign affairs, Defence, Armed forces, Posts and Telegraphs, inter-state trade and commerce and so on.

State List: The state list consists of 61 subjects, which include Public order in the state, police, prisons, Local Governments, agriculture and so on.

Concurrent List: The Concurrent list has 52 subjects which include Criminal and Civil procedures, marriage and divorce, economic and special planning, newspapers, books and printing presses, population control and so on.

THE CONCEPT OF GOVERNANCE

From Government to Governance

Good governance is an indeterminate term used in the international development literature to describe how public institutions conduct public affairs and manage public resources. Governance is 'the process of decision-making and the process by which decisions are implemented'.

'Government' and 'governance' are synonyms, both denoting the exercise of authority in an organization, institution or state.

Gross National Happiness is a developing philosophy as well as an 'index' which is used to measure the collective happiness in any specific nation.The concept was first mentioned in the constitution of Bhutan, which was enacted on 18 July 2008.

The term 'Gross National Happiness' was coined by the fourth king of Bhutan, Jigme Singye Wangchuck, in the 1970s. The GNH’s central tenets are: “Sustainable and equitable

GNH is distinguishable by valuing collective happiness as the goal of governance and by emphasising harmony with nature and traditional values.