A lathe is a machine tool that rotates the work piece against a tool whose position it controls. The spindle is the part of the lathe that rotates.

A lathe is a machine tool that rotates the work piece against a tool whose position it controls. The spindle is the part of the lathe that rotates. Various work holding attachments such as three jaw chucks, collets, and centers can be held in the spindle. The spindle is driven by an electric motor through a system of belt drives and gear trains. Spindle rotational speed is controlled by varying the geometry of the drive train.

The tailstock can be used to support the end of the workpiece with a center, or to hold tools for drilling, reaming, threading, or cutting tapers. It can be adjusted in position along the ways to accommodate different length workpieces. The tailstock barrel can be fed along the axis of rotation with the tailstock hand wheel.

The carriage controls and supports the cutting tool. It consists of:

A saddle that slides along the ways;

An apron that controls the feed mechanisms;

A cross slide that controls transverse motion of the tool (toward or away from the operator);

A tool compound that adjusts to permit angular tool movement; v a tool post that holds the cutting tools.

There are a number of different lathe designs, and some of the most popular are discussed here.

The basic, simplest and most versatile lathe.

This machine tool is manually operated that is why it requires skilled operators. Suitable for low and medium production and for repair works.

There are two tool feed mechanism in the engine lathes. These cause the cutting tool to move when engaged.

The lead screw will cause the apron and cutting tool to advance quickly. This is used for cutting threads, and for moving the tool quickly.

The feed rod will move the apron and cutting tool slowly forward. This is largely used for most of the turning operations.

Work is held in the lathe with a number of methods.

Between two centers. The work piece is driven by a device called a dog; the method is suitable for parts with high length-to-diameter ratio. 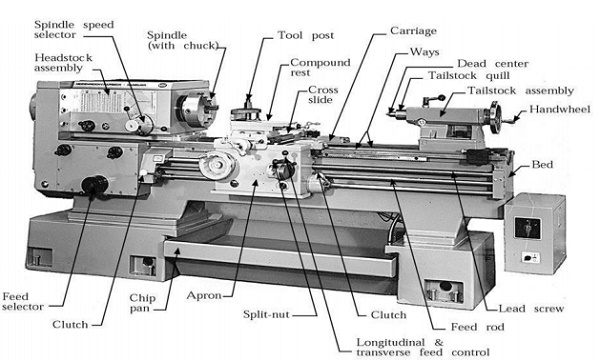 A 3 jaw self-centering chuck is used for most operations on cylindrical work parts. For parts with high length-to-diameter ratio the part is supported by center on the other end.

Collet consists of tubular bushing with longitudinal slits. Collets are used to grasp and hold bar stock. A collet of exact diameter is required to match any bar stock diameter.

A face plate is a device used to grasp parts with irregular shapes: 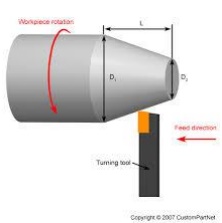 A taper is a conical shape. Tapers can be cut with lathes quite easily. There are some common methods for turning tapers on an center lathe,

Using a form tool: This type of tool is specifically designed for one cut, at a certain taper angle. The tool is plunged at one location, and never moved along the lathe slides. v Compound Slide

Method: The compound slide is set to travel at half of the taper angle. The tool is then fed across the work by hand, cutting the taper as it goes. v Off-Set Tail Stock: In this method the normal rotating part of the lathe still drives the workpiece (mounted between centres), but the centre at the tailstock is offset towards/away from the cutting tool. Then, as the cutting tool passes over, the part is cut in a conical shape. This method is limited to small tapers over long lengths.The tailstock offset h is defined by

h = Lsinα, where L is the length of work piece, and α is the half of the taper angle. 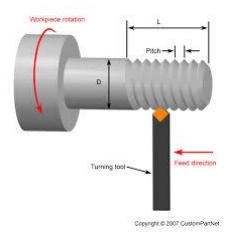 Different possibilities are available to produce a thread on a lathe. Threads are cut using lathes by advancing the cutting tool at a feed exactly equal to the thread pitch. The single-point cutting tool cuts in a helical band, which is actually a thread. The procedure calls for correct settings of the machine, and also that the helix be restarted at the same location each time if multiple passes are required to cut the entire depth of thread. The tool point must be ground so that it has the same profile as the thread to be cut.

Another possibility is to cut threads by means of a thread die (external threads), or a tap (internal threads). These operations are generally performed manually for small thread diameters.

A workpiece may be bolted or screwed to a faceplate, a large, flat disk that mounts to the spindle. In the alternative, faceplate dogs may be used to secure the work to the faceplate.

A workpiece may be mounted on a mandrel, or circular work clamped in a three- or four-jaw chuck. For irregular shaped workpieces it is usual to use a four jaw (independent moving jaws) chuck. These holding devices mount directly to the Lathe headstock spindle.

In precision work, and in some classes of repetition work, cylindrical workpieces are usually held in a collet inserted into the spindle and secured either by a draw-bar, or by a collet closing cap on the spindle. Suitable collets may also be used to mount square or hexagonal workpieces. In precision tool making work such collets are usually of the draw-in variety, where, as the collet is tightened, the workpiece moves slightly back into the headstock, whereas for most repetition work the dead length variety is preferred, as this ensures that the position of the workpiece does not move as the collet is tightened.

A soft workpiece (e.g., wood) may be pinched between centers by using a spur drive at the headstock, which bites into the wood and imparts torque to it.

One of the important aspects in manufacturing calculation is how to find and calculate the machining time in a machining operation. Generally, machining is family of processes or operations in which excess material is removed from a starting work piece by a sharp cutting tool so the remaining part has the desired geometry and the required shape. The most common machining operations can be classified into four types: turning, milling, drilling and lathe work.

The term "capstan lathe" overlaps in sense with the term "turret lathe" to a large extent. In many times and places, it has been understood to be synonymous with "turret lathe". In other times and places it has been held in technical contradistinction to "turret lathe", with the difference being in whether the turret's slide is fixed to the bed (ram-type turret) or slides on the bed's ways (saddle-type turret). The difference in terminology is mostly a matter of United Kingdom and Common wealth usage versus United States usage. American usage tends to call them all "turret lathes".

The word "capstan" could logically seem to refer to the turret itself, and to have been inspired by the nautical capstan. A lathe turret with tools mounted in it can very much resemble a nautical capstan full of handspikes. This interpretation would lead Americans to treat "capstan" as a synonym of "turret" and "capstan lathe" as a synonym of "turret lathe". However, the multi-spoked handles that the operator uses to advance the slide are also called capstans, and they themselves also resemble the nautical capstan.

No distinction between "turret lathe" and "capstan lathe" persists upon translation from English into other languages. Most translations involve the term "revolver", and serve to translate either of the English terms.

The words "turret" and "tower", the former being a diminutive of the latter, come ultimately from the Latin "turris", which means "tower", and the use of "turret" both to refer to lathe turrets and to refer to gun turrets seems certainly to have been inspired by its earlier connection to the turrets of fortified buildings and to siege towers. The history of the rook in chess is connected to the same history, with the French word for rook, tour, meaning "tower".

It is an interesting coincidence that the word "tour" in French can mean both "lathe" and "tower", with the first sense coming ultimately from Latin "tornus", "lathe", and the second sense coming ultimately from Latin "turris", "tower". "Tour revolver", "tour tourelle", and "tour tourelle revolver" are various ways to say "turret lathe" in French.

During the 1870s through 1890s, the mechanically automated "automatic" turret lathe was developed and disseminated. These machines can execute many part-cutting cycles without human intervention. Thus the duties of the operator, which were already greatly reduced by the manual turret lathe, were even further reduced, and productivity increased. These machines use cams to automate the sliding and indexing of the turret and the opening and closing of the chuck. Thus, they execute the part-cutting cycle somewhat analogously to the way in which an elaborate cuckoo clock performs an automated theater show. Small- to medium-sized automatic turret lathes are usually called "screw machines" or "automatic screw machines", while larger ones are usually called "automatic chucking lathes", "automatic chuckers", or "chuckers".