For relatively high take-off thrust or for low-speed cruise applications, turboprop engines are employed to accelerate a secondary propellant stream, which is much larger than the primary flow through the engine.

In general, the turbine section of a turboprop engine is very similar to that of a turbojet engine. The main difference is the design and arrangement of the turbines. In the turbojet engine the turbine is designed to extract only enough power from the high velocity gases to drive the compressor, leaving the exhaust gases with sufficient velocity to produce the thrust required of the engine. The turbine of the turboprop engine extracts enough power from the gases to drive both the compressor and the propeller. Only a small amount of power is left as thrust. Usually a turboprop engine has two or more turbine wheels. Each wheel takes additional power from the jet stream, with the result that the velocity of the jet is decreased substantially.

Figure 6 shows a schematic diagram of a turboprop engine. The air enters the diffuser as in a turbojet and is compressed in a compressor before passing to the combustion chamber. The compressor in the turboprop is essentially an axial flow compressor. The products of combustion expand in a two-stage or multistage turbine. One stage of the turbine drives the compressor and the other drives the propeller.

Thus the turbine expansion is used to drive both compressor as well as propeller and less energy is available for expansion in the nozzle. Due to lower speeds of propeller a reduction gear is necessary between turbine and the propeller. About 80 to 90% of the available energy in exhaust is extracted by the turbine while rest, about 10 to 20%,

contributes the thrust by increasing the exhaust jet velocity.

Turboprop engines combine in them the high take-off thrust and good propeller efficiency of the propeller engines at speeds lower than 800 km/h and the small weight, lower frontal area and reduced vibration and noise of the pure turbojet engine.

Its operational range is between that of the propeller engines and turbojets though it can operate in any speed up to 800 km/h. 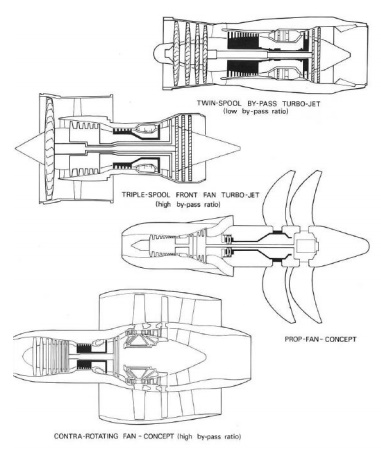 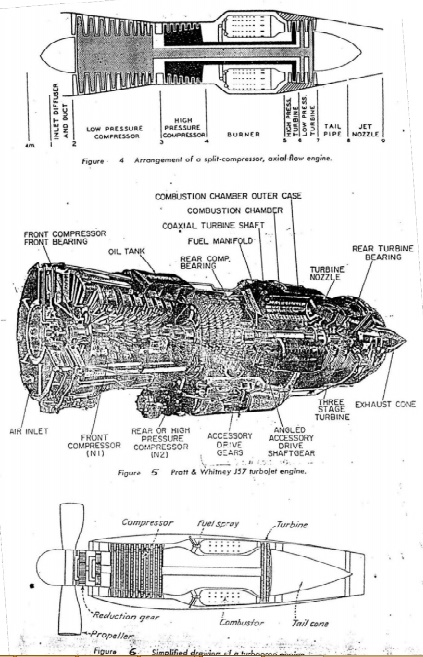 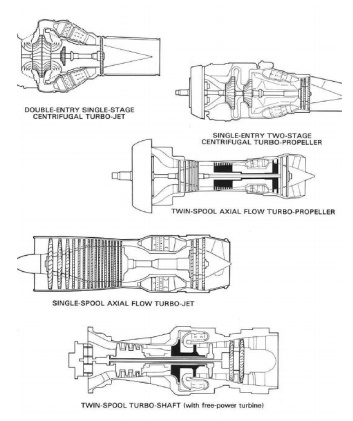 The power developed by the turboprop remains almost same at high altitudes and high speeds as that under sea-level and take-off conditions because as speed increases ram effect also increases. The specific fuel consumption increases with increase in speed and altitude. The thrust developed is high at take-off and reduces at increased speed.

Turboprop engines have a higher thrust at take-off and better fuel economy.

Ø       The frontal area is less than air screw so that drag is reduced.

Ø       3.The turboprop can operate economically over a wide range of speeds ranging from low speeds, where pure jet engine is uneconomical, to speeds of about 800 km/h where the propeller engine efficiency is low.

Ø       It is easy to maintain and has lower vibrations and noise.

Ø       The power output is not limited as in the case of propeller engines (air screw).

Ø       The multicast arrangement allows a great flexibility of operation over a wide range of speeds.

Ø     The main disadvantage is that at high speeds due to shocks and flow separation, the propeller efficiency decreases rapidly, thereby, putting up a maximum speed limit on the engine.

It  requires  a  reduction  gear  which  increases  the  cost  and  also consumes certain energy developed by the turbine in addition to requiring more space.