The pulse jet engine is an intermittent, compressor less aerodynamic power plant, with few or none of the mechanical features of conventional aviation power plants.

The pulse jet engine is an intermittent, compressor less aerodynamic power plant, with few or none of the mechanical features of conventional aviation power plants. In its simplest form, the operation of the pulse jet depends only on the properties of atmospheric air, a fuel, a shaped tube and some type of flow-check valve, and not on the interposition of pistons, impellers, blades or other mechanical part whose geometry and motion are controllable. The pulse jet differs from other types of air breathing engines, in that the air flow through it is intermittent. It can produce static thrust.

During starting compressed air is forced into the inlet which opens the spring loaded flapper valves. In practice this may done by blowing compressed air though the valve box or by the motion of the engine through the air. The air that enters the engine passes by the fuel injector and is mixed with the fuel(Fig. A) 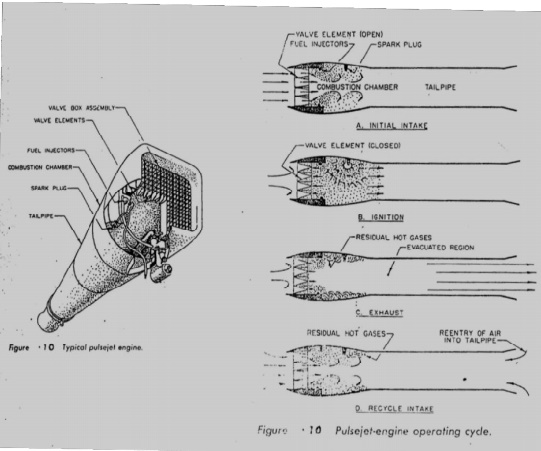 When the fuel-air mixture reaches the proper proportion to burn, it is ignited by a spark plug. The burning takes place with explosive force, thus causing a very rapid rise in pressure, the increase in pressure forces the flapper valves shut and propels the charge of burned gases out of the tail pipe, as in B of the figure. 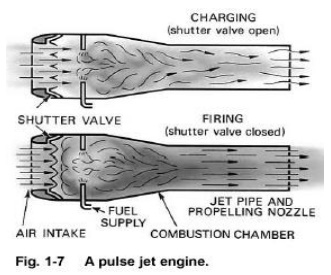 After the pressure has reached its lowest point, atmospheric pressure (and the ram pressure if the engine is in flight) forces air into the engine through the flapper valves. At the same time, air will also be drawn in through tailpipe, since the pressure within the tailpipe is low and has nothing to prevent the entry of air, At this point, part D in figure, the engine is ready to begin another cycle. The fequency of cycles depends upon the duct shape and working temperature in V-1 rocket it was about 40 c/s which corresponds to about 2400 rpm of a two stroke reciprocating engine.

Once the engine operation has become established, the spark plug is no longer necessary. The reignition between each cycle is accomplished when the fresh charge of fuel and air is ignited by some residual flame which is left over from the preceding cycle. The air flow which reenters the tailpipe is important from both the engine operation and thrust stadpoints. Experiments have shown that the amount of air which flows into the tailpipe can be several times as much as that which flows into the inlet. This mass flow of air increases the thrust of the engine by providing additional mass for the explosion pressure to work on. It also increases the pressure within the engine at the beginning of each explosion cycle, resulting in a more efficient burning process. Reentry of air into the tailpipe is made more difficult as the airspeed surrounding the engine increases. The thrust of the engine, therefore, tends to decrease with speed. As the speed increases, the amount of reentering air flow decreases to the point where the internal pressure is eventually too low to support combustion and the engine will no longer operate.

One interesting and sometimes objectionable, feature of the pulse jet engine is the sound it makes when in operation. The sound is a series of loud reports caused by the firing of the individual charges of fuel and air in the combustion chamber. The frequency of the reports depends upon the length of the engine form the inlet valves to the end of the tailpipe and upon the temperature of the gases within the engine. The resulting sound is a continuous, loud, and vibratory note that can usually be heard for several kilometers.

The pulse jet has low thermal efficiency. In early designs the efficiency obtained was about 2 to 3% with a total flight life of 30 to 60 minutes. The maximum operating speed is seriously limited by tow factors: (i) It is possible to design a good diffuser at high speeds. (ii) The fiepper valves, the only mechanical part in the pulse jet, also have certain natural frequency and if resonance with the cycle frequency occurs then the valve may remain open and no compression will take place. Also, as the speed increases it is difficult for air to flow back. This reduces total compression pressure as well as the mass flow of air which results in inefficient combustion and lower thrust. The reduction in thrust and efficiency is quite sharp as the speed increases.

Ø       This is very simple device only next to ramjet and is light in weight. It requires very small and occasional maintenance.

Unlike ramjet, it has static thrust because of the compressed air starting, thusit does not need a device for initial propulsion. The static thrust is even more than the cruise thrust.

Ø       It can run on an almost any type of liquid fuel without much effect on the performance. It can also operate on gaseous fuel with little modifications.

Ø       1.The biggest disadvantage is very short life of flapper valve and high rates of fuel consumption. The SFC is as high as that of ramjet.

Ø       The speed of the pulse jet is limited within a very narrow range of about 650-800 km/h because of the limitations in the aerodynamic design of an efficient diffuser suitable for a wide range.

Ø       The high degree of vibrations due to intermittent nature of the cycle and the buzzing noise has made it suitable for pilotless crafts only.

Ø       It has lower propulsive efficiency that turbojet engine.

Ø       The operational range of the pulse jet is limited in altitude range.