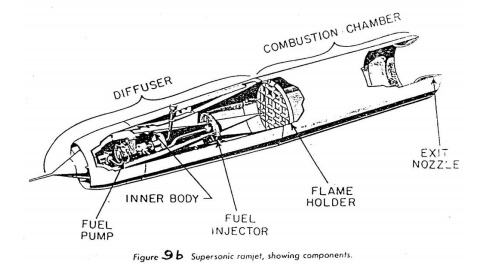 The ramjet engine is an air breathing engine which operates on the same principle as the turbojet engine. Principle of Operation,Advantages, Disadvantages, Application.

The ramjet engine is an air breathing engine which operates on the same principle as the turbojet engine. Its basic operating cycle is similar to that of the turbojet. It compresses the incoming air by ram pressure, adds the heat energy to velocity and produces thrust. By converting kinetic energy of the incoming air into pressure, the ramjet is able to operate without a mechanical compressor. Therefore the engine requires no moving parts and is mechanically the simplest type of jet engine which has been devised. Since it depends on the velocity of the incoming air for the needed compression, the ramjet will not operate statistically. For this reason it requires a turbojet or rocket assist to accelerate it to operating speed.

At supersonic speeds the ramjet engine is capable of producing very high thrust with high efficiency. This characteristic makes it quite useful on high speed aircraft and missiles, where its great power and low weight make flight possible in regions where it would be impossible with any other power plant except the rocket. Ramjets have also been used at subsonic speeds where their low cost and light weight could be used to advantage.

The ramjet consists of a diffuser, fuel injector, flame holder, combustion chamber and exit nozzle (Ref figure 9). The air taken in by the diffuser is compressed in two stages.

The external compression takes place takes place because the bulk of the approaching engine forces the air to change its course. Further compression is accomplished in the diverging section of the ramjet diffuser. Fuel is injected into and mixed with air in the diffuser. The flame holder provides a low velocity region favourable to flame propagation, and the fuel-air mixture recirculates within this sheltered area and ignites the fresh charge as it passes the edge of the flame holder. The burning gases then pass through the combustion chamber, increasing in temperature and therefore in volume. Because the volume of air increases, it must speed up to get out of the way off the fresh charge following behind it, and a further increase in velocity occurs as the air is squeezed out through the exit nozzle. The thrust produced by the engine is proportional to this increase in velocity. 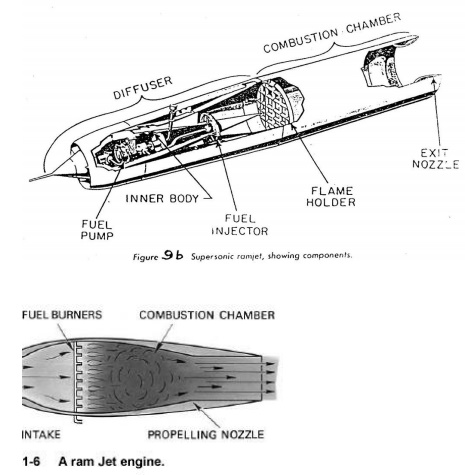 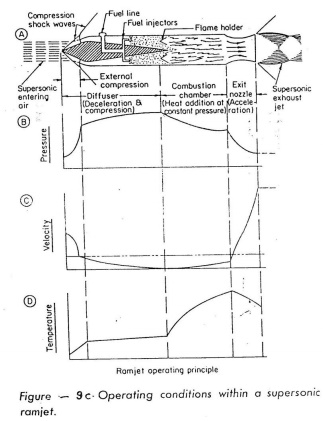 Ø     Ramjet is very simple and does not have any moving part. It is very cheap and requires almost no maintenance.

Ø     Since turbine is not used the maximum temperature which can be allowed in ramjet is very high, about 2000 0C as compared to about 1000 0C in turbojets.

This allows a greater thrust to be obtained by burning fuel at A/F ratio of about 15.1 which gives higher temperatures.

Ø     The SFC is better than turbojet engines at high speed and high altitudes.

Ø     There seems to be no upper limit to the flight speed of the ramjet.

Ø     Since the compression of air is obtained by virtue of its speed relative to the engine, the take-off thrust is zero and it is not possible to start a ramjet without an external launching device.

Ø     The engine heavily relies on the diffuser and it is very difficult to design a diffuser which will give good pressure recovery over a wide range of speeds.

combustion occurs which will reduce the efficiency of the plant if not recovered in nozzle during expansion.

Ø     Due to its high thrust at high operational speed, it is widely used in high speed aircrafts and missiles.

Ø     Subsonic ramjets are used in target weapons, in conjunction with turbojets or rockets for getting the starting torque.