Differentiate between a truss and a frame., 1 Derivation of stiffness matrix and finite element equation for a truss element. 2.Computation of strain and stress in the truss element

Differentiate between a truss and a frame.

Loads act only at the joints.

Truss members undergo only a xial deformation (along the length of the member).

Frame members can undergo axial and bending deformations (translations as well as rotations).

1 Derivation of stiffness matrix and finite element equation for a truss element.

There are two joints for an arbitrarily inclined single truss element (at an angle q , positive counter-clockwise from +ve x- axis). For each joint i, there are two degrees of freedom, i.e.,

Note that the deformations occurring in the truss members are so small that they are only axial. The axial displacement of the truss can be resolved along horizontal x-axis and vertical y-axis. But in our derivation, let us resolve the horizontal and vertical displacements (in xy-axes) of a joint along and perpendicular to the truss member (in x’y-axes). Refer to the Figure in the next page. Note ui sinq component acting towards negative  y -direction and all other components acting towards in +ve x - and  y -directions.

where [T]is the transformation matrix It is important to note that the displacements v ¢(i) and v(i) are both zero since there can be no displacements perpendicular to the length of the member. Also [T ]-1 =[T ]T

where [T]is the transformation matrix

The arbitrarily inclined truss member can be thought of as a simple bar element oriented at the same angle q . Hence, we can write the finite element equation for this inclined bar element (in x¢ycoordinate system) as 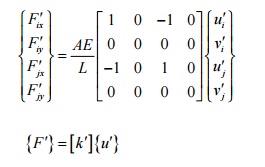 Substituting {F ¢}and {u¢}from the previous equations, we can write

Pre-multiplying the above equation by [T]-1 ,

Carrying out the matrix multiplication for [k , we obtain

Computation of strain and stress in the truss element 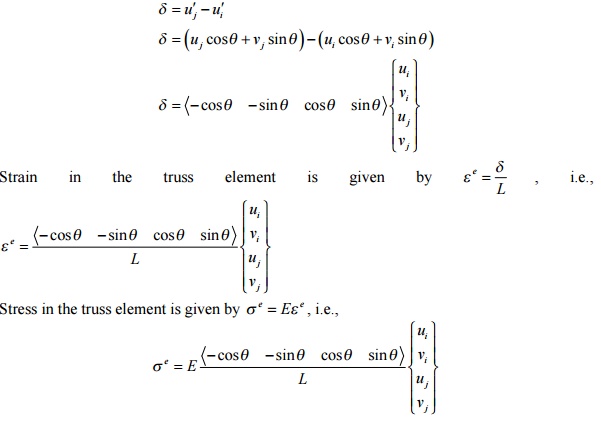 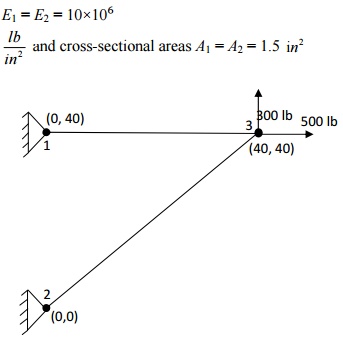 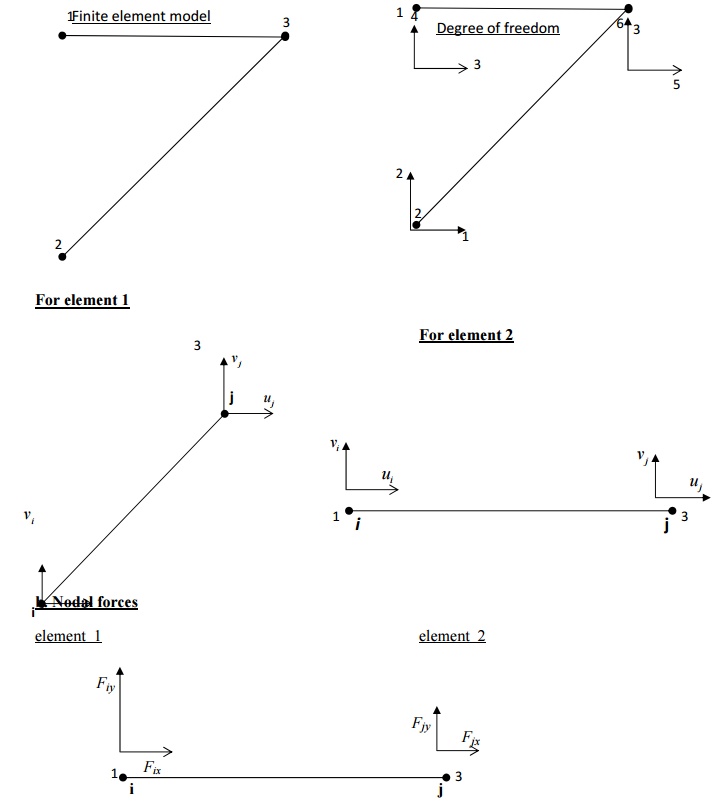 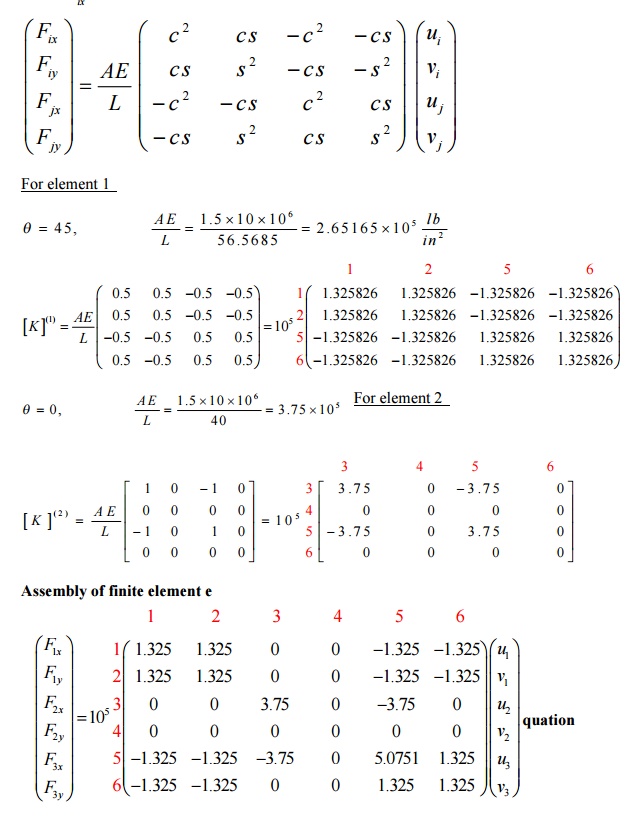 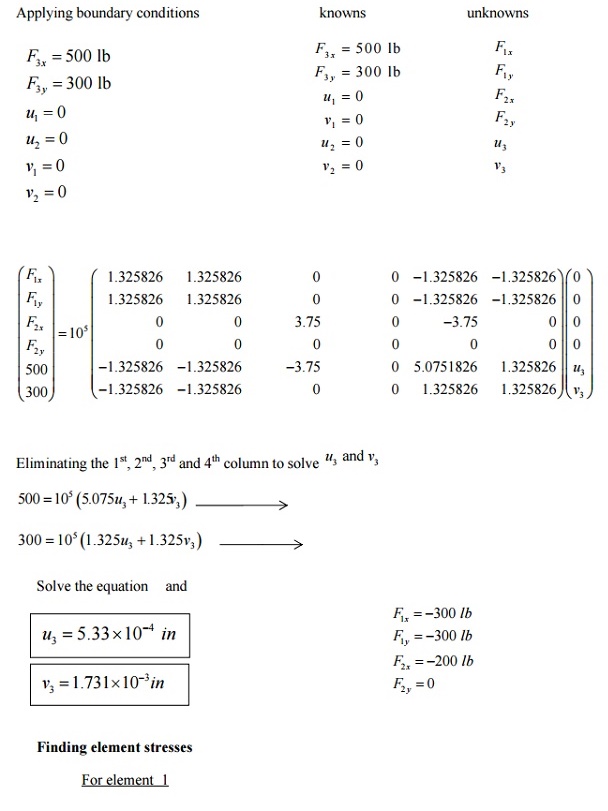 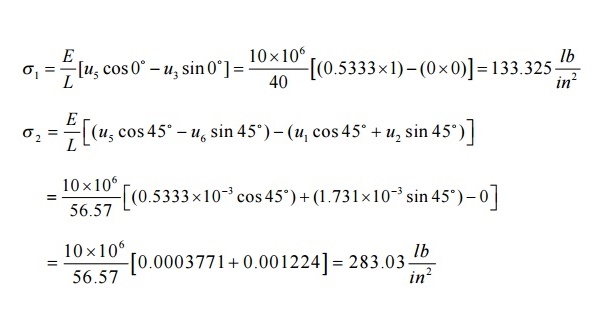 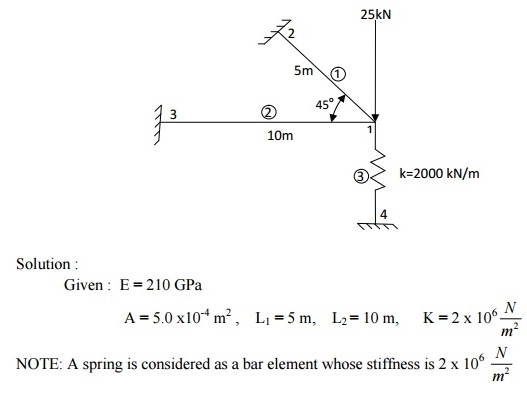 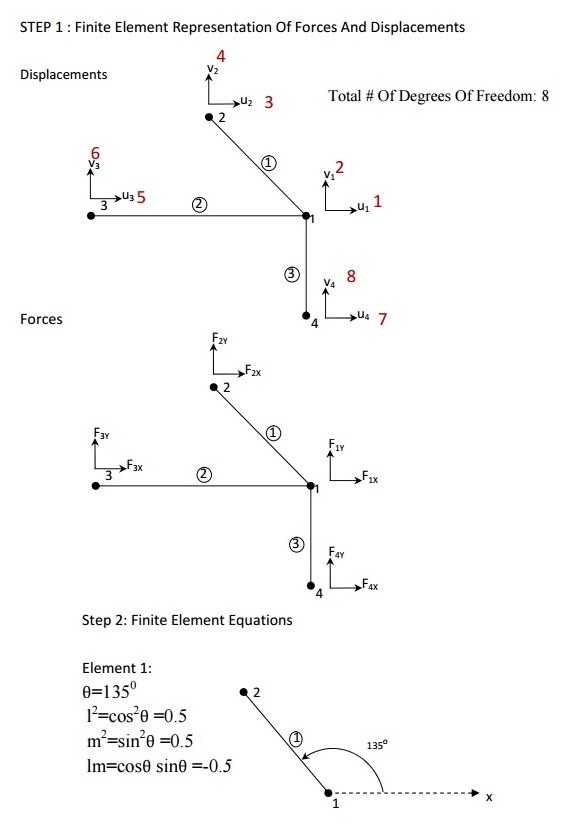 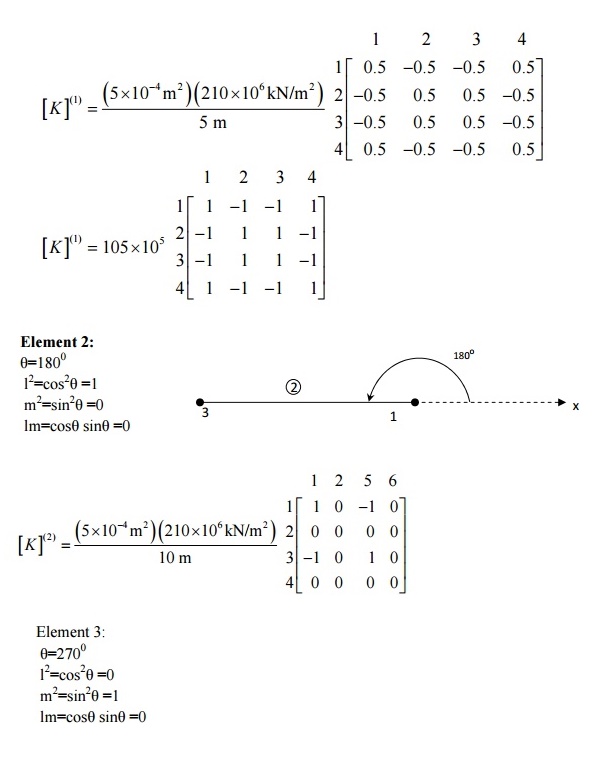 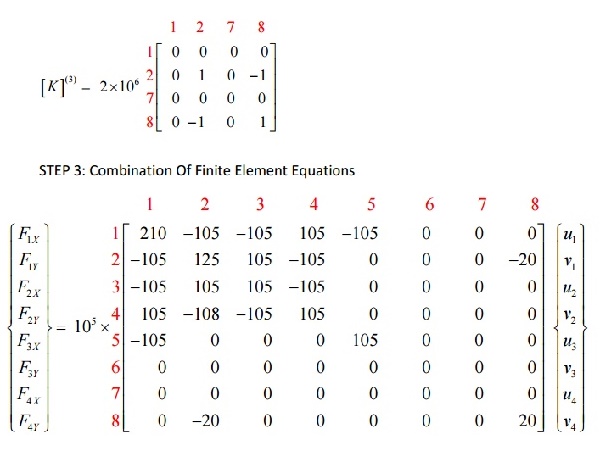 Check whether there are as many unknowns as knowns.

Find the reactions at supports by substituting the known nodal values 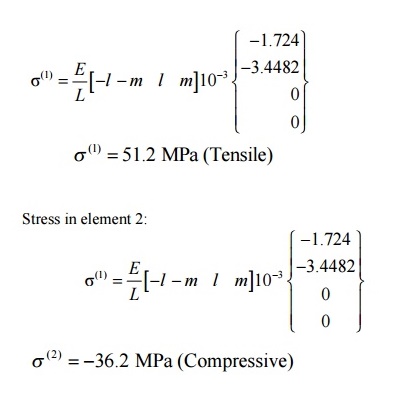 The beam structure looks very different from a spring. However, its behavior is very similar. Deflection occurs along the x-axis only. The only significant difference between the beam and a spring is that the beam has a variable cross-sectional area. An exact solution can be found if the beam is divided into an infinite number of elements, then, each element can be considered as a constant cross-section spring element, obeying the relation F = ku, where k is the stiffness constant of a beam element and is given by k = AE/L.

In order to keep size of the matrices small (for hand- calculations), let us divide the beam into only three elements. For engineering accuracy, the answer obtained will be in an acceptable range. If needed, accuracy can be improved by increasing the number of elements.

Here, the question of which cross-sectional area to be used for each beam section arises. A good approximation would be to take the diameter of the mid-section and use that to approximate the area of the element. 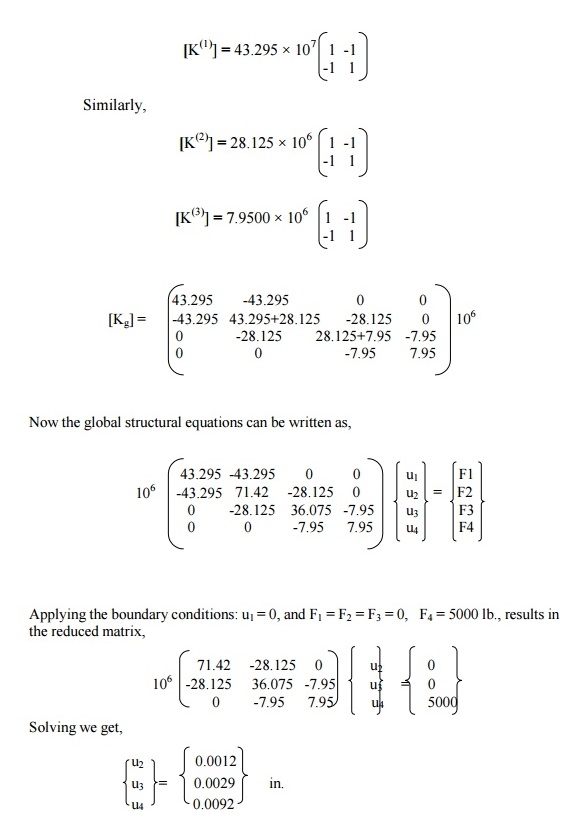 The deflections u2, u3, and u4 are only the approximate values, which can be improved by dividing the beam into more elements. As the number of elements increases, the accuracy will improve.