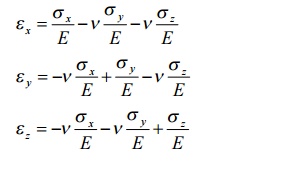 substituting s z in equations 1 and 2 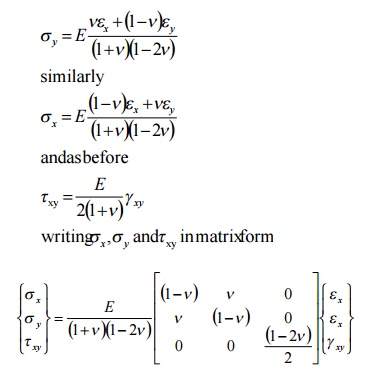 Review of the Basic Theory

In general, the stresses and strains in a structure consist of six components: 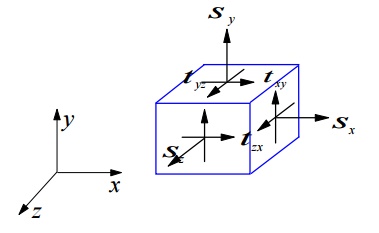 Under contain conditions, the state of stresses and strains can be simplified. A general 3-D structure analysis can, therefore, be reduced to a 2-D analysis. 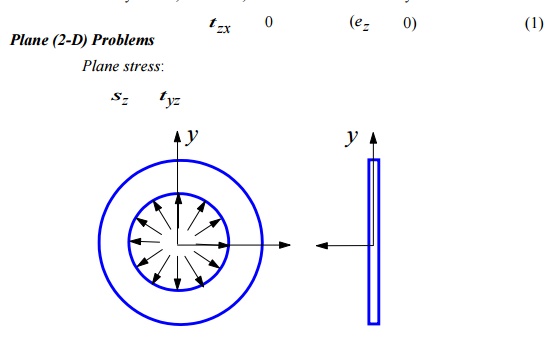 A long structure with a uniform cross section and transverse loading along its length (z-direction).

For elastic and isotropic materials, we have,

where  e0  is the initial strain  E the Young’s modulus, n  the Poisson’s ratio and G the shear modulus.  Note that,

which means that there are only two independent materials constants for homogeneous and isotropic materials.

We can also express stresses in terms of strains by solving the above equation,

The above relations are valid for plane stress case. For plane strain case, we need to replace the material constants in the above equations in the following fashion,

For example, the stress is related to strain by

Initial strains due to temperature change (thermal loading) is given by,

where a is the coefficient of thermal expansion, T the change of temperature. Note that if the structure is free to deform under thermal loading, there will be no (elastic) stresses in the structure. 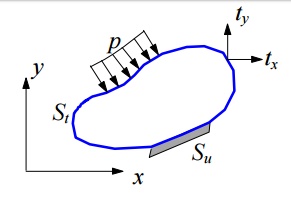 The boundary S of the body can be divided into two parts, Su and St. The boundary conditions (BC’s) are described as, in which tx and ty are traction forces (stresses on the boundary) and the barred quantities are those with known values.

In FEM, all types of loads (distributed surface loads, body forces, concentrated forces and moments, etc.) are converted to point forces acting at the nodes.

The exact solution (displacements, strains and stresses) of a given problem must satisfy the equilibrium equations, the given boundary conditions and compatibility conditions (structures should deform in a continuous manner, no cracks and overlaps in the obtained displacement field)