This cycle is the aerobic phase of carbohydrate metabolism and follows the anaerobic pathway from the stage of pyruvate and is called as citric acid cycle or TCA cycle.

Under aerobic conditions, pyruvate is oxidatively decarboxylated to acetyl coenzyme A (active acetate) before entering the citric acid cycle. This occurs in the mitochondrial matrix and forms a link between glycolysis and TCA cycle.

This reaction is catalysed by the multienzyme complex known as pyruvate dehydrogenase complex. 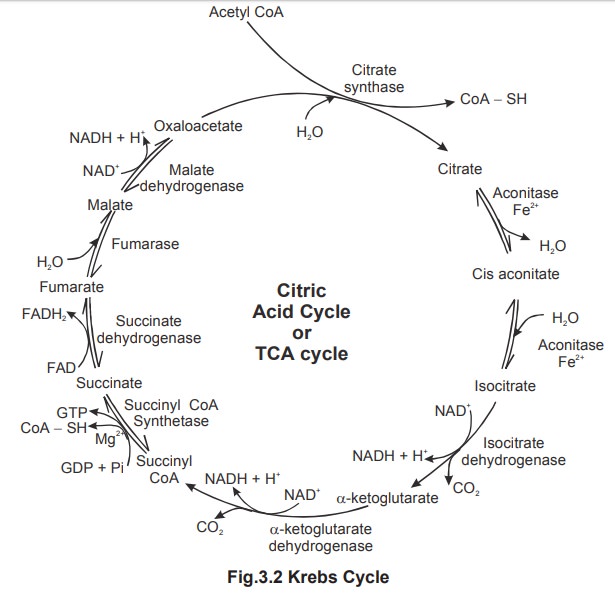 Reactions of the citric acid cycle

There are eight steps in the cycle and the reactions are as follows.

The first reaction of the cycle is the condensation of acetyl CoA with oxaloacetate to form citrate, catalyzed by citrate synthase. This is an irreversible reaction.

2. Formation of isocitrate via cis aconitate

The enzyme aconitase catalyzes the reversible transformation of citrate to isocitrate, through the intermediary formation of cis aconitate.

3. Oxidation of isocitrate to a-ketoglutarate and CO2

In the next step, isocitrate dehydrogenase catalyzes oxidative decarboxylation of isocitrate to form a-ketoglutarate.

4. Oxidation of a-keto glutarate to succinyl CoA and CO2

The next step is another oxidative decarboxylation, in which a-ketoglutarate is converted to succinyl CoA and CO2 by the action of the a-ketoglutarate dehydrogenase complex. The reaction is irreversible.

5. Conversion of succinyl CoA to succinate

The product of the preceding step, succinyl CoA is converted to succinate to continue the cycle. GTP is formed in this step (substrate level phosphorylation).

The enzyme that catalyzes this reversible reaction is called succinyl CoA synthetase or succinic thiokinase.

6. Oxidation of succinate to fumarate

7. Hydration of fumarate to malate

The reversible hydration of fumarate to malate is catalyzed by fumarase.

8. Oxidation of malate to oxaloacetate

The last reaction of the citric acid cycle is, NAD linked malate - dehydrogenase which catalyses the oxidation of malate to oxaloacetate.

If one molecule of the substrate is oxidized through NADH in the electron transport chain three molecules of ATP will be formed and through FADH2, two ATP molecules will be generated.

As one molecule of glucose gives rise to two molecules of pyruvate by glycolysis, intermediates of citric acid cycle also result as two molecules.