Carbohydrate as a source of energy

The major function of carbohydrate in metabolism is to serve as fuel and get oxidised to provide energy for other metabolic processes.

Carbohydrate as a source of energy

The major function of carbohydrate in metabolism is to serve as fuel and get oxidised to provide energy for other metabolic processes. The metabolic intermediates are used for various biosynthetic reactions. For this purpose, carbohydrate is utilized by the cells mainly in the form of glucose. A major part of dietary glucose is converted to glycogen for storage in liver. Glucose is degraded in the cell by way of a series of phosphorylated intermediates mainly via two metabolic pathways.

Glycolysis occurs virtually in all tissues. Erythrocytes and nervous tissues derive the energy mainly from glycolysis. This pathway is unique in the sense that it can proceed in both aerobic (presence of O2) and anaerobic (absence of O2) conditions. All the enzymes of glycolysis are found in the extra mitochondrial soluble fraction of the cell, the cytosol.

Series of reactions of glycolytic pathway which degrades glucose to pyruvate are represented below. The sequence of reactions occurring in glycolysis may be considered under four stages.

This is a preparatory phase. Before the glucose molecule can be split, the rather asymmetric glucose molecule is converted to almost symmetrical form, fructose 1,6-diphosphate by donation of two phosphate groups from ATP. 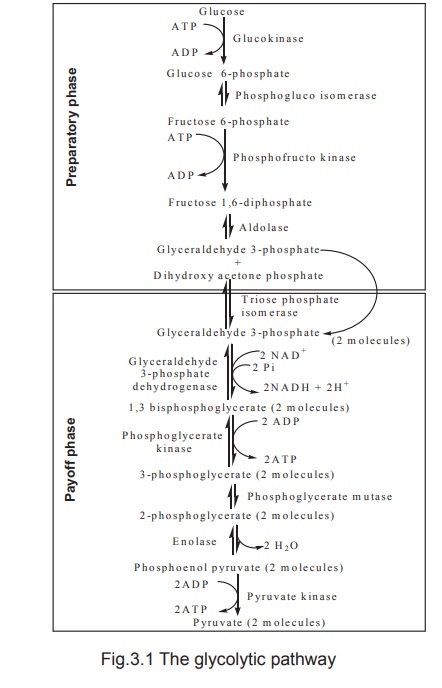 1. Uptake of glucose by cells and its phosphorylation

Glucose is freely permeable to liver cells, intestinal mucosa and kidney tubules where glucose is taken up by 'active' transport. In other tissues insulin facilitates the uptake of glucose. Glucose is phosphorylated to form glucose 6-phosphate. The enzyme involved in this reaction is glucokinase. This reaction is irreversible.

Fructose 6-phosphate is phosphorylated irreversibly at 1 position catalyzed by the enzyme phosphofructokinase to produce fructose 1,6-diphosphate.

Fructose 1,6 diphosphate is split by the enzyme aldolase into two molecules of triose phosphates, an aldotriose-glyceraldehyde 3-phosphate and one ketotriose - dihydroxy acetone phosphate. The reaction is reversible. There is neither expenditure of energy nor formation of ATP.

It is the energy yielding stage. Reactions of this type in which an aldehyde group is oxidised to an acid are accompanied by liberation of large amounts of potentially useful energy.

1. Oxidation of glyceraldehyde 3-phosphate to 1,3-bisphosphoglycerate

The reaction is catalyzed by the enzyme phosphoglycerate kinase. The high energy phosphate bond at position - 1 is transferred to ADP to form ATP molecule.

2. Conversion of 2-phosphoglycerate to phosphoenol pyruvate

The reaction is catalyzed by the enzyme enolase, the enzyme requires the presence of either Mg2+ or Mn2+ ions for activity.

3. Conversion of phosphoenol pyruvate to pyruvate

During glycolysis NAD+ is reduced to NADH. At the same time, glyceraldehyde 3-phosphate is oxidized to 1,3-bisphosphoglycerate. To conserve the coenzyme NAD+, NADH must be reoxidized. Under anaerobic conditions this is done when pyruvic acid is converted to lactic acid. In the presence of oxygen, NADH, can be oxidized to NAD+ with the help of the respiratory enzymes.

During glycolysis ATP molecules are used and formed in the following reactions (aerobic phase). 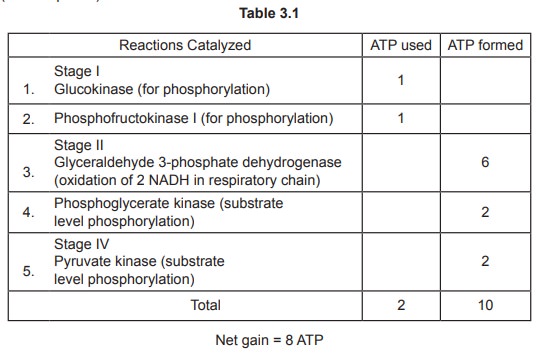 In the absence of O2, reoxidation of NADH at glyceraldehyde 3-phosphate dehydrogenase stage cannot take place in respiratory chain. But the cells have limited coenzyme. Hence to continue the glycolysis NADH must be reoxidized to NAD+. This is achieved by reoxidation of NADH by conversion of pyruvate to lactate (without producing ATP).

It is to be noted that in the reaction catalyzed by glyceraldehyde 3-phosphate dehydrogenase, therefore, no ATP is produced.

In the anaerobic phase oxidation of one glucose molecule produces 4 - 2 = 2 ATP.