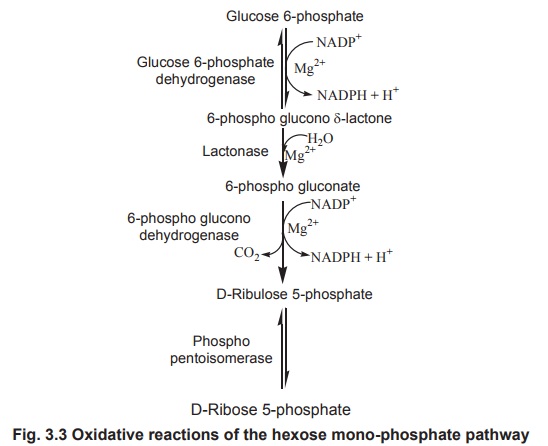 Unlike glycolysis and Krebs cycle which are primarily concerned with the generation of ATP, HMP shunt generates a different type of metabolic energy - the reducing power.

Although glycolysis and citric acid cycle are the common pathways by which animal tissues oxidise glucose to CO2 and H2O with the liberation of energy in the form of ATP, a number of alternative pathways are also discovered. The most important one is Hexose Monophosphate Shunt Pathway (HMP shunt). The pathway occurs in the extra mitochondrial soluble portion of the cells.

Unlike glycolysis and Krebs cycle which are primarily concerned with the generation of ATP, HMP shunt generates a different type of metabolic energy - the reducing power. Some of the electrons and hydrogen atoms of fuel molecules are conserved for biosynthetic purposes rather than ATP formation. This reducing power of cells is NADPH (reduced nicotinamide adenine dinucleotide phosphate). 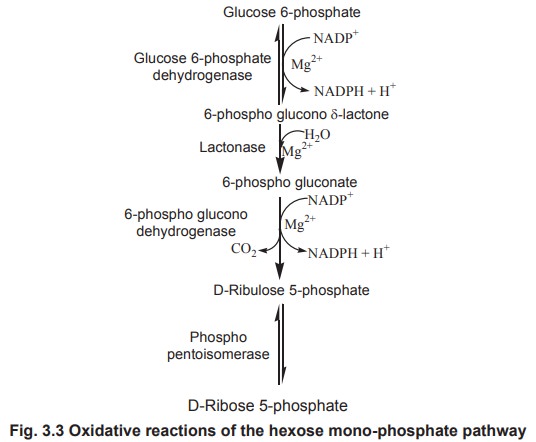 The fundamental difference between NADPH and NADH (reduced nicotinamide adenine dinucleotide) is that NADH is oxidised by the respiratory chain to generate ATP whereas NADPH serves as a hydrogen and electron donor in reductive biosynthesis, for example in the biosynthesis of fatty acids and steroids.

The 6-phospho glucono d-lactone is unstable and the ester spontaneously hydrolyses to 6-phosphogluconate. The enzyme that catalyses the reaction is lactonase

In some tissues, the hexose phosphate pathway ends at this point, and its overall equation is

The net result is the production of NADPH, a reductant for biosynthetic reactions, and ribose 5-phosphate, a precursor for nucleotide synthesis.