The synthesis of glucose from non-carbohydrate precursors is known as gluconeogenesis.

The synthesis of glucose from non-carbohydrate precursors is known as gluconeogenesis. The major site of gluconeogenesis is liver. It usually occurs when the carbohydrate in the diet is insufficient to meet the demand in the body, with the intake of protein rich diet and at the time of starvation, when tissue proteins are broken down to amino acids.

There are three essentially irrevesible steps in glycolysis which are

In gluconeogenesis these three reactions are bypassed or substituted by the following news ones. 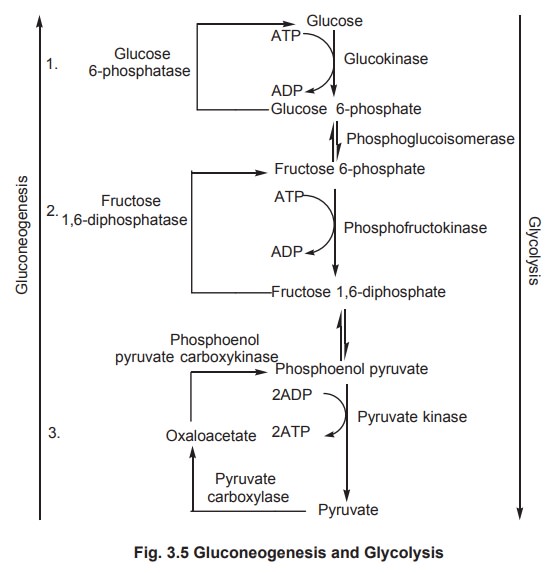 1. The formation of phosphoenol pyruvate begins with the carboxylation of pyruvate at the expense of ATP to form oxalo acetate.

Oxaloacetate is converted to phosphoenolpyruvate by phosphorylation with GTP, accompanied by a simultaneous decarboxylation.

Propionate is a major source of glucose in ruminants, and enters the main gluconeogenic pathway via the citric acid cycle after conversion to succinyl CoA.

This dihydroxy acetone phosphate enters gluconeogenesis pathway and gets converted to glucose. Liver and kidney are able to convert glycerol to blood glucose by making use of the above enzymes.

The liver and skeletal muscles exhibit a special metabolic cooperation as far as carbohydrates are concerned by the way of a cycle of conversions known as Cori cycle. 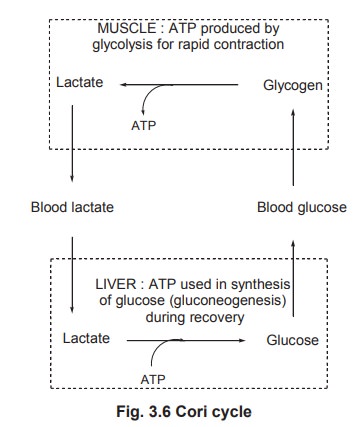 In this cycle liver glycogen may be converted into muscle glycogen and vice versa and the major raw material of this cycle is lactate produced by the active skeletal muscles.

At the time of heavy muscular work or strenuous exercise, O2 supply is inadequate in active muscles but the muscles keep contracting to the maximum. Hence, glycogen stored up in the muscle is converted into lactic acid by glycogenolysis followed by anaerobic glycolysis and thus lactate gets accumulated in the muscle. Muscle tissue lacks the enzyme glucose 6-phosphatase hence it is incapable of synthesizing glucose from lactic acid and the conversion take place only in the liver.

Lactate diffuses out of the muscle and enters the liver through blood. In the liver lactate is oxidised to pyruvate which undergoes the process of gluconeogenesis resulting in the resynthesis of glucose. The glycogen may be once again converted to glucose (glycogenolysis) and may be recycled to the muscle through the blood. The process of gluconeogenesis completes the cycle by converting glucose once again to muscle glycogen.