For more than 40 years, Li+ has been used to treat ma-nia. While it is relatively inert in individuals without a mood disorder, lithium carbonate is effective in 60 to 80% of all acute manic episodes within 5 to 21 days of beginning treatment.

For more than 40 years, Li+ has been used to treat ma-nia. While it is relatively inert in individuals without a mood disorder, lithium carbonate is effective in 60 to 80% of all acute manic episodes within 5 to 21 days of beginning treatment. Because of its delayed onset of ac-tion in the manic patient, Li+ is often used in conjunc-tion with low doses of high-potency anxiolytics (e.g., lo-razepam) and antipsychotics (e.g. haloperidol) to stabilize the behavior of the patient. Over time, in-creased therapeutic responses to Li+ allow for a gradual reduction in the amount of anxiolytic or neuroleptic re-quired, so that eventually Li+ is the sole agent used to maintain control of the mood disturbance.

In addition to its acute actions, Li+ can reduce the frequency of manic or depressive episodes in the bipolar patient and therefore is considered a mood-stabilizing agent. Accordingly, patients with bipolar disorder are often maintained on low stabilizing doses of Li+ indefi-nitely as a prophylaxis to future mood disturbances. Antidepressant medications are required in addition to Li+ for the treatment of breakthrough depression.

Lithium is a monovalent cation that can replace NA+ in some biological processes. It can be argued that compe-tition by Li+ for active NA+ sites may lead to altered neuronal functions that may account for its antimanic and mood-stabilizing actions. In this regard, the failure of Li+ to maintain a normal membrane potential be-cause of its lower affinity for the NA+ pump has been demonstrated. However, this action of Li+ would not explain its relatively selective effects on the CNS, spar-ing comparable excitable tissues (e.g. cardiac muscle) in the periphery. Moreover, an action on membrane polar-ity would be so general that the entire pool of brain neurons would be affected by Li+ . It seems more rea-sonable that Li+ produces its psychotropic actions by perturbation of molecular events common to a few CNS synapses that might have been disturbed during the course of the manic-depressive illness.

Recently, attention has focused on the actions of Li+ on receptor-mediated second-messenger signaling sys-tems of the brain. In this regard, interactions between Li+ and guanine nucleotide (GTP) binding proteins (G proteins) have been the target of many studies, since G proteins play a pivotal role in the function of many sec-ond-messenger signaling systems. Lithium is capable of altering G-protein function. It can diminish the cou-pling between the receptor recognition site and the G protein. The molecular mechanism involves the compe-tition for Mg sites on the G protein, which are essen-tial for GTP binding. Guanine nucleotide activates the G protein. Accordingly, in the presence of Li+ , receptor-mediated activation of these G proteins is attenuated. This action of Li+ has been selectively demonstrated for G proteins associated with β-adrenoceptors and M1 muscarinic receptors of the CNS (Fig. 33.4). 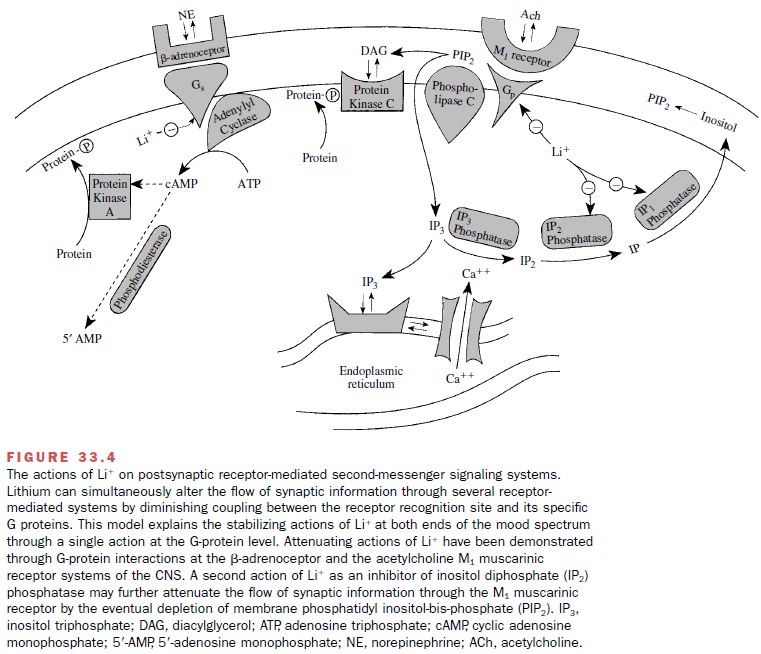 While it is not possible at present to assign a thera-peutic role to this action of Li+ , it is a step toward ex-plaining the stabilizing actions of this drug. Since sev-eral neurotransmitter receptors share common G protein–regulated second-messenger signaling systems, Li+ could simultaneously correct the alterations at indi-vidual synapses associated with depression and mania by a single action on the function of specific G proteins.

An additional action of Li+ is interruption of the phosphatidylinositide cycle through an inhibitory action on inositol phosphate metabolism. By this mechanism, depletion of membrane inositol and the phosphoinosi-tide-derived second-messenger products diacylglycerol and inositol triphosphate ultimately reduces signaling through receptor systems dependent on the formation of these products. It is presently unclear to what extent inhibition of inositol phosphate metabolism contributes to the therapeutic properties of Li+ in bipolar patients.

Lithium is readily absorbed from the gastrointestinal tract, reaching a peak plasma level in 2 to 4 hours. Distribution occurs throughout the extracellular fluid with no evidence of protein binding. Passage through the blood-brain barrier is limited, so that cerebrospinal fluid levels are 50% of plasma levels at steady state.

The elimination half-life of Li+ is estimated at 24 hours, and more than 90% of the dose of Li+ is excreted into the urine. Renal clearance, however, is only 20%, since Li+ is actively reabsorbed in the proximal tubule at sites normally used for the conservation of NA+ . Thus, competition between Li+ and NA+ for uptake sites can alter the elimination of Li+ and its concentration in to-tal body water. NA+ loading enhances Li+ clearance, while NA+ depletion promotes Li+ retention. This im-portant relationship explains the appearance of Li+ tox-icity (discussed later) associated with diet (low NA+ ), drugs (diuretics), medical conditions (diarrhea), or physical activities (those that induce sweating) that de-plete the body of NA+ .

The elimination rate of Li+ from the body is vari-able. It is quite rapid during the first 10 hours after in-gestion, and this period accounts for about 40% of the total Li+ excretion. However, the remaining portion of the Li+ dose is excreted very slowly over 14 days. Because of this biphasic elimination rate, clinically use-ful serum Li+ concentrations are usually determined 12 hours after the last dose. This period assures a relatively accurate reflection of the Li+ concentration, since it is beyond the most variable portion (rapid elimination phase) of the Li+ elimination profile.

The frequency and severity of adverse reactions associ-ated with Li+ therapy are directly related to serum lev- els. Since Li+ has a low therapeutic index (approxi-mately 3) and a narrow therapeutic window (0.5–1.5 mEq/L), the frequent measurement of serum steady-state concentrations is standard practice in the treat-ment of bipolar patients.

Adverse effects sometimes seen during chronic maintenance of bipolar patients with Li+ include hy-pothyroidism (approximately 5%) and nephrogenic dia- betes insipidus. Both conditions are readily reversible by discontinuation of Li+ . Routine laboratory monitoring includes TSH (thyroid-stimulating hormone) and serum creatinine measurements to detect hypothyroidism and any change in renal capacity to clear the drug.

Several anticonvulsant medications have mood-stabi-lizing properties. Valproic acid and carbamazepine are the best studied to date. In 1995, valproic acid was ap-proved by the FDA for treatment of acute mania and is now considered a first-line agent. Other anticonvul-sants under investigation include lamotrigine and top-iramate.