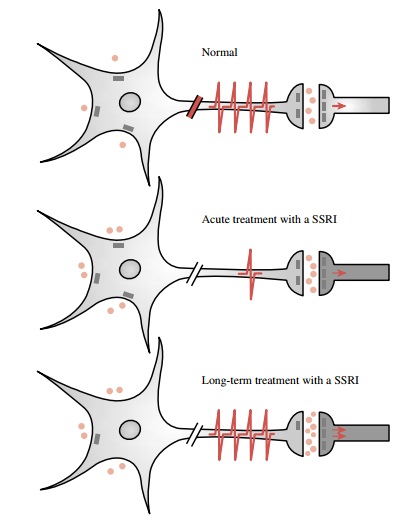 In 1987, the FDA approved the drug fluoxetine (Prozac) for use in the treatment of major depression.

In 1987, the FDA approved the drug fluoxetine (Prozac) for use in the treatment of major depression. Fluoxetine belongs to a class of agents referred to as selective sero-tonin reuptake inhibitors (SSRIs). The SSRIs now in-clude sertraline (Zoloft), fluvoxamine (Luvox), paroxe-tine (Paxil), and citalopram (Celexa).

With the introduction of the SSRIs, the safety and tolerability of antidepressants improved remarkably. As a class, these medications have little or no affinity for cholinergic, β-adrenergic or histamine receptors and do not interfere with cardiac conduction. They are well tol-erated by patients with heart disease and by the elderly, who are especially sensitive to the anticholinergic and orthostatic effects of the tricyclic antidepressant agents (TCAs) and monoamine oxidase inhibitors (MAOIs).

The high degree of selectivity of SSRIs for the nerve terminal serotonin reuptake system has supported the hypothesis that these agents produce their therapeutic action through an ability to modulate serotonin neuro-transmission in the brain. Chronic studies in animals have provided evidence for a cascade of altered synap-tic events, beginning with inhibition of 5-hydroxytrypta-mine (5-HT) neuronal reuptake (Fig. 33.1). Increased 5-HT levels activate 5-HT1A autoreceptors and result in a decrease in neuronal firing. Desensitization of this re-ceptor results in enhanced serotonin release. The termi-nal 5-HT1B autoreceptors normally inhibiting release of serotonin also become desensitized. These events, trig-gered by a sustained inhibition of the nerve terminal serotonin reuptake system, ultimately cause a potentia-tion of serotonin neurotransmission at central synaptic sites.

The development of these synaptic events shares the time frame of the delayed appearance of the thera-peutic benefit of these agents in depression.

With initiation of therapy with an SSRI, some pa-tients describe anxiety or agitation. This can usually be overcome by reducing the dose and titrating upward more slowly. Insomnia can be a persistent activating side effect that can limit therapy or require the addition of a sedating agent at bedtime. Nausea and loose stools are a frequent side effect and may be lessened by taking the medication with food. As many as one-third of pa-tients taking SSRIs may complain of sexual dysfunc-tion, including decreased libido, delayed ejaculation, and anorgasmia. The SSRIs tend to be weight neutral with the exception of paroxetine (Paxil), which is asso-ciated with weight gain. No correlation has been made between plasma levels of the SSRIs and efficacy.

Fluoxetine (Prozac) is given in the morning because of its potential for being activating and causing insomnia. Food does not affect its systemic bioavailability and may actually lessen the nausea reported by some pa-tients. Fluoxetine is highly bound to serum proteins and may interact with other highly protein bound drugs. It is demethylated in the liver to form an active metabolite, norfluoxetine. Inactive metabolites are excreted by the kidney. Doses must be reduced in patients with liver dis-ease.

The slow elimination of fluoxetine and norfluoxe-tine lead to special clinical concerns when adjusting doses and discontinuing this medication. Steady state is not reached until 4 to 6 weeks, and similarly, complete elimination takes 4 to 6 weeks after discontinuation of the medication. A 4- to 6-week waiting period should be permitted before starting a medication with potential for an interaction with fluoxetine, such as a monoamine oxidase inhibitor (MAOI). Additionally, fluoxetine is a potent inhibitor of cytochrome P450 2D6 and can sig-nificantly elevate levels of drugs metabolized by this route. Thus, coadministration of drugs with a narrow therapeutic index, such as TCAs and type 1C antiar-rhythmics, including flecainide and propafenone, are a particular concern.

Sertraline (Zoloft) has an elimination half-life of 25 hours and can be administered once a day, usually in the morning to avoid insomnia. Sertraline undergoes exten-sive hepatic metabolism, and doses must be reduced in patients with liver disease. Sertraline may produce more gastrointestinal side effects, such as nausea and diar-rhea, than does fluoxetine and is generally thought to be less activating than fluoxetine. It is highly bound to serum proteins (98%) and may alter plasma protein binding of other medications. A 14-day washout period is recommended before starting a MAOI. Sertraline is a weak inhibitor of cytochrome P450 2D6. Intensive ther-apeutic drug monitoring is indicated when combining sertraline with drugs metabolized by this route that have a narrow therapeutic index, such as the TCAs and the type 1C antiarrhythmics propafenone, encainide, and flecainide.

Paroxetine (Paxil) has an elimination half-life of 21 hours and is also highly bound to plasma proteins, so it requires special attention when administered with drugs such as warfarin. Paroxetine is a potent inhibitor of the cytochrome P450 2D6 isoenzyme and can raise the plasma levels of drugs metabolized via this route. Of particular concern are drugs with a narrow therapeutic index, such as TCAs and the type 1C antiarrhythmics flecainide, propafenone, and encainide. Additionally, paroxetine itself is metabolized by this enzyme and in-hibits its own metabolism, leading to nonlinear kinetics. Weight gain is higher with paroxetine than with the other SSRIs, and it tends to be more sedating, presum-ably because of its potential anticholinergic effects. Additionally, patients have had difficulty with abrupt discontinuation with this agent, reporting a flulike syn-drome; this symptom can be avoided by tapering the medication.

Citalopram (Celexa) has an elimination half-life of 35 hours and is 80% bound to plasma proteins. Of all of the SSRIs it has the least effect on the cytochrome P450 sys-tem and has the most favorable profile regarding drug–drug interactions.