Seven TCA drugs are available in the United States for treatment of major depression.

In the late 1950s, imipramine was noted to be effective for the symptomatic treatment of depression. A number of chemical congeners of imipramine have been synthe-sized and tested for antidepressant properties; they are collectively known as TCAs. The TCAs are no longer considered first-line agents in the treatment of depres-sion because of their prominent side effects and the need to monitor drug blood levels to avoid toxicity.

Clomipramine (Anafranil) also a member of the tri-cyclic family, possesses similar pharmacology and anti-depressant efficacy. This agent, however, has Food and Drug (FDA) approval only for use in the treatment of obsessive-compulsive disorder and is not included in this discussion of antidepressant drugs.

Maprotiline (Ludiomil) and amoxapine (Asendin) are heterocyclic antidepressant agents that are not members of the tricyclic family. However, their pharma-cology is so similar to that of the tricyclic amines that they are included for discussion purposes with this class of agents. Desipramine and nortriptyline are major metabolites of imipramine and amitriptyline, respec-tively.

The precise molecular mechanism responsible for the antidepressant action of the TCA drugs is unknown, al-though a number of hypotheses have been generated. Many of these involve alterations in neurotransmission of norepinephrine or serotonin or both.

β-Adrenoceptor down-regulation at central nora-drenergic synapses is one popular theory used to ex-plain the antidepressant properties of TCA drugs and other antidepressants. This theory focuses on a cascade of adaptive changes at the noradrenergic synapse that appears to be triggered by inhibition of norepinephrine neuronal reuptake by TCA drugs (Fig. 33.2). Subsensi-tivity in the β-adrenoceptor–coupled adenylyl cyclase system and associated reductions in  β-adrenoceptor density appear to be common features of the antide-pressants and of electroconvulsant treatment. 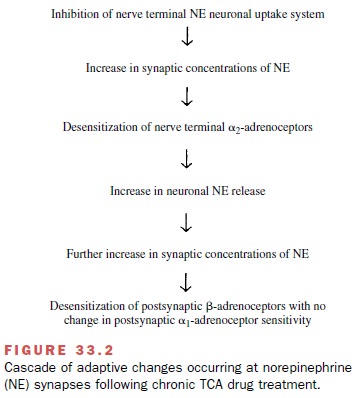 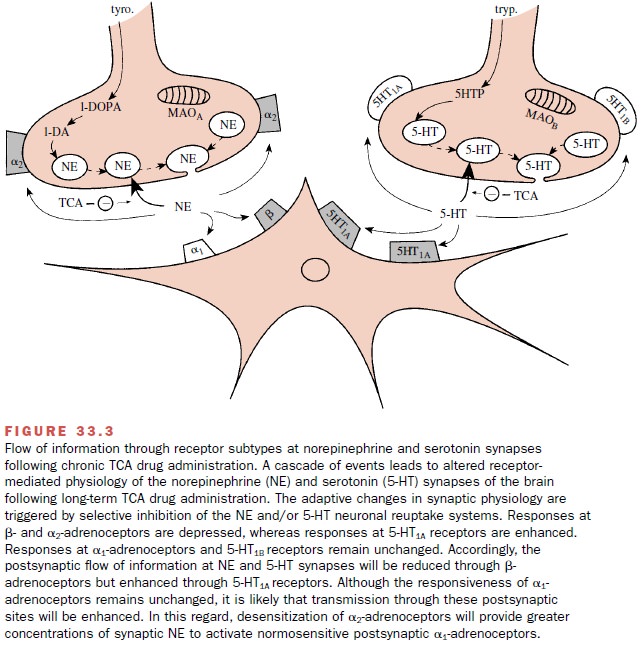 While much emphasis has been placed on alter-ations in noradrenergic neurotransmission, TCA drugs are not without effect on serotonin (5-HT) neurotrans-mission. Long-term studies with TCA drugs in animals have demonstrated postsynaptic supersensitivity to serotonin (5-HT1A) receptor agonists at serotonin synapses, with an associated enhancement of serotoner-gic neurotransmission. The sensitization to 5-HT1A ago-nists is mediated in part by an increase in the density of postsynaptic 5-HT1A receptors. Enhancement of trans- mission through 5-HT1A receptors appears to be a com-mon phenomenon after chronic administration of all clinically effective antidepressants and electroconvul-sive treatment. The occurrence of this 5-HT1A supersen-sitivity parallels the delayed onset of the therapeutic ac-tions of these agents (2–3 weeks). These observations lend strong support to the hypothesis that enhanced serotonergic neurotransmission is required for the ther-apeutic benefit from TCA drugs.

It is likely that TCA drugs produce their therapeutic benefits by acting at both serotonin and norepinephrine synapses. The literature also supports the notion of an interdependence of these two monoamine systems in the treatment of depression. The time-dependent changes in the flow of synaptic information through in-dividual receptor subtypes within the norepinephrine and serotonin synapses following chronic TCA adminis-tration are summarized in Figure 33.3.

The TCA drugs are well absorbed from the gastroin-testinal tract, are extremely lipid soluble, and bind ex-tensively to plasma proteins. Their half-lives range from 8 to 89 hours (Table 33.1). Several days to weeks are re-quired both to achieve steady-state serum levels and for complete elimination of these agents from the body. Long half-lives make most of these agents amenable to dosing once a day, generally at bedtime. 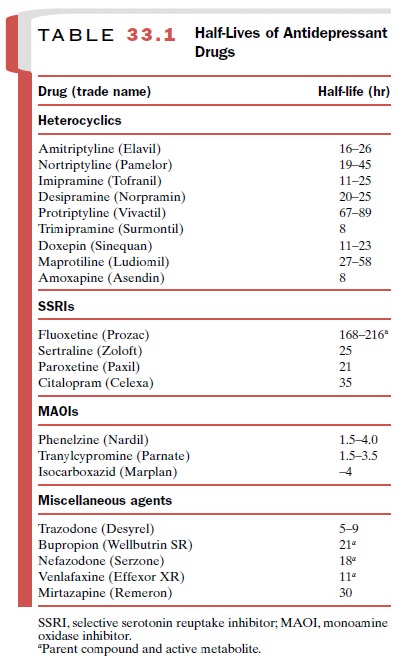 Drug inactivation generally occurs through oxida-tive metabolism by hepatic microsomal enzymes. Tertiary amines are converted to secondary amines, which generally possess biological activity and are fre-quently in serum at levels equal to or greater than that of the parent tertiary amine. A second route of inacti-vation includes conjugation of hydroxylated metabo-lites with glucuronic acid.

The TCA drugs have lost their place as first-line therapy for depression because of their bothersome side effects (Table 33.2) at therapeutic doses and lethal effects in toxic doses. In addition to their presynaptic effects on the neuronal uptake of norepinephrine and serotonin, they block several postsynaptic receptors. They are po-tent cholinergic muscarinic receptor antagonists, result-ing in symptoms such as dry mouth, constipation, tachy-cardia, blurred vision and urinary retention. Blockade of histamine receptors (H1) often results in sedation and weight gain. Antagonism of α1-adrenoceptors in the vas-culature can cause orthostatic hypotension.

TCA drugs have potent membrane-stabilizing prop-erties similar to those of quinidine. Conduction is slowed throughout the heart, and serious ventricular ar-rhythmias may develop in patients with preexisting con-duction abnormalities at therapeutic doses and in all pa-tients at toxic doses. At therapeutic doses, the TCA drugs lower the seizure threshold and at toxic doses can cause life-threatening seizures. Maprotiline has a greater potential for reducing the seizure threshold and should not be used in patients with a seizure disorder. Amoxapine has dopamine receptor antagonist proper-ties  and can induce extrapyramidal side effects, gynecomastia, lactation, and neuroleptic malignant syndrome. To increase tolerance to the anti-cholinergic and orthostatic effects of the TCA drugs, the dose is usually titrated with increasing increments over the first few weeks of therapy.

Multiple drug interactions can occur with the TCA drugs. Because of their high degree of binding to plasma proteins, competition for binding sites can exist be-tween TCAs and phenytoin, aspirin, phenothiazines, and other agents that also display avid plasma protein-binding characteristics. Elevation in the serum level of TCAs (with corresponding toxicity) can occur following the administration of one of these second drugs. Elevations in the serum TCA level also can occur fol-lowing inhibition of hepatic TCA metabolism by an-tipsychotics, methylphenidate, oral contraceptives, and some SSRIs.

Tricyclic antidepressant drugs can prevent the action of antihypertensive drugs, such as guanethidine and clonidine. This antagonistic action is related to the pri-mary (inhibition of neuronal reuptake) and secondary (adaptive changes) effects of TCA drugs at noradrener-gic synapses. A more serious but rare interaction exists between TCA drugs and MAOIs. While both classes of drugs are effective in the treatment of major depres-sion, simultaneous administration of a drug from each class can result in severe CNS toxicity (hyperpyrexia, convulsions, and coma). In TCA-resistant patients, it is advisable to discontinue the TCA drug for 2 to 3 weeks before initiation of a MAOI agent. Finally, TCA drugs potentiate the sedative effects of alcohol, and patients must be cautioned about this interaction.

Safe and effective use of the TCA drugs requires moni-toring of serum levels. The importance of this monitor-ing is based on the relatively narrow range between therapeutic and toxic doses (therapeutic index of 3) of each agent. While annoying side effects (sedation, dry mouth, constipation) begin to occur at subtherapeutic serum concentrations, life-threatening cardiac and CNS effects develop in a dose dependent fashion above serum levels of 500 ng/mL. The metabolism and elimi-nation rates vary 10- to 30-fold among individuals tak-ing TCA drugs. For this reason, it is estimated that only 50% of the patients receiving a standard dose of a TCA drug would achieve an optimal therapeutic serum con-centration. Of additional concern, 3 to 5% of patients will be deficient in hepatic enzymes that metabolize the TCA drugs and may develop life-threatening serum lev-els on standard doses. Therefore, steady-state serum lev-els of TCA drugs (drawn 10 to 12 hours after the last dose) are monitored to avoid toxicity, monitor compli-ance, and optimize the therapeutic response.