Transport is a system in which passengers and goods are carried from one place to another. Transport system is considered as the lifeline of a country.

Transport is a system in which passengers and goods are carried from one place to another. Transport system is considered as the lifeline of a country. Earlier man travelled on foot or used animals for transport. With the discovery of wheel, transport was made easier and gradually different means of transport were developed. There are three major means of transport in the world. 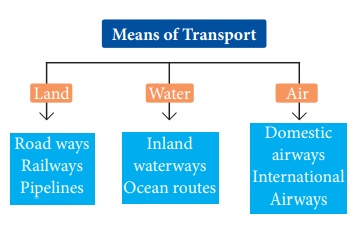 Roads play an important role in carrying goods and passengers for short, medium and long distances. It is highly suitable for short distance services. It is comparatively easy and cheap to construct and maintain roads. Road transport system can establish easy contact between farms, fields, factories and markets and can provide door to door transport services. Roads are the most universal mode of transport. Indian roads are cost efficient. It is used by all sections of people in the society.

Shershah suri built the shahi (Royal) road to strengthen and consolidate his empire from the Indus valley to the Sonar valley in Bengal. This road from Kolkata to Peshawar was renamed as Grand Trunk (GT) road during the British period. At present, it extends from Amristar to Kolkata. 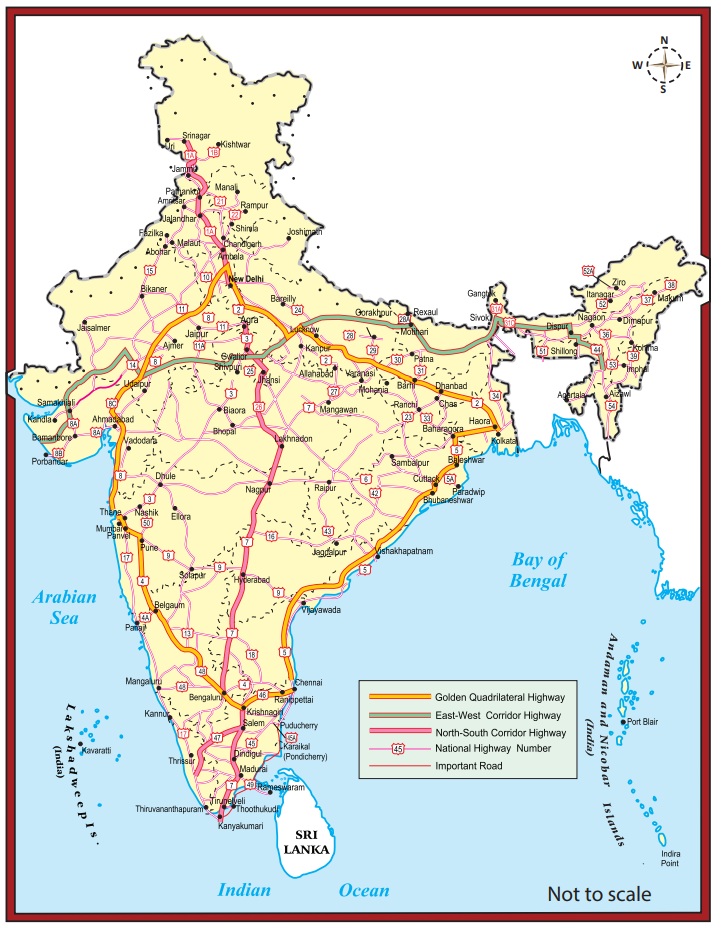 Classification of Roads in India

National Highways form the most important system of road transportation in India. These highways are running through length and breadth of the country connecting capitals of states, major Ports, rail junctions, industrial and tourist centres. Ministry of Road Transport and Highways of India, is responsible for the development and maintenance of National Highways in India. The longest National highway is NH- 44 which runs from Varanasi in Uttar Pradesh to Kanniyakumari in Tamil Nadu covering a distance of 2369 km. The shortest national highway is NH- 47A, which runs from Ernakulum to Kochi port (Willington Island) covering a distance of 6 km.

National Highways Authority of India (NHAI) was established in 1995. It is an autonomous body under the Ministry of Surface Transport. 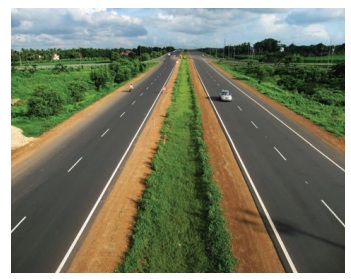 The state highways are usually roads that link important cities, towns and district headquarters within the state and connect them with national highways or highways of neighbouring states. These roads are administered and financed by state governments.

District Roads provide connectivity between the district and taluk headquarters with the state highways and national highways. District Roads are constructed and maintained by the Public Works Department of the states.

These roads are vital for providing links in the rural areas. It links the different villages with their neighbouring towns. They are maintained by Village Panchayats.

These are the roads of strategic importance in border areas. They are constructed and maintained by Border Roads Organization. It was established in 1960 for the development of the roads of strategic importance in the northern and northeastern border areas. Border Roads Organization has constructed world’s highest road joining Chandigarh and Leh in Ladakh. This road runs at an average altitude of 4,270 meters.

What are the highlights and benefits of the Golden Quadrilateral Highways?

North-South corridor aims at connecting Srinagar in Jammu and Kashmir with Kaniyakumari in Tamil Nadu (including Kochi-Salem Spur) with 4,076km long road.

The East-West corridor has been planned to connect Silchar in Assam with the port town of Porbandar in Gujarat with 3,640km of road length. The two corridors intersect at Jhansi.

These are multi-lane good quality highways for high speed traffic. Some of the important expressways are; (i)Mumbai-Pune Road, (ii) Kolkata-Dumdum Airport road (iii) Durgapur-Kolkata road and (iv) Yamuna expressway between Delhi and Agra. 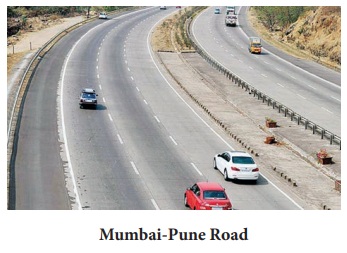 These are the roads that link India with neighbouring countries for promoting harmonious relationship with them. These highways have been constructed with an aid from world bank under an agreement with the Economic and Social Commission for Asia-Pacific (ESCAP). These roads connect important highways of India with those of the neighbouring countries such as Pakistan, Nepal, Bhutan, Bangladesh and Myanmar.

Indian railway system is the main artery of the country’s inland transport. Railways cater to the needs of large scale movement of traffic, both for freight and passenger, thereby contributing to economic growth. Railways are considered as the backbone of the surface transport system of India. It promotes national integration by bringing people together. It also promotes trade, tourism, education etc. Railways help in the commercialization of the agriculture sector by facilitating the bulky movement of perishable goods. Its role in transporting raw materials to industries and finished goods to markets is invaluable. Indian railways network is the largest in Asia and second largest in the world.

For operations and management, the Indian Railways is organized into 17 zones. 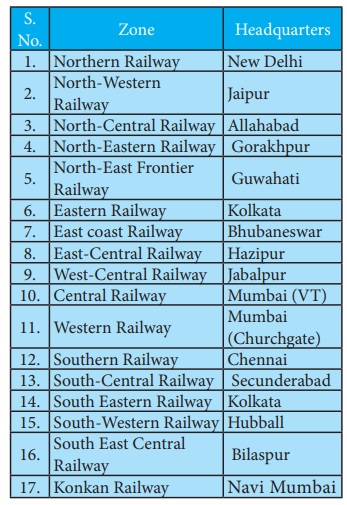 On the basis of width of the track, the Indian railways fall under four categories.

The first sub-urban railway was started in 1925 in Mumbai.

Gatiman Express is the fastest operational train in India. This train connects New Delhi and

There are 8 cities with metro rail connectivity in India. They are Kolkata (West Bengal), Chennai (Tamil Nadu), Delhi, Bengaluru (Karnataka), Gurgaon (Haryana), Mumbai (Maharashtra), Jaipur (Rajasthan) and Kochi (Kerala). The metro in Kolkata is the first one in India. It is also called as Mass Rapid Transit System (MRTS). As of September 2018, India has 507 km of operational metro lines and 381 stations

The state of Meghalaya has no railway network. 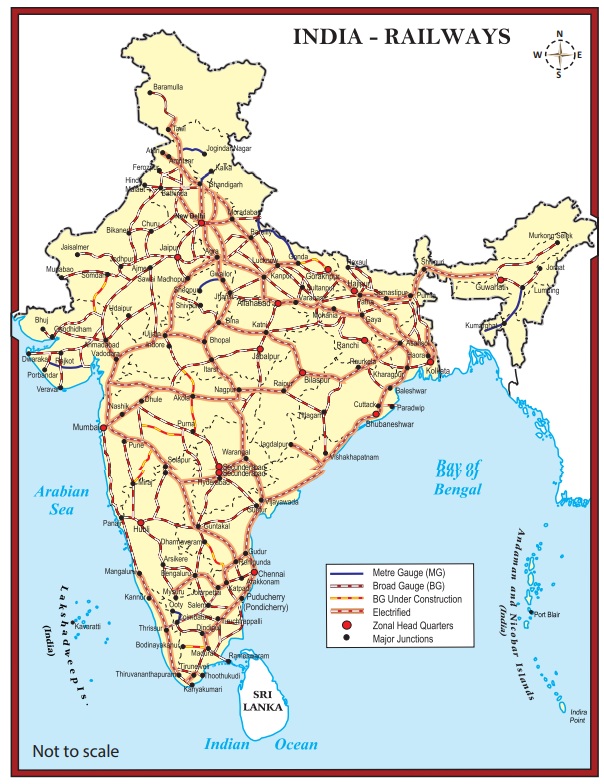 Pipelines provided a very convenient mode of transport to connect oil and natural gas fields, refineries and to the markets. In the past, these were used to transport water to cities and industries. Now solids can also be transported through a pipeline when converted into slurry. The initial cost of laying pipeline is high but subsequent running cost is minimum. It can be laid through difficult terrain as well as under water. It ensures steady supply of goods and reduces the transshipment losses and delays.

Oil field in upper Assam to Kanpur, from Salaya in Gujarat to Jalandhar in Punjab and gas pipeline from the Hazira in Gujarat ot Jagadispur in Uttar Pradesh.

A waterway is an important mode of transport for both passenger and cargo traffic in India. It is the oldest and also the cheapest means of transport and most suitable for carrying heavy and bulky materials from one country to another. It is a fuel-efficient and eco-friendly mode of transport. The water transport is of two types- 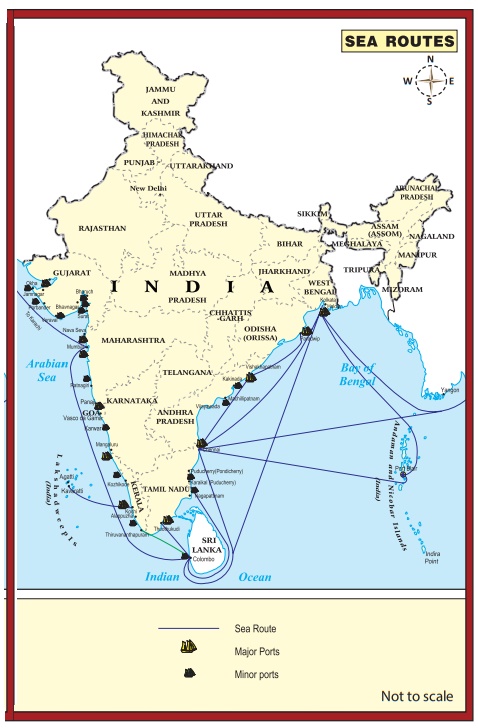 India has an extensive network of inland waterways in the form of rivers, canals, lakes and backwaters. It depends upon the depth and width of the waterways and the continuity of the water flow. For the development, maintenance and regulation of national waterways in the country, the Inland water ways Authority was setup in 1986.

The major national waterways are:

It extends between Haldia and Allahabad, measures 1620 km and includes the stretches of the Ganga-Bhagirathi-Hooghly river system.

This waterway includes the stretch of the Brahmaputra river between Dhubri and Sadiya a distance of 891 km.

This waterway extends between Kollam and Kottapuram in the state of Kerala. It is the first national waterway in the country with 24 hour navigation facilities along its entire stretch of 205 km.

Oceanic routes play an important role in the transport sector of India’s economy. About 95% of India’s foreign trade by volume and 70 percent by value moves through ocean routes.

Coastal shipping plays an important role in transport of bulk goods in India. Shipping is not only the most economical mode of transport, it is also an environment friendly mode. The sea and oceanic routes are mainly used for international trade and are connected through ports. There are 13 major and 200 minor or intermediate ports in India. The major ports are administered by the Central Government and minor ports are managed and administered by various state governments. The major ports on the east coast are Kolkata (including Haldia Dock), Paradip, Visakhapatnam, Chennai, Ennore and Tuticorin. The major ports on the west coast are Kandla, Mumbai, Nhava Seva (Jawaharlal Nehru Port), New Mangalore, Marmagao and Kochi.

Airways are the quickest, costliest, most modern and comfortable means of transport, Air transport facilitates connectivity on a national, regional and international scale. It has made accessibility easier by connecting difficult terrains like high mountains and sandy deserts. It carries passengers, freight and mail. Air transport plays a key role in times of emergency as well as in the event of natural and man-made calamities like floods, epidemics and wars.

Air transport in India made a beginning on 18th February, 1918 when Henry Piquet carried a mail from Allahabad to Naini. In 1953, eight different airlines which were in operation in the country were nationalised. 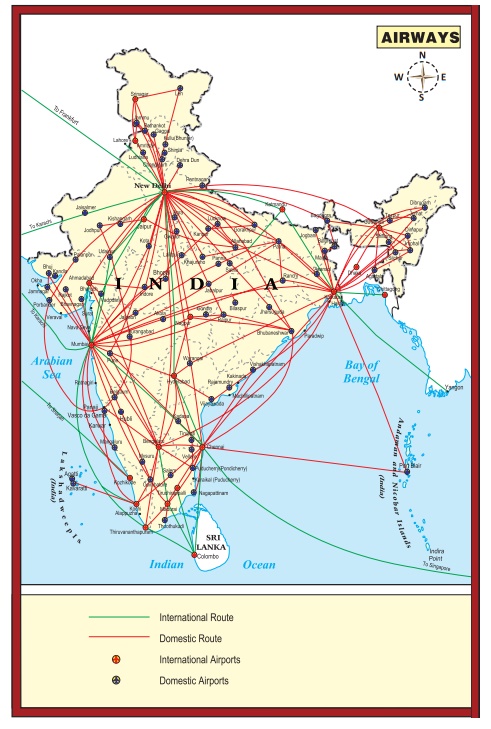 Hots: Why is air travel preferred in the north eastern states?

Pavan-Hans Helicopter Ltd has been providing Helicopter support services to the petroleum sector, including ONGC and oil India Ltd. It is a public sector company based in New Delhi. Its operations are based at the Juhu Aerodrome in Vile Parle (West) Mumbai. Pavan-Hans is a Mini Ratna–I category public sector undertaking. It often provides services to various state governments particularly north east India and Inter Island, Ferry services in Andaman & Nicobar Islands, services to Lakshadweep Island etc.,

Airports Authority of India (AAI) was constituted in 1995. It provides security to Indian Airports. AAI under the ministry of Civil Aviation is responsible for creating, upgrading, maintaining and managing civil aviation infrastructure in India.