The Indian postal network is the largest in the world with 1,55,000 post offices. Of these more than 1,39,000 post offices are located in rural areas. The postal service was opened to the public in the country in 1837. The first Indian postal stamp was issued in 1852 in Karachi. Collecting and delivering mail is the primary function of the department of posts. It introduced the Quick Mail Service in 1975. The Quick Mail Service functions on the basis of the system of PIN (Postal Index Number) code which was introduced in 1972. The premium products include the Money order, e-money order, Speed Post, Express Parcel Post, Business Post, Media Post, Satellite Post, Retail Post, Greeting Post, Data Post, Speed Net and Speed Passport Services.

India has one of the largest telecommunication networks in Asia. Apart from the urban areas more than two-thirds of the villages in India have already been covered with Subscriber Trunk Dialing (STD) telephone facility, while International communication can be made through ISD (International Subscriber Dialing). There is an uniform rate of STD facilities all over India. Telephone is a form of oral communication. It is considered very essential for the growth of commerce. It is the most preferred form as it provides instant communication. Mobile phone, fax and internet are the other personal communication used in the country.

Mass Communication enables millions of people to get the information at the same time. It is a great way to provide education as well as entertainment. It helps in creating awareness among the people regarding various national policies and programmes. The Mass Communication Systems can provide the information to people in two methods. They are Print Media and Electronic Media.

Electronic Media: Radio broadcasting in India was started in 1923 by the Radio club of Bombay. Since then it gained immense popularity and changed the social and cultural life of people. It was named as All India Radio (AIR) in 1936 and again it was renamed as Akashwani in 1957. It broadcasts a variety of programs related to information, education and entertainment. Special news bulletins are also broadcasted on special occasions like session of parliament and state legislatures.

Television broadcasting has emerged as the most effective audio-visual medium for disseminating information and educating the masses. Television network in India is known as Doordarshan (DD) which started Common National Program (CNP) services and it is extended to the backward and remote rural areas.

Internet (contraction of interconnected network) is the global system of interconnected computer networks that use the Internet protocol suite to link devices worldwide. Social media are interactive computer-mediated technologies that facilitate the creation and sharing of information, ideas, career interests and other forms of expression via virtual communities and networks.

Print Media: Newspapers are the most common but powerful means of communication come under print media. India has many newspapers which carry information on local, national and international events to the people.

The use of Satellite in getting a continuous and synoptic view of larger area has made this communication system very vital for the country. Satellite images are used for weather forecasting, monitoring of natural calamities, surveillance of border areas etc. The communication through satellites emerged as a new era in communication in our country after the establishment of Indian Space Research Organization (ISRO) in 1969. 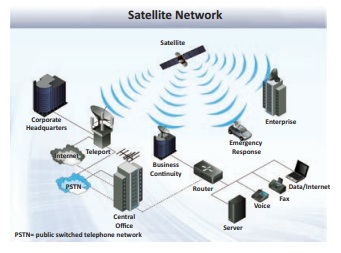 Satellite system in India can be grouped into two

The INSAT, established in 1983, is a multipurpose system for telecommunication, meteorological observation and for various other programs. The INSAT series are used for relaying signals to television, telephone, radio, mobile phone. It is also useful in weather detection, internet and military applications.