Transfer of living cells, tissues or organs from one part of the body to another or from one individual to another is known as transplantation.

Transfer of living cells, tissues or organs from one part of the body to another or from one individual to another is known as transplantation.

Transplantation is the only form of treatment for most end-stage organ failure. In clinical practice, transplantation is used to overcome a functional and anatomic deficit in the recipient. Transplantation of kidneys, hearts, livers, lungs, pancreas and bone marrow are widely done today.

• Auto grafting: The transfer of self tissue from one body site to another in the same individual

• Allografting: The transfer of organs or tissues from human to human

• Xenografting: The transfer of tissue from one species to another (Figure 11.11) 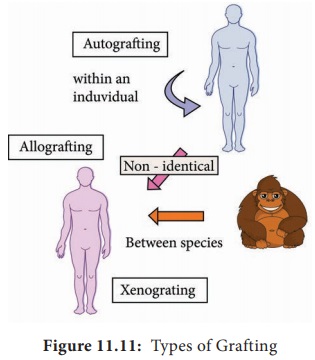 When transplantation is made between genetically identical individuals the graft survives and lives as healthy as it is in the original places. When the graft tissue remains alive, it is said to be accepted and the process is called graft acceptance.

• Acute rejection–Quick graft rejection. It is due to stimulation of thymocytes and B lymphocytes

• Hyperacute rejection–It is a very quick rejection. It is due to pre-existing humoral antibodies in the serum of the host as a result of presensitization with previous grafts.

• Insidious rejection–It is a secret rejection due to deposition of immune complex on the tissues like glomerulus membrane that can be demonstrated in kidney by immune fluorescence.

When tissue is implanted as graft, its antigen can pass into local lymph nodes of the host. The graft antigens then make contact with the lymphocytes of the host. Production of sensitized T cells and cytotoxic antibodies are produced in the host. This brings about graft rejection

When the graft is made between genetically different individuals, the graft gets blood supply from the host and it appears to be normal for the first 3 days. But on the 5th day, sensitized T cells, macrophages and a few plasma cells invade the graft. Inflammation starts in the graft. This leads to necrosis. It is similar to the primary immune response to an antigen.

When a graft is implanted in an individual who has already rejected a graft is second set rejection. This is similar to the secondary immune response of our body.

The 1st set of rejection of allograft is brought about mainly by CMI response. In this process the cells involved in the cytotoxic mediated immunity involves. On stimulation of these cells interferon causes the lysis of the graft.

The 2nd set rejection of graft is brought about mainly by HMI response. This is one of the hyperacute rejection brought about by the antibodies. Complement, macrophages, mast cells, platelets, B cells bring about this reaction.

• Graft remains inside the host and the host should not reject the graft.

• The graft should have immune competent T cells.

• The transplantation antigens of the host should be different from that of the graft.

A transplanted heart usually beats slightly faster than normal because the heart nerves are cut during surgery.

Mechanism of the graft rejection

How to prevent graft rejection?

Before transplantation the following things should be done to avoid graft rejection.

• HLA typing should be done

• Immuno suppressive drugs should be administered

• Suitable donor should be chosen