Father of Immunology is Edward Jenner. He produced the vaccine for small pox from cow pox virus.

Father of Immunology is Edward Jenner. He produced the vaccine for small pox from cow pox virus. Vaccine is a substance that is introduced into the body to prevent the disease produced by certain pathogens. Vaccines consist of dead pathogens or live but attenuated (artificially weakened) organisms.

Immunization programmes and the development of new vaccines play an important role in protecting individuals against illness. Vaccination works by safely exposing individuals to a specific pathogenic microbe, artificially increasing their immunity to it.

Vaccines are made from

• Live micro-organisms that have been ‘treated’ so that they are weakened (attenuated) and are unable to cause disease.

• Live attenuated vaccines:  These vaccines contain modified strains of a pathogen that have been weakened but are able to multiply within the body and remain antigenic enough to induce a strong immune response. Example: Oral Polio vaccine

• Heterologous vaccine: These are a group of live attenuated vaccines produced from the strains that are pathogenic in animals and not in humans. It is a vaccine that confers protective immunity against a pathogen that shares cross-reacting antigens with the microorganisms in the vaccine. Example: Cow pox virus that protects against small pox in humans .

• Killed inactivated vaccines: These groups of vaccine are produced either by killing or inactivating the bacteria or virus by chemical treatment or heat. Example:; Polio virus

• Sub unit vaccine: The antigenic determinant / epitope (the very specific part of the microbe) is used to prepare the vaccine.. DNA Vaccines: When the genes for microbe’s antigens are introduced into the body some cells will take up the DNA. The DNA then instructs those cells to make the antigen molecules. The cells secrete the antigens and display them on their surfaces. The body’s own cells become vaccine generating factorie

Immunization is of two types:

• Passive immunization is produced without challenging the immune system of the body. It is done by administration of serum or gamma globulins from a person who is already immunized to a non- immune person.

• Passive immunization is the administration of preformed antibodies either intravenously or intramuscularly.

• It is used to provide rapid protection in certain infections such as diphtheria or tetanus or in the event of accidental exposure to certain pathogens such as hepatitis B.

• It is also used to provide protection in immune compromised individuals.

Passive natural immunization - acquired from the mother before and after birth. Before birth, immunity is transferred from mother to the fetus in the form of maternal antibodies through placenta. After birth, the antibodies (Ig A) are transferred through breast milk (Table 11.2). 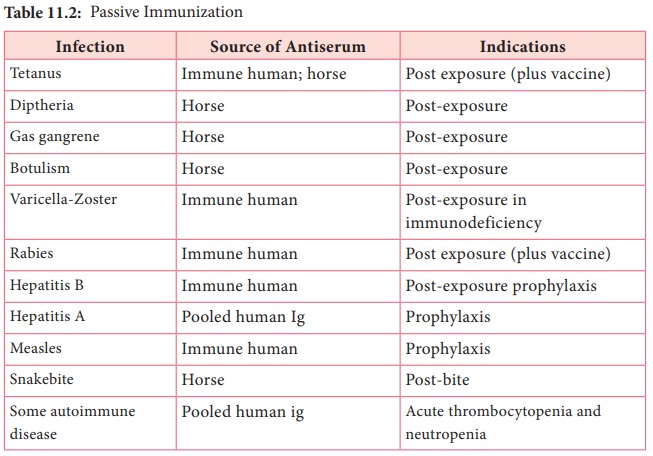 Active immunization is the administration of vaccines containing microbial products with or without adjuvants in order to obtain long term immunological protection against the offending microbe.

At present the normal route of vaccination in most instances is either intramuscular or subcutaneous.

Oral immunization is the method of choice for polio and Salmonella typhi vaccines. However, there is an increasing awareness that this route of immunization may be the best for most immunizations since nearly all infectious agents gain entrance through the mucosal surfaces.

Active natural immunization involves activation of immune system in the body to produce antibodies. It is achieved in both clinical and subclinical infections.

Active artificial immunization is achieved by the administration of vaccines or toxoids. 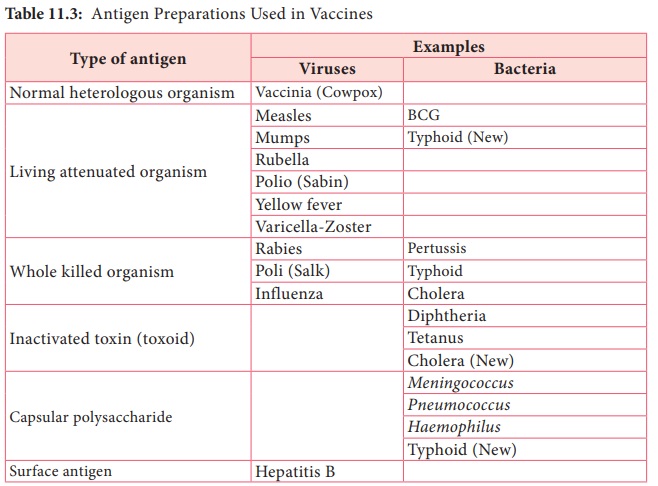 Nonliving vaccines, especially those consisting of small molecules require the inclusion of agents to enhance their effectiveness.

These adjuvants include microbial, synthetic and endogenous preparations having adjuvant activity, but at present only aluminium or calcium salts are generally used in humans.