A transformer transfers electrical energy between two circuits. It usually consists of two wire coils wrapped around a core. These coils are called primary and secondary windings.

A transformer transfers electrical energy between two circuits. It usually consists of two wire coils wrapped around a core. These coils are called primary and secondary windings. Energy is transferred by mutual induction caused by a changing electromagnetic field. If the coils have different number of turns around the core, the voltage induced in the secondary coil will be different to the first. 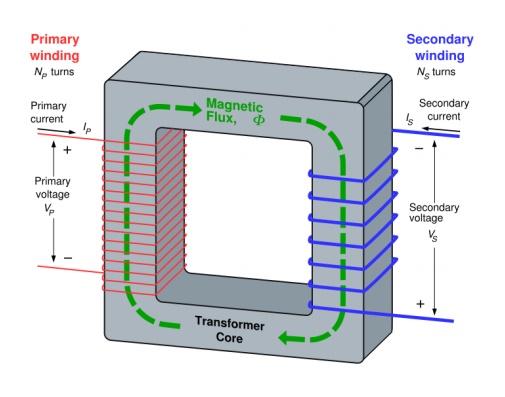 The device which is used to stepping up or stepping down of voltages is known as transformer.

For transformer working principle and its uses:

The physical limitations of the practical transformer may be brought together as an equivalent circuit model built around an ideal lossless transformer. Power loss in the windings is current-dependent and is represented as in-series resistances RP and RS. Flux leakage results in a fraction of the applied voltage dropped without contributing to the mutual coupling, and thus can be modelled as reactance of each leakage inductance XP and XS in series with the perfectly coupled region.

A core with finite permeability requires a magnetizing current IM to maintain the mutual flux in the core. The magnetizing current is in phase with the flux; saturation effects cause the relationship between the two to be non-linear, but for simplicity this effect tends to be ignored in most circuit equivalents. With a sinusoidal supply, the core flux lags the induced EMF by 90° and this effect can be modeled as a magnetizing reactance (reactance of an effective inductance) XM in parallel with the core loss component. RC and XM are sometimes together termed the magnetizing branch of the model. If the secondary winding is made open-circuit, the current I0 taken by the magnetizing branch represents the transformer's no-load current.

Transformer equivalent circuit, with secondary impedances referred to the primary side

The resulting model is sometimes termed the "exact equivalent circuit", though it retains a number of approximations, such as an assumption of linearity. Analysis may be simplified by moving the magnetizing branch to the left of the primary impedance, an implicit assumption that the magnetizing current is low, and then summing primary and referred secondary impedances, resulting in so-called equivalent impedance.

Transformers are frequently used in power applications to interconnect systems operating at different voltage classes, for example 138 kV to 66 kV for transmission. Another application is in industry to adapt machinery built (for example) for 480 V supplies to operate on a 600 V supply. They are also often used for providing conversions between the two common domestic mains voltage bands in the world (100-130 and 200-250). The links between the UK 400kV and 275kV 'Super Grid' networks are normally three phase autotransformers with taps at the common neutral end.

On long rural power distribution lines, special autotransformers with automatic tap-changing equipment are inserted as voltage regulators, so that customers at the far end of the line receive the same average voltage as those closer to the source. The variable ratio of the autotransformer compensates for the voltage drop Voltage drop along the line.

In audio applications, tapped autotransformers are used to adapt speakers to constant-voltage audio distribution systems, and for impedance matching such as between a low-impedance microphone and a high-impedance amplifier input.