An induction motor (or asynchronous motor) is a type of alternating current motor where power is supplied to the rotor by means of electromagnetic induction.

An induction motor (or asynchronous motor) is a type of alternating current motor where power is supplied to the rotor by means of electromagnetic induction.

An AC motor is an electric motor that is driven by an alternating current. It consists of two basic parts, an outside stationary stator having coils supplied with alternating current to produce a rotating magnetic field, and an inside rotor attached to the output shaft that is given a torque by the rotating field.

There are two types of AC motors, depending on the type of rotor used. The first is the synchronous motor, which rotates exactly at the supply frequency or a submultiple of the supply frequency. The magnetic field on the rotor is either generated by current delivered through slip rings or by a permanent magnet.

The second type is the induction motor, which turns slightly slower than the supply frequency. The magnetic field on the rotor of this motor is created by an induced current. 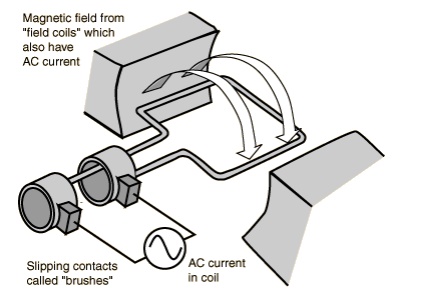 Induction ac motors are the simplest and most rugged electric motor and consists of two basic electrical assemblies: the wound stator and the rotor assembly. The induction ac motor derives its name from currents flowing in the secondary member (rotor) that are induced by alternating currents flowing in the primary member (stator). The combined electromagnetic effects of the stator and rotor currents produce the force to create rotation.

AC motors typically feature rotors, which consist of a laminated, cylindrical iron core with slots for receiving the conductors. The most common type of rotor has cast-aluminum conductors and short-circuiting end rings. This ac motor "squirrel cage" rotates when the moving magnetic field induces a current in the shorted conductors. The speed at which the ac motor magnetic field rotates is the synchronous speed of the ac motor and is determined by the number of poles in the stator and the frequency of the power supply: ns = 120f/p, where ns = synchronous speed, f = frequency, and p = the number of poles.

The supply is connected to the stator and the rotor received power by induction caused by the stator rotating flux, hence the motor obtains its name -induction motor. The stator consists of a cylindrical laminated & slotted core placed in a frame of rolled or cast steel. The frame provides mechanical protection and carries the terminal box and the end covers with bearings. In the slots of a 3-phase winding of insulated copper wire is distributed which can be wound for 2,4,6 etc. poles.

The rotor consists of a laminated and slotted core tightly pressed on the shaft. There are two general types of rotors:

The wound (or slip ring) rotor.

In the squirrel-cage rotor, the rotor winding consists of single copper or aluminium bars placed in the slots and short-circuited by end-rings on both sides of the rotor.

In the wound rotor, an insulated 3-phasewinding similar to the stator winding and for the same number of poles is placed in the rotor slots. The ends of the star-connected rotor winding are brought to three slip rings on the shaft so theta connection can be made to it for starting or speed control.