A DC motor is a device which converts electrical energy into mechanical energy.D.C. motors are motors that run on Direct Current from a battery or D.C. power supply. Direct Current is the term used to describe electricity at a constant voltage. A.C. motors run on Alternating Current, which oscillates with a fixed cycle between a positive and negative value. Electrical outlets provide A.C. power.

Permanent magnet DC motors utilize two or more brushes contacting a commutator which provides the direct current flow to the windings of the rotor, which in turn provide the desired magnetic repulsion/attraction with the permanent magnets located around the periphery of the motor.

The brushes are conventionally located in brush boxes and utilize a U-shaped spring which biases the brush into contact with the commutator. Permanent magnet brushless dc motors are widely used in a variety of applications due to their simplicity of design, high efficiency, and low noise. These motors operate by electronic commutation of stator windings rather than the conventional mechanical commutation accomplished by the pressing engagement of brushes against a rotating commutator.

A brushless DC motor basically consists of a shaft, a rotor assembly equipped with one or more permanent magnets arranged on the shaft, and a stator assembly which incorporates a stator component and phase windings. Rotating magnetic fields are formed by the currents applied to the coils.

The rotator is formed of at least one permanent magnet surrounded by the stator, wherein the rotator rotates within the stator. Two bearings are mounted at an axial distance to each other on the shaft to support the rotor assembly and stator assembly relative to each other. To achieve electronic commutation, brushless dc motor designs usually include an electronic controller for controlling the excitation of the stator windings.

There are different kinds of D.C. motors, but they all work on the same principles.When a permanent magnet is positioned around a loop of wire that is hooked up to a D.C. power source, we have the basics of a D.C. motor. In order to make the loop of wire spin, we have to connect a battery or DC power supply between its ends, and support it so it can spin about its axis. To allow the rotor to turn without twisting the wires, the ends of the wire loop are connected to a set of contacts called the commutator, which rubs against a set of conductors called the brushes. The brushes make electrical contact with the commutator as it spins, and are connected to the positive and negative leads of the power source, allowing electricity to flow through the loop. The electricity flowing through the loop creates a magnetic field that interacts with the magnetic field of the permanent magnet to make the loop spin.

It is based on the principle that when a current-carrying conductor is placed in a magnetic field, it experiences a mechanical force whose direction is given by Fleming's Left-hand rule and whose magnitude is given by

Where B is the magnetic field in weber/m2.

I is the current in amperes and

l is the length of the coil in meter.

The force, current and the magnetic field are all in different directions. 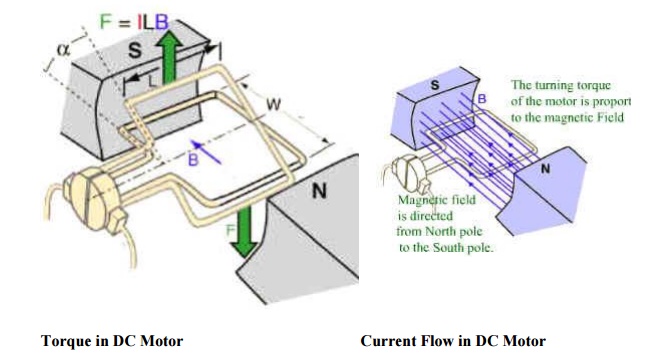 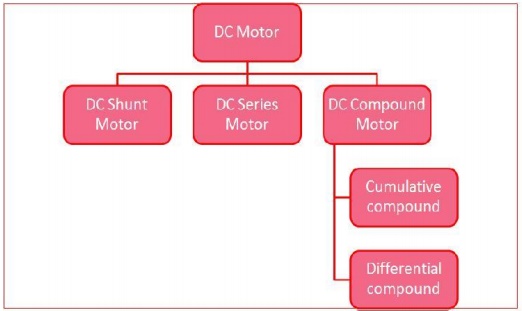 DC motors are more common than we may think. A car may have as many as 20 DC motors to drive fans, seats, and windows. They come in three different types, classified according to the electrical circuit used. In the shunt motor, the armature and field windings are connected in parallel, and so the currents through each are relatively independent. The current through the field winding can be controlled with a field rheostat (variable resistor), thus allowing a wide variation in the motor speed over a large range of load conditions. This type of motor is used for driving machine tools or fans, which require a wide range of speeds.

In the series motor, the field winding is connected in series with the armature winding, resulting in a very high starting torque since both the armature current and field strength run at their maximum. However, once the armature starts to rotate, the counter EMF reduces the current in the circuit, thus reducing the field strength. The series motor is used where a large starting torque is required, such as in automobile starter motors, cranes, and hoists.

The compound motor is a combination of the series and shunt motors, having parallel and series field windings. This type of motor has a high starting torque and the ability to vary the speed and is used in situations requiring both these properties such as punch presses, conveyors and elevators.