The main features of the new trade policy as it has evolved over the years since 1991 are as follows:

Trade Policy Reforms: The main features of the new trade policy as it has evolved over the years since 1991 are as follows:

Free imports and exports: Prior to 1991, in India imports were regulated. From 1992, imports were regulated by a limited negative list. For instance, the trade policy of 1 April 1992 freed imports of almost all intermediate and capital goods. Only 71 items remained restricted. This would affect the domestic industries.

percent to 150 percent. The process of lowering the customs tariffs was carried further in successive budgets. This also affected the domestic industries.

The Government of India, Ministry of Commerce and Industry announced New Foreign Trade Policy on 01st April 2015 for the period of 2015-2020.

The new EXIM policy has been formulated focusing on increasing in exports scenario, boosting production and supporting the concepts like Make in India and Digital India.

·           Reduce export obligations by 25% and give boost to domestic manufacturing supporting the “Make in India” concept.

·           As a step to Digital India concept, online procedure to upload digitally signed document by CA/CS/Cost Accountant are developed and further mobile app for filing tax, stamp duty has been developed.

·           Repeated submission of physical copies of documents available on Exporter Importer Profile is not required.

With a view to overcome the shortcomings experienced on account of the multiplicity of controls and clearances, absence of world-class infrastructure, and an unstable fiscal regime and with a view to attract larger foreign investments in India, the Special Economic Zones (SEZs) Policy was announced in April 2000.

As part of the economic reforms, the system of taking over land by the government for commercial and industrial purposes was introduced in the country. As per the Special Economic Zones Act of 2005, the government has so far notified about 400 such zones in the country. Since the SEZ deprives the farmers of their land and livelihood, it is harmful to agriculture. In order to promote export and industrial growth in line with globalisation the SEZ was introduced in many countries. 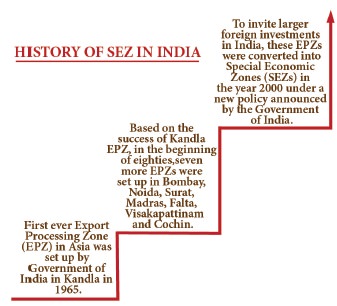 India was one of the first in Asia to recognize the effectiveness of the Export Processing Zone (EPZ) model in promoting exports, with Asia’s first EPZ set up in Kandla in 1965. The broad range of SEZ covers free trade zones, export processing zones, industrial parks, economic and technology development zones, high-tech zones, science and innovation parks, free ports, enterprise zones, and others.

b.        Administrated by single body/ authority

f.          Greater freedom to the firms located in SEZs. As a result, they need not respect the Government’s rules and regulations.

The social and environmental impacts were disastrous.