The policy has brought changes in the following aspects of industrial regulation:

2.        Dereservation of the industrial sector 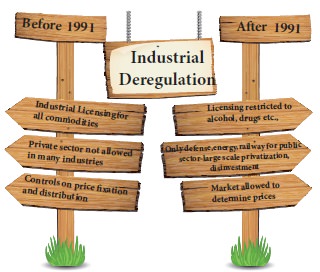 Reforms related to the Public sector enterprises: Reforms in the public sector were aimed at enhancing efficiency and competitiveness of the sector. The government identified strategic and priority areas for the public sector to concentrate. Loss making PSUs were sold to the private sector.

Abolition of MRTP Act: The New Industrial Policy of 1991 has abolished the Monopoly and Restrictive Trade Practices Act 1969. In 2010, the Competition Commission has emerged as the watchdog in monitoring competitive practices in the economy.

The policy caused big changes including emergence of a strong and competitive private sector and a sizable number of foreign companies in India.

Foreign investment policy: Another major feature of the economic reform was red carpet welcome to foreign investment and foreign technology. This measure has enhanced the industrial competition and improved business environment in the country. Foreign investment including FDI and FPI were allowed. In 1991, the government announced a specified list of high-technology and high-investment priority industries wherein automatic permission was granted for foreign direct investment (FDI) upto 51 percent foreign equity. The limit was raised to 74 percent and subsequently to 100 percent for many of these industries. Moreover, many new industries have been added to the list over the years.

Foreign Investment Promotion Board (FIPB) has been set up to negotiate with international firms and approve foreign direct investment in select areas.