A key element in the stabilization effort was to restore fiscal discipline.

A key element in the stabilization effort was to restore fiscal discipline. It means reduction of fiscal deficit to the extent of just 3% of GDP, as suggested by Fund Bank Policies. In this way, the budget aimed at containing government expenditure and augmenting revenues; reversing the downtrend in the share of direct taxes to total tax revenues and curbing conspicuous consumption. Some of the important policy initiatives introduced for correcting the fiscal imbalance were: reduction in fertilizer subsidy, abolition of subsidy on sugar and disinvestment of a part of the government’s equity holdings in select public sector undertakings. Gradually expenditures on welfare measures were reduced; takes on corporate sectors were reduced; and takes on poor people were increased.

Goods and Services Tax (GST) is defined as the tax levied when a consumer buys a good or service. It is proposed to be a comprehensive indirect tax levied on manufacture, sale and consumption of goods as well as services. GST aims to replace all indirect taxes levied on goods and services by the Indian Central and State governments. GST would eliminatie the cascading effect of taxes on the production and distribution of goods and services. It is also a “one-point tax” Unlike VAT which was a multipoint tax.

The Goods and Service Tax Act was passed in the Parliament on 29th March 2017. The Act came into effect on 1st July 2017.The motto is one nation, one market, one tax. 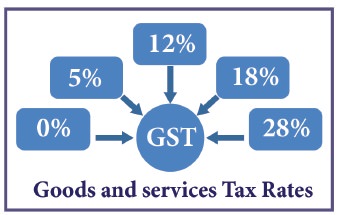