The control of traction motors for starting and for smooth acceleration is very much essential to avoid damage to the motors.

The control of traction motors for starting and for smooth acceleration is very much essential to avoid damage to the motors. The control equipment is provided for manual and automatic operation. Usually a master controller is used for the purpose.

The curve drawn between speed and time is called the speed-time-curve. The speed-time curve gives complete information of the motion of the train. The curve gives the speed at various instants after the start of run directly. Slop of the curve at any point gives the acceleration at the corresponding instant or speed. The area covered by the curve, the time axis and the ordinates through the instants between which the time is taken, represents the distance covered in the corresponding time interval. 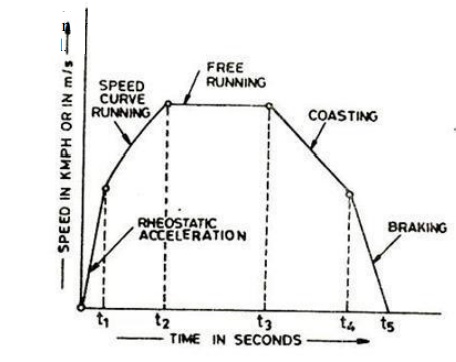 (b)Speed curve running or acceleration on the speed curve

From  starting  to  the  stage  when  locomotive  attains  maximum  speed,  the  period  is  known  as acceleration period, as the vehicle is constantly accelerated. This is represented by OA portion of the curve and time duration is t1.

During this period the motor develops enough torque to overcome the friction and wind resistance and hence the locomotive runs at constant speed. This is shown by the portion AB of the curve.

When the locomotive is running at certain speed, if the motor is switch off, due to inertia the vehicle will continue to run, of course with little deceleration due to friction and windage.

The locomotive is retarded to stop it within short distance and at a particular spot. The shape of the curve will change depending upon the distance between consecutive stations .

It is the curve drawn between speed of train in km/hour along y-axis and time in seconds along x-axis.

The speed time curve gives complete information of the motion of the train.

This curve gives the speed at various times after the start and run directly.

The distance travelled by the train during a given interval of time can be obtained by determining the area between the curve and the time axis corresponding to this interval.

A typical speed time curve for main line service is shown in fig. This curve consists of five sections.

During this period of run (0 to t1), starting resistance is gradually cut so that the motor current is limited to a certain value and the voltage across the motor is gradually increased and the traction motor accelerates from rest.

To cut the starting resistance, the starter handle has to be moved from one notch to another. Hence this period is called notching up period.

The acceleration is almost uniform during this period.

Now the torque decreases and speed increases according to the speed torque characteristics of the motor.

Now the acceleration gradually decreases with the increase in speed and finally reaches the required torque for the movement of the train (at time t2).

At the end of free running period supply to the motor is cut off and the train is allowed to run under its own kinetic energy.

Due to train resistance speed of the train gradually decreases.

The rate of decreasing of speed during this period is known as “coasting retardation”.

At the end of coasting period the brakes are applied to bring the train to stop.

During this period speed decreases rapidly and finally reduces to zero.

There are three types of electric traction services.

In this type of service the distance between two successive stations is in the range of 1.5 km to 8 km. Fig represents speed-time curve for sub-urban service.

Free running period is not possible and coasting period will be comparatively longer than urban service.

In city service the distance between the two stations is very short i.e., between 0.75 to 1 km.

The time required for this run between the adjacent and retardation should be sufficient high.

Fig shows the speed-time curve for urban or city service. It will be seen that there will be no free running period.

The coasting period is also small.

The effective efforts required to run a train on track are

Let the effective mass of train = Me ton

While moving, the train has to overcome the opposing force due to the surface friction and wind resistance.

The train resistance depends upon various factors such as shape, size, condition of track etc.

Where M = Mass of train in tone

Consider that an electric train is moving upwards on a slope

The dead mass of the train along the slope will tend to bring it downward.

To overcome this effect of gravity, tractive effort are required in opposite direction.

Tractive effort to overcome the effect of gravity = Fg

Where g is the acceleration due to gravity

Θ is the angle of slope.